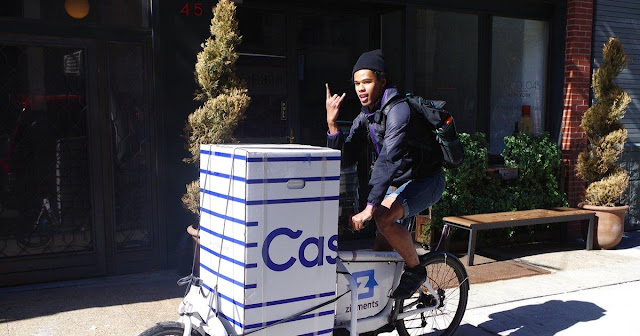 Last week we jumped on the bandwagon and bought a Casper mattress. It arrived on Friday and we got it set up on Saturday.

About 15 years ago, the wife and I bought a very fancy wrought iron bed. To go along with it, we sprung for a high-end mattress. One of those thick, pillow-top jobs. It was pretty much top of the line and we spent over $3000 on just the mattress and box spring. It was superb for the first few years. Then it slowly started sagging. It took about 5 or 6 years before the sag was bad enough that we returned it under warranty. That's ridiculous for such an expensive mattress, but at least it had a nice warranty. The store replaced it for a brand new model. Unfortunately we had the same experience with the replacement. It's now sagging very badly. We'd been wanting a new mattress for quite a few years, but we had been putting it off due to the cost.

Then I heard Marc Maron do an advertisement for Casper on the WTF podcast. I was intrigued. So I started looking into the product and the company.

If you're unaware, Casper is a veritable business juggernaut. They've literally redefined the market. I would call them the Starbucks of mattresses (minus any negative connotations you may have about Starbucks). For people like me who can recall the '80s or earlier, there was a time when coffee meant "Folgers". At that time, coffee was a completely uninteresting commodity product, like flour or beans. Then Starbucks came along and made buying a cup of coffee something that people actually cared about, looked forward to, and developed strong opinions on. Casper has basically done the same thing for mattresses. The marketer in me just marvels at what Casper has done. In fact, the initial version of this post went too deep into everything I find fascinating about their business, but I thought better of it. (You're welcome!)

It's not just marketing either, although they do an amazing job at that. The product has a lot of interesting engineering behind it. And the reviews have been mostly enthusiastic. They have what appears to be a great product at an amazing price (less than half what I paid for my fancy schmantzy mattress 15 years ago!).

Before I stumbled on this company, mattresses were one product that I'd insist on trying out in person before making a purchase. But Casper has taken just about all the risk out of buying one over the 'Net that they possibly can. First, their web site has a ton of information about the product and a bunch of customer reviews (including negative ones). Second, shipping is included in the price. Third, you get 100 days to figure out if the mattress will work for you. Finally, if you decide not to keep it, not only will Casper refund your money, they will arrange and pay for pick up of their mattress. (As it turns out, they will either donate it or recycle it, which is cool). The only thing you're out is the time. Most brick-and-mortar mattress stores don't have nearly as nice a reurn policy.

The unboxing is actually interesting. They package the mattress by inserting it into some kind of machine that compresses it, pushing out all the air and greatly reducing its volume. It's sealed in a thick, air-tight plastic bag, rolled up, and put into a box. They provide a safety letter opener so you can cut off the plastic bag without damaging the mattress. When you cut open the bag, the mattress takes a big deep breath of air and self-inflates in like a minute. It almost looks alive! It's novel enough to watch that there are literally hundreds of Casper unboxing videos on YouTube. I also bought Casper's foundation. It doesn't self-inflate but it is amazingly easy to assemble. It didn't even require tools! I got the entire bed set up in maybe 20 minutes. The hardest part was getting the boxes upstairs to our bedroom. The king-size mattress box weighs 112 pounds and carrying it up a flight of stairs by yourself is not fun.

So, how does the bed feel? Does it live up to the hype?

Well, I've only slept on it for one night so the jury's still out. It was a workout to get my old king-size mattress and box spring off the bed and out of the way, and get the Casper upstairs and on the bed. Our wrought iron bed is built in such a way that you have to lift a mattress out of the bed at an inclined angle, instead of just sliding it off. So it takes some muscle. As a result, the new mattress got a good test from my over-exerted and slightly achy back. I'd say that first impressions are positive. The Casper is noticeably firmer than the mattress it replaces. But it seems to have enough give in the top layers to avoid pressure points and provide consistent support when I sleep on my side. I need more time on it to see if the extra firmness will be an issue or not. But I've got 3 months to decide. The real test will be with my wife since she has back issues.

The Casper is not as thick as my old mattress. It's 10 inches thick, whereas my old mattress was probably 15" or more. So my bed is now considerably lower. I don't have a problem with that, Just something to get used to. One common complaint with the Casper is that there isn't much edge support. A traditional mattress has a stiff casing around the perimeter that provides firmer support on the edge of the mattress. A Casper doesn't have that, so when you sit on the edge of the bed you sink further. Honestly, it was noticeable but I can't understand what people find objectionable about it. It's really not a big deal to me. I don't spend a lot of time sitting at the edge of my bed, and for the times I do (like when I'm putting on my shoes or something), it's fine.

So that's my initial assessment. I'll post some follow-ups in the future...