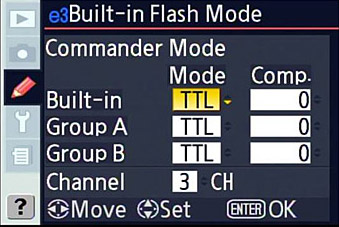 My very first experiments with digital flash photography were pretty miserable. They tended to be way off-target from what I wanted, wildly inconsistent from shot to shot, and had egregious noise, blur, or other exposure-related problems. I’m fairly certain I could poop a better flash photo today.

Back then, I made the mistake that I suspect a lot of flash newbies make: I just stuck a flash on the camera, used all my usual settings, and expected it to just work reasonably well. After all, flash is just photography with a strobe light, right?

When I looked at the EXIF information on those shots, I noticed some very odd shutter speed and ISO choices being made by the camera. The settings didn’t make much sense. It was like the camera had lost its little silicon mind.

In reality, the camera was using very different algorithms to choose exposure settings with flash than without. And I didn't know what was going on, so I couldn't work out through experimentation the logic that the camera was employing. It seemed very unpredictable.

That was a big issue.

You see, if the camera just gives you the result you want every time, you don’t need to understand and predict its behavior. But cameras often give you results that are very different from what you want, especially with flash. So you must be able to anticipate how it’s going to screw it up so you counteract its wrongheadedness. You can work around gotchas, idiosyncrasies, and oddball behaviors as long as they’re predictable. But you’re pretty well screwed if they’re not.

I realized at that point that flash photography was going to take as much study and practice as natural light photography and that I better get crackin’. Not long after, I found the Strobist website and several books. And it wasn’t long after that that I started getting a handle on it.

Early on in the flash learning curve, I figured out one fundamental issue with the current state of technology:

Automated modes don't play nice with each other.

Any automation mode on its own works mostly well. But when you start combining them – like using aperture-priority, auto-ISO, and I-TTL BL flash all at once – they can interact, interfere, and subvert each other. It’s like watching The Three Stooges trying to hang wallpaper. Their individual efforts to get something done screw up the others' efforts.

When an automated mode doesn't get it right, you're supposed to use one of the compensation controls (exposure compensation or flash exposure compensation) to nudge the camera in the right direction. But your efforts to compensate are likely to be thwarted by the other automation modes. Congratulations, you're now the Fourth Stooge!

After a fair amount of playing the Fourth Stooge, it occurred to me that there is a much more straightforward way to go about it.

You see, for all their fancy names and technical sophistication, automation modes only determine a small handful of camera settings. Just four – aperture, shutter speed, ISO, and flash power. That’s it!

It seemed to me that it would be a lot easier to set these 4 parameters directly myself, than to try to think like the Stooges, predict how they’re going to screw things up, and trick them into getting the wallpaper up successfully despite themselves. That’s what all the compensation controls do really – they enable you to correct the Stooges' camera’s incompetence.

That realization led to my preferred way of working with flash: Manual exposure mode, manual ISO, and manual flash. Which I just call Manual Everything.

As I said before, any single automation mode by itself usually works pretty well, just as Moe might have done alright if not for the other Stooges. For example, i-TTL flash combined with manual exposure and ISO makes fill flash very simple and fast to dial in. So automation does have some advantages.

But there are three advantages that Manual Everything has that the automated exposure and flash modes can’t touch. One, it’s very predictable. If you learn what everything does, you’re almost never surprised by what you get, and you can adjust the four settings to get exactly what you want very deterministically. Two, it’s rock-solid consistent. As long as you let the flash fully recycle between shots, the exposure will be the same every time. That will save you hours in post-processing. The third advantage is that Manual Everything lets you unleash the Kraken – that is, you can blast the full power of your flash on demand. For some reason, I’ve never been able get the same level of power when using TTL flash and auto exposure modes.

A positive side-effect is that Manual Everything cures you very quickly of any lingering intimidation you might harbor with manual controls. And that is a big advantage for a lot of photographic situations – with flash and without.