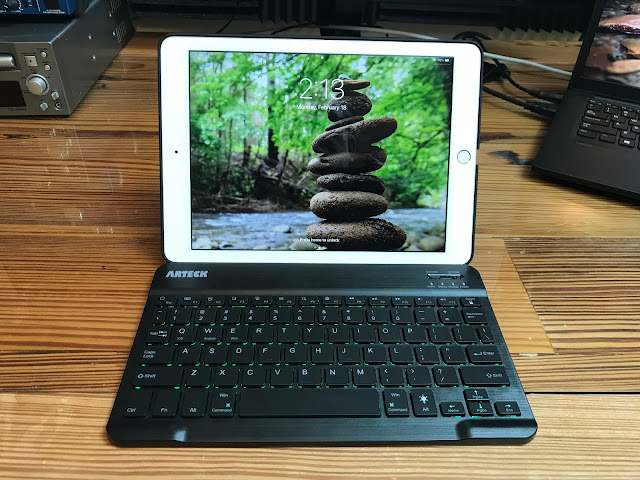 I recently got a new 9.7" iPad to replace my old iPad Mini that bit the dust last fall. I liked the Mini for web surfing, reading e-books, watching movies on planes, and running some selected apps. But for obvious reasons I never liked it for anything requiring a lot of typing. However, the new iPad's extra screen real estate made me think that, with a keyboard, it could be a viable lightweight substitute for a laptop when traveling. So I started looking at Bluetooth keyboards.

Initially I considered a combination keyboard/case. But after pondering it a little, I realized that having a keyboard built into the case, while convenient, would force me to carry the extra bulk and weight even when I don't need a keyboard. And that would compromise one of the biggest advantages of a tablet. So I decided to get a standalone keyboard instead.

I wanted something small and lightweight, but still usable for touch-typing. I don't have RSI and I'm not terribly picky about keyboard feel, but the keyboard did need to be big enough and nice-feeling enough that I wouldn't avoid typing on it.

There are a ton of Bluetooth keyboards on Amazon. It's a little overwhelming actually. But filtering out the ones with poor user ratings culls down the list really quickly. One of the most highly regarded keyboards according to user reviews, the Arteck HB030B, was only $20!  So I bought it thinking, "Well, if it's crap, I'm only out twenty bucks."

I'm happy to report that it's not crap. 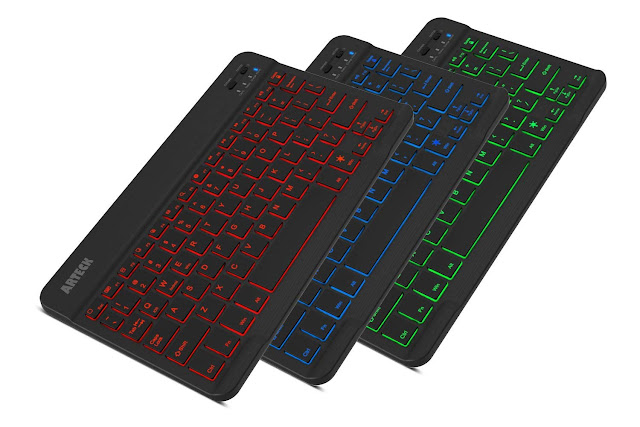 It's actually quite decent. It's extremely thin and lightweight, but it doesn't feel flimsy due to the metal back cover which provides structural rigidity and a slight amount of reassuring heft.

The key action feels pretty good to me. No, it's not as good as a MacBook. But the key travel length feels about right and there's a bit of tactile feedback without it being overly clicky. In fact this $20 keyboard actually feels better than my Lenovo Z50 laptop, which is a pretty damning indictment of the Lenovo frankly.

The HB030B works with iOS, Android, MacOS, and Windows (but not Windows 8 Mobile) and Bluetooth pairing is super-easy. It also comes with little stick-on rubber feet, which are a must to keep it from sliding around on your desk while you type.

Power is courtesy of a built-in lithium-ion battery, which is rechargeable via USB. Unfortunately the battery is not user replaceable. This means that when the battery wears out and stops holding a charge, I'll have to replace the entire keyboard. Drag. But once again, $20.

The HB030B backlights the keys in any of 7 different colors (a few of which are subtle variations on the others). The backlighting has two power levels and it works great. But you'd be well-advised to memorize the location of the keys needed to turn it on because finding them by sight on a dark airplane isn't easy. 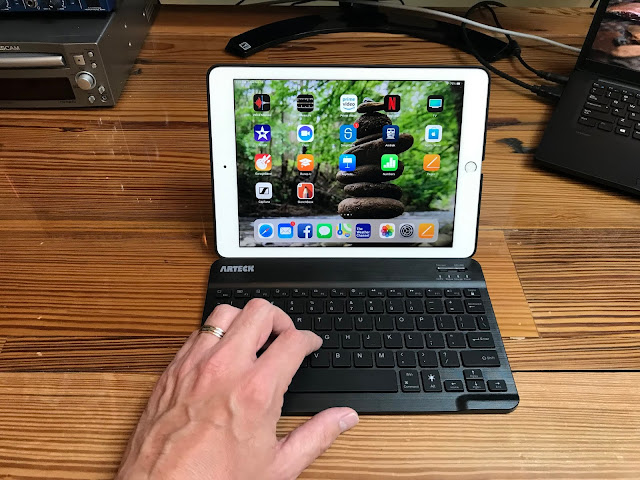 Although it is considerably smaller than a regular laptop keyboard, I can quite reasonably touch-type on it. And I have very large hands. You can see from the photo above just how comparatively small the keyboard is. It is truly dinky! The combo is kind of cute, like a laptop that was accidentally washed in the hot cycle. Now, if I were writing a book, of course I'd want to use a full-size keyboard. But for 95% of what I type – e-mails, blog posts, short documents, notes, online forms, and so on – the HB030B is just big enough that I can type comfortably and accurately, without thinking of it as a burden. For my purposes, Arteck pretty much nailed it on the trade-off between compactness and usability.

And I gotta say, using a keyboard with the iPad is awesome. Heck, just avoiding the boot time of my laptop is worth the $20. But filling out online forms and writing e-mails is so much easier on a real keyboard. And I love having access to the keyboard shortcuts I use on my computer, like keyboard-based copy/paste/undo/redo and shift-cursor text selection. It really speeds things up and is way easier and more accurate than futzing around with the iOS text selection gestures.

Speaking of which, learning keyboard shortcuts for common iPad functions is a very good idea. It keeps you from having to move your hands constantly between the keyboard and the touchscreen. Things like exiting an app, switching between apps, and using Spotlight Search to launch an app can all be done from the keyboard and doing so will make things flows a lot better. Also, a neat feature of iOS (not the HB030B) is holding down the Command key within any app brings up a list of the Command key shortcuts available in that app. Very handy.

There is at least one way in which the iPad/keyboard combo doesn't work well as a laptop substitute: It's not easy to use on your lap! Between the miniature size, the way my iPad case functions as a stand, and the fact that the combo is in two pieces, it just doesn't work well unless its on a flat surface. But there's a very easy fix: Just grab a coffee table book or a kitchen cutting board and put that on your lap first.

Since this was supposed to be for travel, I also bought a form-fitting Mchoi case, which was only another $15. It's a padded, rigid-sided, zippered case that fits the HB030B and USB recharging cable perfectly. It's great for throwing the keyboard into my backpack and not worrying about it getting broken. My only complaint with the case is that it comes with a foul chemical odor that takes awhile to wear off.

In summary, the HB030B is a great option for use with a tablet or smart phone. It has reasonable build quality, a backlit keyboard, and a decent key feel. Highly recommended, and at $20 a no-brainer.