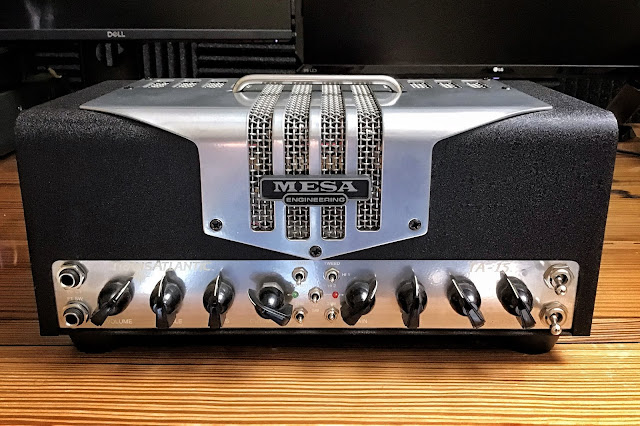 Released in 2010, the TransAtlantic TA-15 was Mesa's first foray into lunchbox style amps. In true Mesa fashion, they brought something new to the party with several interesting features and a unique look. The TA-15 is designed to recreate sounds from classic Fender, Vox, and Marshall amps. And it provides multiple output power options that allow you to scale the amp from a late night bedroom jam, to a studio recording session, to a club gig, by just flipping a couple of switches.

I was intrigued by this amp from the time Mesa launched it. Since my main amps for the last 12 years have been a Vox AC30 descendant, a '76 Marshall JMP, and a '63 Fender Concert, the sounds that the TA-15 aspired to were right up my alley. And the idea of getting those sounds from a small, lightweight rig was very attractive. Well, 10 years after it was introduced and well after it went out of production, I finally bought a TA-15. Here are my impressions.

The TA-15 is one nice bit of industrial design. When you first lay eyes on it, you’re struck by how tiny it is. It’s downright cute, like somebody accidentally washed an amp in the hot cycle. It's dimensions are about 12"W x 6"H x 7”D. Visualize that for a second. That's compact! At that size and only 12 lbs it's a very easy carry, especially with the included gig bag.

Once you get over the size, you notice that it’s actually pretty cool looking. With its black wrinkle paint, stainless steel grille and control panel, retractable steel handle, chickenhead knobs, and blue internal illumination, it has a vintage industrial aesthetic. It would look totally at home on the set of The Rocketeer.

But the TA-15 is more than a pretty face. The steel chassis and cover are very rugged and provide excellent ventilation. The only concern I have with the design is that the cabinet provides no recessing to protect the knobs and switches. You have to mind you don't bump it against anything, lest this happen to you.

The circuitry inside is typical Mesa build quality, which is to say very good as mass production amps go. It uses a thick PC board, through-hole soldered components, and flying leads to the chassis-mounted pots, jacks, and switches. The electronic components are of decent quality. The PC board is pretty densely populated, which is a consequence of its small size and high feature count. I expect it will be harder and more expensive to work on should it ever require service.

The TA-15 has two channels covering 5 voicing modes that reconfigure the channel circuitry to mimic different vintage amps. The channels are footswitchable, but the modes can only be selected via frontpanel switches.

Channel 1 has two modes, "Normal" and "Top BST". Both are based on the Vox AC30 Top Boost circuit, with "Top BST" being the gainier of the two. This channel has volume, treble, bass, and a dual-function cut/master control. When pushed in, the cut/master knob acts as a cut control. If you're not familiar, a cut control is a Vox invention that is similar in function to a reverse presence control, although electronically it works in a very different way. Pulling out the knob turns it into a master volume control enabling you to wind up the gain with the volume and then set the overall output with the master. When the cut/master is pulled, the cut setting is fixed at a preset level, which is at about 11:00.

Channel 2 has a different set of modes. The first is called "Tweed" and it definitely has an old school Fender vibe. "Hi 1" is a vintage Marshall style sound. And "Hi 2" is a supposed to be similar to a Boogie Mark Series lead tone. Channel two has gain,  treble, bass, and master controls. Notice on this channel Mesa calls it "gain" instead of "volume", which is nerdy and pointless. But at least they kept the EQ controls in the same order, unlike Rivera who puts them in a different order (to emulate the control layout of Fender and Marshall amps for the clean and dirty channels respectively), which is nerdy and outright annoying.

The power amp section features two EL84 tubes that can be configured to deliver 5, 15, or 25 watts. These power settings are channel-assignable and are great for optimizing the amp for the size of room and enabling power tube distortion even at low volume levels. Even better, they also change the tone and feel of the amp, adding even more versatility.

There's a front panel switch that selects the active channel and has a third setting for selecting channels via the included footswitch. The footswitch plugs into a jack below the guitar input jack, and is a simple latching switch with a red LED that lights up when you switch to channel 2.

The back panel is the most basic of any recent Mesa amp. There's the usual IEC A/C power jack and fuse holder, and two speaker output jacks, one 8-ohm and one 4-ohm. That's it. About as simple as it gets. 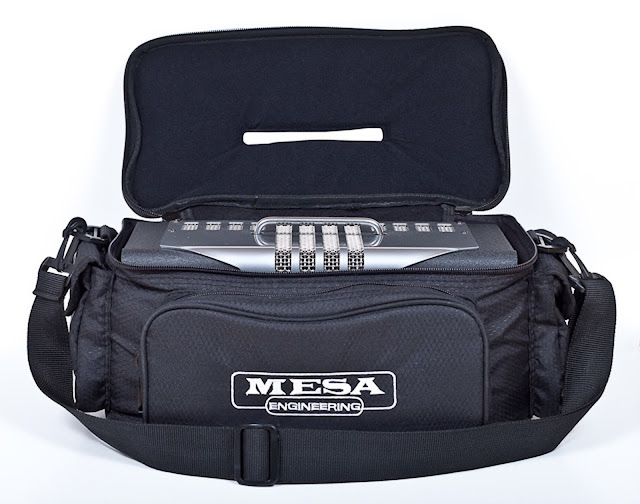 The TA-15 comes with a nicely padded, rip-stop nylon gig bag that fits the amp like a glove and comes with a few pockets to hold cables, footswitch, and a couple of other small accessories. It's a thoughtful addition and enhances the portability of the amp. The only thing I don't really care for is the narrow, unpadded shoulder strap. As a frequent traveler, I can tell you that 12 pounds hanging off a 1.5" wide strip of your shoulder gets uncomfortable quickly. I recommend buying a replacement strap.

The obvious missing features on the TA-15 are channel midrange controls, reverb, and an effect loop. To be honest, I don't miss the mid controls. I've spent a lot of time with vintage and stripped-down boutique amps that don't have them. If an amp has a good core sound, I can almost always set the bass and treble controls to effectively get the relative level of midrange I need. However, reverb and an effects loop are definitely missed! I think the TA-15 would benefit greatly from having them, especially an effects loop. But the size of the amp does force some compromises and all things considered, if Mesa had to jettison features due to size, I think they chose the right ones. The TA-15's big brother, the TA-30, is a bit larger and has these features as well as a couple of additional ones.

All right, let's get down to how this thing sounds. The best way to do that is to tour each of the voicing modes. 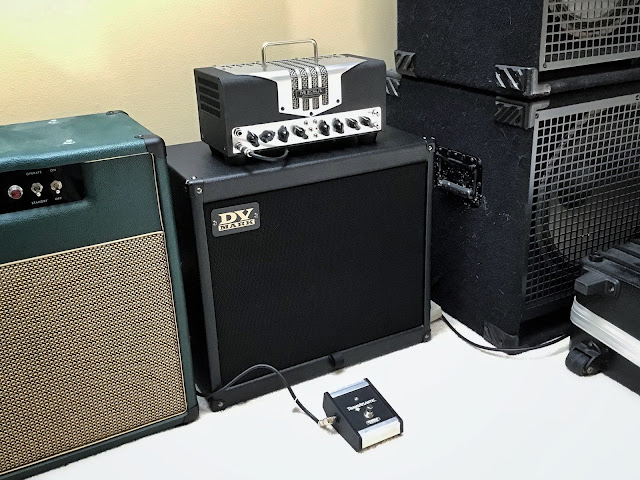 Channel 1's Normal mode is the clean Vox sound. Think Beatles or U2. This mode definitely delivers the harmonic-loaded shimmer and chime that is the Vox AC30's stock in trade. There is a decent amount of headroom available with this mode although past noon on the volume control brings on mild to moderate overdrive. Pairing this mode with the 15-watt power setting seals the deal on the Vox impression with class-A EL-84s, cathode bias, and no negative feedback. That's the Vox formula to a T. Not surprisingly, this mode along with Top BST, are the most accurate ones at sounding like their aspirational targets.

To my ears, the Top BST mode is simply a more aggressive and gainier version of the Top Boost sound. At more moderate settings of the volume knob, it is perfect for mildly overdriven arpeggiated chords ala early Tom Petty or REM. Wound up, it is capable of terrific crunch tones with more of a Queen vibe. You can even deliver Malcolm Young style crunch on this channel. At all times, clean sounds are always just a roll of the guitar volume away though, which I love. Top BST is my favorite mode on the TA-15. It's highly touch-sensitive and transitions linearly from sweet jangle and chime to crunchy, warm, and aggressive as you raise the gain level. Coupled with the 15-watt power setting, it is very satisfying sound.

If the Vox impressions are the most convincing, the Tweed mode's Fender impressions are probably the least. But don't get me wrong: I wouldn't call the Tweed mode "bad" and many TA-15 players consider it their favorite. Even more than the other modes, Tweed depends heavily on how you dial in the gain, EQ, and power settings. You can get grinding, low-fi overdrive sounds similar to a cranked-up tweed Champ by using low bass and treble levels, higher gain levels, and the 5-watt setting. Tweed Deluxe: Switch to 15 watts, back off the gain slightly, and bring up the treble control to somewhere in the 10:30 to 12:00 range. Want a more blackface Fender sound? Switch to 25 watts, set the gain level to 10:00 or lower, and set bass and treble around 2:00 to scoop the midrange a bit. As you can tell, the Tweed mode covers a ton of ground and can definitely be dialed in for some great sounds. I just think those sounds are a bit more off-target from their Fender aspirations than the other modes. It will get you in the ballpark, but not right on home plate.

The Hi 1 mode is vintage Marshall territory. This is my 2nd favorite mode. It's most comparable to something like a Marshall model 1974 or 2061 - those small, EL84-powered Marshalls from the '60s and '70s respectively. Those amps definitely sound like Marshalls but their headroom, low-end response, and general sonic brawniness don't quite match the big iron from the 50 and 100 watt heads. I would say that the Hi 1 mode sounds similar to a 2061, but with way higher levels of gain on tap. This mode sound good at medium to high levels of gain and you can convincingly dial up your go-to Marshall sounds from AC/DC to Van Halen. This mode pairs best with either the 15- or 25-watt settings. 15-watts unleashes more harmonics which is cool sounding, but the 25-watt setting has that nice stout attack and low-mid girth that sells the Marshall impression better, especially with a smaller speaker cabinet.

Hi 2 is billed as a re-creation of the Boogie Mark Series lead sound. Frankly I don't know about that. To me, it sounds more like a mildly tweaked variation of the Hi 1 mode. The gain level is pretty much the same. It just has a little more low-end girth, which does work really well for fattening up single-string leads. And that's what I think Hi 2 is best for – lead playing. It's also good when you have a small speaker cabinet and just want a more beefy sound. Hi 2 works best with 25-watt mode - that pairing starts to sound like a much bigger amp than it is.

The TA-15 and the TransAtlantic product line were well-received in the press and the scuttlebutt online seemed very positive overall. But it had a fairly short run, with production ceasing after 5 years in 2015. At the time of its release the TA-15 was the most feature-laden, all-tube, lunchbox amp on the market. It sounded great, and it looked fantastic. So why did it only last 5 years? I don't have any empirical data back it up, but I think it came down to 3 reasons:
My impression is that the amp sold well initially but didn't have a lot of staying power sales-wise. I speculate that it quickly penetrated the specialized segment of the market that was interested in it and then plateaued. 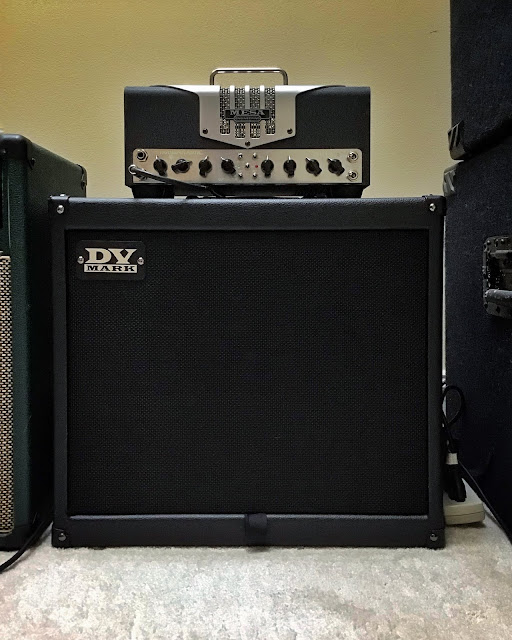 For my own purposes, I'll say this: There have been a lot of different takes on the mini-sized amp. I've played several and have owned a few. But the TA-15 really hits the sweet spot for me. It very credibly imitates my 3 favorite amps, but in a much smaller, lighter, more nimble package. I paired it with a DV Neoclassic 112 cabinet – one of the lightest 1x12 cabs available – and with that cab I can’t think of any other all-tube rig that matches its combination of tone, versatility, and portability. For me, it is the ultimate rehearsal, small gig, and backup amp.