The Move-In Has Begun. Slowy.

My wife's desk came in, so my old handmade desk has been reclaimed for the studio.  I spent yesterday evening touching up it's finish (it's a wax finish which can need re-application from time to time).  It looks great in the studio.  With the wood floor, the desk, and the aluminum photography prints I'm going to hang, I think this studio is going to have a more classy vibe than Suburban Din. 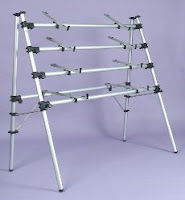 I also built an extension shelf for my studio keyboard stand.  The stand is one of those A-frame stands that were the shiznit in the '80s and early '90s.  Back in those days, keyboards were bigger and heavier, and you might use several of them because their sounds were more specialized.  The A-frame stands were wonderful for that because they carried a lot of weight and were very configurable.  But they were also a pain in the ass to gig with because they took too long to set up and they disassembled into several pieces that you had to keep track of.  Nowadays with sample-based instruments and/or laptop-based rigs, you really only need one or two keyboards to gig with.  And a much simpler and smaller stand will do just fine.  However, A-frames still make great studio stands because of the configurability.  Plus, in a studio situation you're not going to be setting them up and tearing them down so much.  Anyway, I love my old A-frame, but it only accommodates 61-key keyboards.  It's not wide enough to hold my VR-760.  So awhile back I figured out that I could mount a sheet of plywood on the stand to extend a "shelf" out from the front of the stand, on which I could put the VR-760.  It worked like a charm, but the sheet of plywood I cut for that purpose was sacrificed as a work top for finishing cabinets when it was sitting in the garage waiting for the studio to be built.  So I needed to make another one.  This one has some arms built onto it to extend its length a little further, allowing me to save some money by using a 2' x 4' sheet of plywood, instead of a 4' x 4'.

This weekend I hope to move a lot more of my stuff into the place!
Labels: music photography