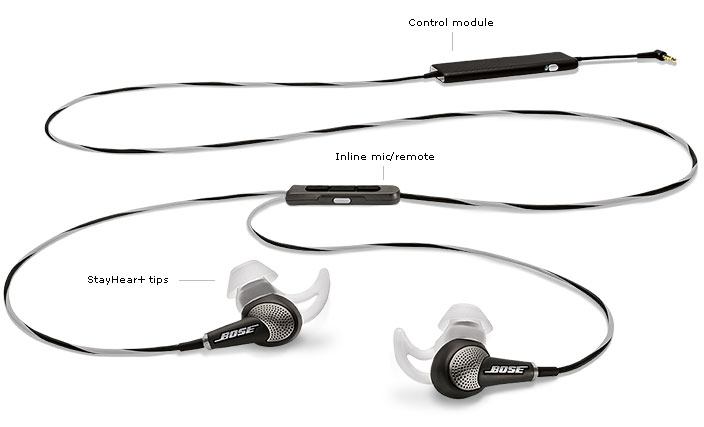 Anything that increases signal-to-noise ratio is good in my book. That applies to life generally, as well as to audio specifically. But this post is going to concentrate on audio.

I've lusted after Bose noise canceling headphones since they first came out in 2000. One of my bleeding edge friends bought a pair and I thought they were amazing. But I could never bring myself to drop 3 Benjamins on them.

However, life has been slowly pushing me towards them for years. First, I've become a total podcast junkie. Podcasts make my 26 mile commute bearable. However, my Honda CR-V is just terrible for road noise. I'd been using noise isolating in-ear buds, which work pretty well. But I've also been traveling a lot for work lately and getting crappy airline seats near the engines. For this, in-ear buds push the discomfort threshold for me. An hour commute is just doable; three hours on a plane is too much.  Finally and most convincingly, one of my work buddies recently left his headphones at the hotel we were staying at and sent me an e-mail asking me to pick them up at the front desk when I checked out and bring them back to Houston for him. It was a set of Bose QuietComfort 15's. Of course I had to try them out again on the flight back and was reminded of just how nice that noise cancellation is.

I probably could have resisted the temptation but that very weekend I was in the mall and passed by the Bose store. I saw that they had ear bud versions (Bose 20i), which are a lot smaller and more convenient. So I tried them. They outperform the QC15's in every way.They cancel more noise. They have better fidelity. They fit into a small pouch. They're even more comfortable, which is surprising for ear buds. And they had a special on factory refurbs for 20% off. (By the way, the refurbs have the full manufacturers warranty and they replace all the ear tips so the ick factor of reconditioned ear buds is greatly reduced for me.) So I broke down and bought a pair.

The noise canceling technology is, plain and simple, astonishing. Turning it on is an almost eerie experience. You don't realize how much background noise there is until it's suddenly removed (or more accurately, seriously attenuated). It makes my noisy CR-V sound like a Prius. Seriously. And one of the best upsides of dropping the noise floor so dramatically is that you can keep your program material at a modest volume and still hear extraordinary detail in highly dynamic recordings. It is amazing.

But it's not magic. It's far more effective on steady, low frequency droning sounds - like road noise, engine hum, air conditioner drone, and the like. It's less effective on higher frequency, dynamic sounds like voices and more percussive sounds. It still attenuates these sounds a lot, but not as dramatically. So human voices are kind of strange - sort of like a tinny whisper. In any case, once you have your program material playing, anything but the loudest and most percussive sounds are pushed so far into the background that your mind takes care of the rest and tunes them completely out. It's a wonderful experience.

I mentioned that these things are comfortable. That's the other amazing aspect to them. I'd learned to accept the discomfort of shoving in-ear buds into my ear canals. The 20i's don't insert into the canal; they sort of lay over it. It's not nearly as tight a seal, but with the active noise cancellation it doesn't need to be. The buds have a little hook that tucks into one of the main creases of your outer ear and that holds them in place very well. Also, the insert pieces that touch your ear are made out of a very soft, pliable, and silky smooth silicone. The fit and materials make these headphones the most comfortable 'phones I've ever had, including over-ear, on-ear, and in-ear varieties.

I should mention that there are some practical disadvantages with the noise canceling circuitry. First it requires power which means you have to charge an internal lithium ion battery roughly every 16 hours of use. Fortunately the headphones still work when the battery's dead, it just doesn't do the noise canceling trick. Charging is done via a mini-USB plug. Oddly, Bose includes the mini USB cable but not the AC adapter! You can charge off the USB port of your computer or, if you're like me and have several adapters lying around from cell phones and other devices, you can use one of them. But really, for $300 Bose damn well ought to include one! The biggest drawback however, is that the circuitry is housed in a thin box, like an over-sized stick of chewing gum, that is inline with the cabling. The box is on the plug end of the headphone cable and it imparts a general awkwardness to your music setup. I use a hair tie to secure the box to my mobile phone when I don't want it dangling around.

Okay, let me detour a bit before I talk about the sound. I've been a musician for over 40 years. I've been doing my own music recordings for almost 30. I have a recording studio and I've tracked, mixed, and mastered my own CDs. So I've learned quite a few things about audio; I understand the technical specs; and my ears are pretty well-trained. But I'm not an audiophile. There's so much snake oil, corksniffing, and emperor's new clothes pretension with audiophilia that I just can't identify with it. It's very fashionable in audiophile circles to rip on Bose. Some of it is deserved; some of it is not.

Here's my honest take: The 20i's sound very good. Not perfect, but very good. They have a full and solid-sounding low-end, but it's not that over-hyped, sub-woofer boom that all the cool kids like. It's more adult sounding. There's an upper-mid presence to the sound that adds clarity, but not an over abundance of sizzling highs. So for example, when listening to a ride cymbal, you hear a nice ping of the stick hitting the cymbal but with a more gentle wash of the high-end harmonics than you get with a lot of 'phones. With the noise canceling circuitry engaged, there seems to be some kind of EQ curve applied that is pleasant and widens the stereo image a bit. (I think this is the "Active EQ" feature that Bose advertises for these 'phones.) It's not a sound I'd call "flat and accurate", but for music enjoyment it's very agreeable and it does enhance the immersive experience by making you feel more enveloped by the sound in a surround sound kind of way (but way more subtle than that). If you require accuracy for critical listening these are not your headphones, but for those who just want an enjoyable sound, I think most people would be very, very pleased with them. Bottom line for me, I wouldn't mix a song with these, but they're terrific for enjoying the finished product. On a scale of 1 to 10, I'd rate them about an 8.

And finally, let's talk price. The retail on these is $300. Ouch. That's a buttload lot of dough! I paid $240 for refurbished ones, which is still very pricey. Clearly I think it's worth it. But I've been wanting a pair for a long time and I will genuinely get daily use out of them. I probably wouldn't bother if my commute were shorter and/or I didn't travel much. For more occasional use, I think a person could save a lot of money and get headphones that sound just as good or better. But for heavy commuters and travelers, they're totally the shiznit.
Labels: music technology