On The Road, Again 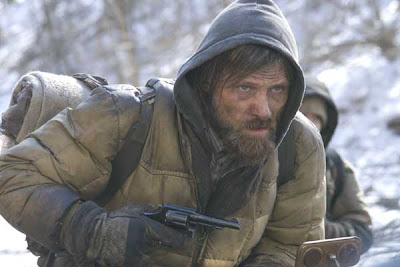 So in my last post, I talked about why the Man abandoned the bunker in the book, The Road.

Spoiler Alert! Don't read this or my last post if you haven't already read the book!

In a nutshell, my interpretation is that the Man, knowing he will soon die, leaves the well-stocked bunker so that he can find other good people to take care of his son.

If you buy that, then it brings up an interesting dilemma.

The Boy is highly concerned about good and evil and which side his father and he are on. He constantly questions the Man about the actions they have taken, or might take, in order to survive. He seeks reassurance that they are "the good guys". The Man doesn't see good and evil as a black and white choice, but as a continuous gradient. Shades of gray. He will bend his morals in order to survive, but there are limits to how far he will go.  He is above cannibalism, but refuses to risk their lives to help the feeder humans imprisoned in the basement pantry. He won't steal from other people (living ones anyway), but he'll punish those who steal from him with certain death.

In the context of the story, the Man is a good guy, but just barely. His love and compassion is remarkably deep, but reserved solely for his son. He's highly concerned with the Boy "keeping the fire", a metaphor for maintaining his goodness and innocence. But the Man's own fire is just about extinguished. I posit that the Man takes on morally questionable actions done in the name of survival, and shields the Boy from them, in some measure to preserve the Boy's fire at the cost of his own. The Man looks at the Boy in a messiah-like way (the book is peppered with these references), and he sacrifices himself to protect not only the Boy's life, but his core goodness as well.

But the will to survive has an unanticipated cost. The Man is unable to trust anyone. He is paltry in helping a pitiful old blind man they encounter on the road, and only provides the meager help he does to appease his son. If the Man were to encounter actual "good guys", who could look after his son after he dies, his fear and distrust of everyone would not allow them to get close to him and would blind the Man from recognizing or acknowledging their goodness. So the Man himself is a showstopper impediment to his own mission.  The mission only succeeds because the Man dies. It's an interesting irony in the story.

The movie drives this point home a little more directly by implying that the Veteran (the guy with the shotgun who offers to take the Boy in) had been tracking the Man and the Boy for awhile (and may have been responsible for the sounds that spooked the Man out of the bunker), but had not been able to connect with them because the Man eluded him so well. It is only after the Man dies, that the Veteran is able to find them. Hope requires faith, and salvation is only possible when there is enough trust to reveal it.
Labels: lagniappe