The Road, the Bunker, and the Meaning of It All 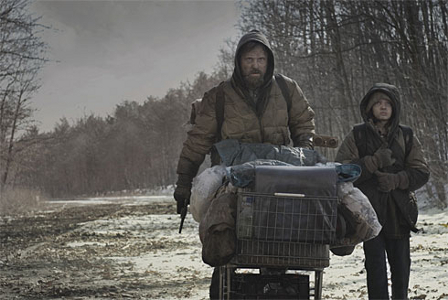 I recently finished reading The Road. I've been on a Cormac McCarthy kick the last few months. What a remarkable book! Absolutely unrelenting in its bleakness, and yet at the same time, an incredibly moving testament of a man's love for his child.

Before I go on, I should say right here:  Spoiler Alert! If you haven't read The Road  and you have even a passing interest in doing so, don't read any further. You've been warned!

Okay, so you're still with me.

One plot point that really lodged itself in my brain was when the Man - out of food, on the run from cannibals, and near death - finds the bunker. Or rather when he leaves the bunker. It was such a game changing, no, life saving, find. It could have sustained the Man and the Boy for a long time. Why in the world would he leave it? I thought about that question a lot while reading the rest of the book and formed many thoughts, which I've written down here. [This discussion only applies to the book! The movie adaptation adds a scene at the bunker where the Man gets spooked when he hears something outside and is afraid they are going to be discovered. The movie uses this as the pivotal event that motivates the Man to leave the bunker. No such thing happens in the book. To me, there are a few problems with this added scene which weaken the story, but I won't delve into that here...]

In the book's narrative, the Man's reasoning for leaving the bunker is that it's too dangerous to stay. He acts like this is a given. The bunker is too exposed and easy to discover. They could have cannibals searching for them. And with all the bunker's provisions, they are an easy and extremely attractive target.

It's hard to take this explanation at face value because it doesn't make much sense. First, the story has already proven that the bunker isn't too exposed. After all, it's been hidden since the apocalyptic event which I reckon to be about ten years previous based on my estimation of the Boy's age. It remained undiscovered despite all survivors being in constant search for these kinds of caches. It would be relatively easy to cover the trap door close to as well as it was covered for those ten years. And given how resourceful the Man is, with some thought and effort he might have been able to conceal it better while also improving its accessibility for himself and his son.

I've read some folks on the Internet say that the cannibals would sniff them out in the bunker using dogs. I'm pretty sure this reasoning comes from seeing the movie, not reading the book. In the book, dogs are only mentioned once in passing and in a context that has nothing to do with the cannibals. It's implied that the dogs are feral, not domesticated. If you think about it, it's unlikely that anyone, including the cannibals, would have dogs since dogs are yet more mouths to feed and are themselves too easy of a food source for desperate starving people. The dogs certainly wouldn't have lasted past the first time the cannibal owners got really hungry, which is an almost constant condition in this post-apocalyptic world.

Second, basic wilderness survival (yeah, I was a Boy Scout) teaches that the most important priorities are water, shelter, and food. The bunker provided all three in abundance, plus clothing, equipment, and tools. It would have been totally worth any risk of discovery to take the time and effort to figure out how to hide, secure, and defend the bunker.

Third, and most importantly, it's an illusion that the road is safer than the bunker. The Man has no idea where the bad guys are, what lies in wait on the road, and whether he'll be able to find food and shelter when he leaves the bunker. Every day on the road is a deadly crap shoot. For all he knows, he could turn a corner and walk right into a village of cannibals. If you're trying to avoid being caught, instead of going out into the open of the road, it makes more sense to hunker down in a good hiding place (like, say, a bunker!) and wait for the danger to pass (even if temporarily). This is pointed out explicitly in the ending when the man with the shotgun offers to take in the Boy after the Man dies:

You can stay here with your papa and die or you can go with me. If you stay you need to keep out of the road. I don't know how you made it this far.

Given how meticulously crafted McCarthy's books are, I can't believe that he didn't think of all of this. I also can't believe that the shotgun man's conflicting assessment of the road's safety was an accident. McCarthy's not sloppy and everything seems to be written with a literary purpose. My thinking is that the Man's stated rationale for leaving the bunker isn't the true reason and that we readers are supposed to work out the reason from context.

Okay, so why then does he leave the bunker? Here's my theory...

The Man's sole reason for carrying on and not following his wife into suicide is his son. It's mentioned several times in the book and one of the main themes of the book is his love and devotion to the Boy.

He knew only that the child was his warrant. He said: If he is not the word of God God never spoke.

The book also establishes that the Man is aware that he is dying. He has a chronic, blood-tinged, and ever-worsening cough and his strength and stamina is in steady decline. From the description it sounds like tuberculosis, but more probably it's lung cancer or something similar caused by the inhalation of whatever foulness is in the air. Anyway, my theory is that the Man can't stay in the bunker because he knows he's dying and his son is clearly not ready to fend for himself even in the bunker and especially when the bunker's supplies finally run out, which they will eventually. So the Man's best bet to ensure his son's long-term survival - which is his only reason for living - is to find a better situation where somebody trustworthy can look after his son and continue to teach him what he needs to know to survive and to "carry the fire". Perhaps a community of "good guys" (as the book calls decent people), if such a thing exists. He knows he cannot find that situation staying in the bunker and with his worsening health he has limited time to do it.

I like this theory because it fits the available facts of the story, seems logical, and works well with the literary devices in the novel. The road becomes a symbol for the suffering born of perseverance in the pursuit of hope. The road is unforgiving and unknowable, but it must be endured because to not do so is to give up all hope and resign the Boy to certain doom. And similarly then, the bunker represents the temptation to end the suffering by abandoning hope. A sort of suicide of the spirit. Like suicide, the bunker is tempting because of its immediate comfort. But also like suicide, staying in the bunker is abandoning hope because the Man knows that doing so would doom his son when the bunker's supplies run out and the Boy is utterly unprepared to deal with it on his own. In fact, the easy abundance of the bunker would leave the Boy even less prepared to deal with the harsh reality outside it.