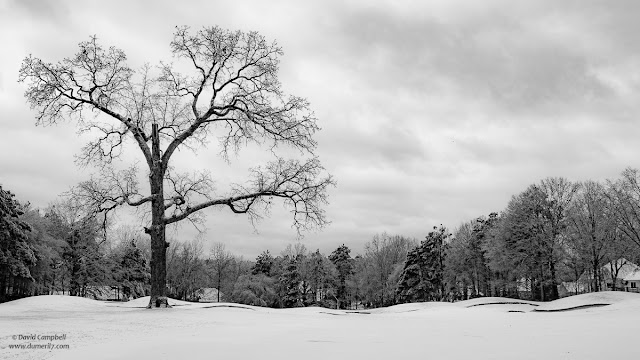 Winter Storm Jonas hit the east coast yesterday. The worst of it was north of North Carolina, but we did get a fair amount of freezing rain, sleet, and a tiny bit of snow. It was enough to lay down a thin layer of ice over everything. The ice was weighing heavily on the trees in our yard and then the wind came in. One of our tall pines was swaying a good 15 feet from erect and I was worried it would come down last night. But so far it's held. It could still happen though since the trees are still very weighed down with ice. We also lost electricity for a half hour or so but it was restored and it's held steady since. Knock on wood.

This morning I bundled up and walked over to the neighborhood golf course to shoot some pictures. It was beautiful with all the frozen trees. There were a ton of kids on the course sledding and I shot photos of them as well, which I'll post in the future. Tomorrow, if the trees are still frozen, I may brave the roads and drive out a nearby lake to see what I can shoot there.
Labels: photography