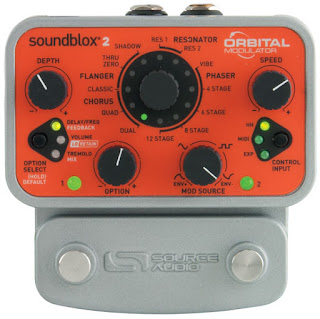 I've owned the Source Audio Orbital Modulator for over a year now and during that time I've played a lot with it, jamming at home, rehearsing with my band, and playing at gigs. Here are my collected thoughts:

I have as many minuses as pluses, but really the complaints that I have are somewhat minor, except for perhaps the first. But on balance, I feel like the Orbital Modulator is one of the best multi-function modulation pedals currently on the market, and at $170 street, it's really a no-brainer.
Labels: music tone musings