Who's Afraid of Virginia's Woof? 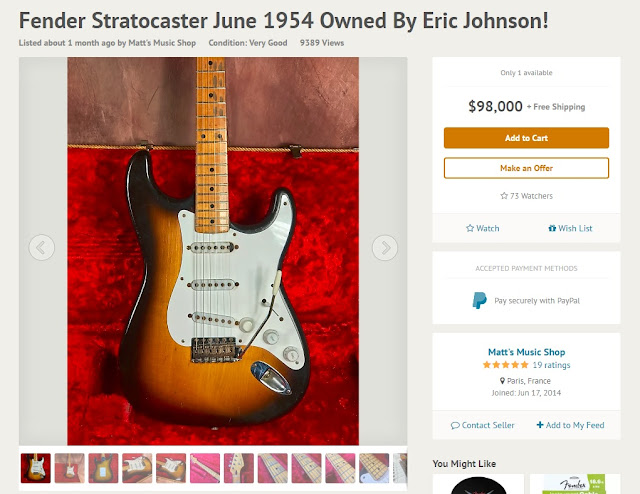 A link to this reverb.com ad came up in my Facebook feed this morning. It's a lovely vintage guitar. But more importantly it looks like it might be Eric Johnson's famous Virginia Strat. However, it's not perfectly clear from the ad.

A bit of history: "Virginia" was the name of a woman who worked at the Fender factory in the '50s and assembled many of the early Stratocasters. It was common at that time for the workers to sign the body cavity of guitars they built, which is undoubtedly how EJ's guitar got its name.

As I said, I don't know if the reverb.com guitar is the actual Virginia Strat or not. Maybe it is in fact the guitar that EJ used to record much of Ah Via Musicom and a lot of other records. Or maybe this guitar was simply another one signed by Virginia The Factory Worker that came into Johnson's possession. He has probably owned hundreds of vintage guitars after all. It doesn't seem improbable to me that he has owned more than one signed by Virginia The Factory Worker.

The actual Virginia Strat is in fact a '54 with DiMarzio HS-2 pickups wired for single-coil operation. Here's a snippet from Gear Secrets of the Guitar Legends where EJ talks about that guitar:

"My main guitar is a 1954 Fender Stratocaster that I call 'Virginia,' and it's loaded with DiMarzio HS-2 stacked humbuckers. The HS-2 is a real sweet-sounding pickup, and I like using them better as single-coils. I disconnect the humbucking part of the pickup and just use it as a single-coil, but the mere fact that you have that extra coil in the proximity of the other cancels about 30% or 40% of the hum that you'd get from a stock Strat pickup.  It has a little more gain and it's a little tighter on the bottom end that the stock Strat pickups. In the bridge position, it gives my Strat a thicker, 'violiny' tone. After I heard that sound, it spurred me to try different types of leads that used a little bit more of that kind of sound."


Curious about Virginia and her violiny tone? Here's a youtube link of EJ playing the quintessential Virginia song on the actual Virginia guitar. To be fair, EJ can make any guitar sound violiny. That's just what he does. But this would be the guitar that introduced the world to that iconic sound.

If it's really Virginia, she would be a true Holy Grail guitar for a lot of people. Myself included! Virginia has a special place in the hearts of hardcore EJ fans. In fact, I would say that of all the Strats that EJ has played, Virginia is the most revered.

But regardless of the reverb.com guitar's provenance, at $98K I'd need a few more couches to scrape together enough coin to buy her!
Labels: lagniappe music tone musings