In Praise of Hand Wiring 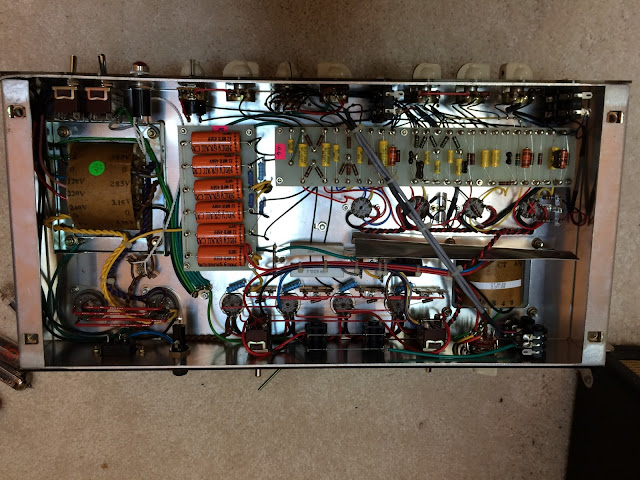 At my band's last rehearsal, my Ceriatone DC30 had a strange volume fading problem. My first response to those kinds of things is to replace the power tubes. In fact, that's a very useful pro tip born of 35 years of playing: If you have a tube amp with some kind of weird problem, the first thing to try is replacing the power tubes. At least half of the time, that's the culprit. But in this case, it didn't resolve the issue. In trying to diagnose the cause, I discovered that if I flipped the standby switch on and off a few times, that would temporarily fix the problem. I speculated that perhaps the switch was going bad. I limped along in practice by flipping the switch whenever the fade issue occurred. But when I got home, I went to Mojotone, ordered a new switch and this weekend I finally got around to installing it.

I think that fixed the problem. At least it didn't reoccur for the hour or so I pummeled the amp afterwards. I'll know better at the next practice or gig. If it doesn't fix the issue, then I'll try replacing the rectifier tube. And if that doesn't work, then I'm out of ideas and I'll take it to a professional. [Update: Replacing the switch fixed it!]

Anyway, I hadn't opened up my DC30 since installing the chassis into the cabinet when I got the amp ten years ago. (At that time, Ceriatone just sold the chassis and you had to buy a cabinet and speakers from a different vendor and put it all together yourself.) Ten years of service before developing a problem is pretty darn good in my book. I wish everything I owned was that reliable!

When I pulled the chassis, I was reminded of what lovely hand-wiring work Ceriatone does. It really is a thing of beauty.

Although I own amps built on printed circuit boards, and will probably buy more in the future, I'm a believer in so-called "point-to-point" construction (either true point-to-point, or on turret boards and terminal strips). But not because hand-wiring itself makes an amp sound better. I don't believe it does. I've read arguments that capacitance introduced by PC boards affects tone. But I think that any such stray capacitance isn't affecting it enough to make an appreciable difference. To my ears anyway. There's no doubt that PC board construction is a lot easier and cheaper to manufacture (keeping consumers prices low). And wave soldering PCBs can achieve better consistency as well.


But there are a few real advantages of hand-wired amps.

First, hand-wired amps tend to have better quality components. And that definitely makes an appreciable difference in tone. It's not always the case, but by and large people who take the time and effort to hand-make something tend to use top-shelf materials. It's part of the hand-crafted aesthetic. Of course, you can put good quality components on a PC board too, but it often doesn't work out that way because manufacturers are building to a designated price point.

Second, hand-wired amps are usually a lot easier to service. Because a person, rather than a machine, is having to put it together, the parts are more widely spaced and the wiring runs tend to be easier to follow. (At least with amps that are wired by somebody who knows what he/she is doing.) On a PCB amp, the traces can run on top of, underneath, and even embedded within, the board. It can be difficult or impossible to reverse engineer when troubleshooting. A wiring layout that is easier to put together by hand is also easier to work on later. For example, in replacing the standby switch, I ordered a new switch and it didn't matter much what brand or size. The only thing that mattered was that it was a metal toggle, on/on DPDT switch of sufficient voltage. I fastened the switch to the chassis and soldered each wire one-by-one, removing a wire from the old switch and soldering it onto the new one in the same location. The wires were large and easy for my big hands to work with. It was all very straight-forward. If it were a PCB amp, the switch would likely be tiny and difficult to work with. I'd have to find a switch that was either exactly the same make and model, or had exactly the same physical dimensions and pin layout. There are electronics parts catalogs with thousands of such switches to chose from so just finding the right part can be a huge research problem. Soldering the new switch onto the PCB would be trickier because of the tiny size, and I'd have to be careful not to burn out the PCB traces because often they're really thin and delicate. I might have to pull the entire board out of the chassis to have enough room to solder it, and removing the board may first require removing other boards! It can all be done, but it's way more hassle. The bottom line is that most mass-produced PCBs are built to make manufacturing cheap, at the expense of servicing. That's why so many electronic things are basically disposable – it's cheaper to replace than repair.

Third, hand-wired amps tend to sound better because the circuits are simpler (due to hand-wiring requiring so much time and effort). Every electronic component in the signal path affects the sound, and many non-signal path components do as well. The more things you put in the circuit, the more things are leaving their little fingerprints on the tone. And the cumulative effect is usually a less lively and more neutered-sounding amp. On really complicated amps with lots of bells and whistles, designers have to add yet more stuff to the circuit in order to compensate for tonal problems introduced by all the features. Having played a lot of vintage and boutique amps, as well as modern feature-laden amps, I've come to realize that, generally, the simpler an amp is, the better it sounds. Once again, there's nothing stopping a PCB amp from using a simple circuit, but it usually doesn't work out that way. PCB amps are relatively easy to add features to and manufacturers are motivated to do so to differentiate their products from competitors. Now, I'll also say that I've played complicated PCB amps that sound great. And I've seen some ungodly complicated hand-wired amps. But both of those cases are exceptions in my opinion. I stand by the assertion that hand-wired amps are generally simpler, and simpler generally sounds better.

Fourth, hand-wired amps tend to be more rugged. If you want proof, look at all the old Fenders and Marshalls still in service today. I seriously doubt that we'll see nearly as many current production Fenders in service 40+ years from now. Hand-wiring is not, in and of itself, inherently more rugged. But once again it's a function of the hand-crafted aesthetic:  The type of company puts that much effort into something is also more likely to be the type of company that builds its products to last. They tend to do things like mount jacks, switches, knobs, and sockets to the chassis (instead of just the circuit board). Or use a heavy-duty chassis, instead of a folded sheet of thin metal. PCB amps can be made to be very rugged too. For example, Rivera and Soldano make pretty bomb-proof PCB amps! But the big mass manufacturers are usually building to a price point and aren't nearly as robust.

And finally, there's just the art of hand-wiring that I appreciate. It's very much like the inside of a fine, Swiss watch. All the fastidiously routed and tied-off wires; the electronic components neatly lined up on the turret board; the meticulously-twisted pairs of heater wires traversing from tube to tube; the perfectly shiny and uniform blobs of solder at each terminal. I look at all of that, knowing that each of those things was done by hand, by somebody who cares about quality. Occasionally I get that same impression from a PCB amp, but it's rare.
Labels: music tone musings