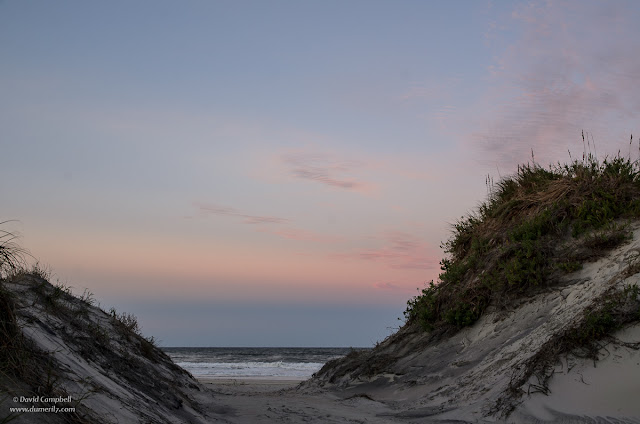 There was one location in particular at our campgrounds on the Outer Banks that was an obvious photo location. And I am totally not above taking the obvious shot. Yeah, I crave unique photos too just like anybody who shoots with some sense of purpose. But when the Photo Gods throw you a bone and present you with a gift, just say "Thanks," and take the damn shot.

This location was at the end of a short trail leading from the camp sites, through the dunes, to the beach. For people camping at the site, it would mostly likely be their first glimpse of the Atlantic as they strolled to the beach. My wife and I both shot this location many times during the 3 day weekend, trying to get the definitive shot.

Since it features the Atlantic ocean from a beach in NC, this shot is obviously facing east. So you would expect, judging from the colors in the sky, that this is a sunrise photo. But it's actually a sunset photo. I was at our campsite trying to read despite the cacophony of Boy Scouts being boys (and not in the Kavanaugh sense), and noticed the sunset colors developing nicely in the west. I happened to look back towards the dunes and noticed that the sunset was coloring the eastern sky too. Sometimes that happens. So I tossed the book I was reading, grabbed my camera, and ran down the trail to the Obvious Photo Location.

And that's how I ended up with my best photo of it. I probably could have gotten a better one by shagging my lazy butt up for a sunrise. But I have to admit that with the crummy sleep I was getting in a tent on the ground, I never mustered the motivation to do it.

For that, the Photo Gods undoubtedly punished me.
Labels: Nikon D7000 photography