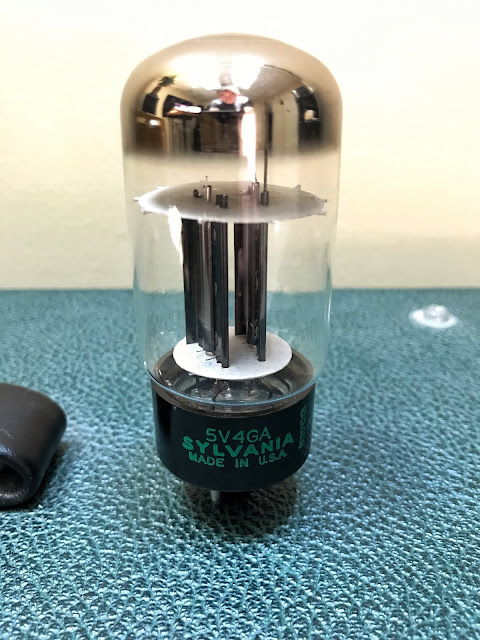 One of the private guitar forums that I frequent had a discussion about rectifier tubes in Vox-style amps. One of the members had been experimenting with swapping his Top Hat Club Royale’s 5AR4 rectifier tube for a 5Y3, and it resulted in more pronounced differences than he was expecting. He also posted some videos demonstrating it. (Guitarists and audiophiles will geek out over this stuff!) It was an interesting discussion and videos and it got me thinking about this stuff, because I pretty much only think about tubes when I need to replace some.

I had read many years ago in one of Gerald Weber’s books that while rectifier tubes aren’t in the signal path of a guitar amp, they do affect the sound of an amp by controlling the DC voltage supplied to the other tubes and the speed at which that voltage is supplied. And that has an effect on the way the tubes that are in the signal path sound and in particular, their dynamic response over time to notes. Changing rectifier tubes results in a subtle tone differences, but much less subtle feel differences. In other words, with one type of rectifier tube, individual notes might have a very fast and percussive initial attack while with another tube, notes might have a slower attack, sort of blossoming with each note.

A long time ago, another friend of mine had also done some rectifier tube experimentation with his Matchless DC30, substituting the stock 5AR4 rectifier tube for a pair of 5V4s (the amp actually comes with an additional rectifier tube socket to make this 2-for-1 substitution possible). He encouraged me to do so as well, but I never got around to it because I liked the way my amp sounded and had other things to spend my money on.

But all this discussion piqued my interest in it, so I ordered a pair of 5V4s from KCA Tubes for my DC30 clone.

Now, there are no longer any manufacturers of 5V4 tubes and there haven't been for many years. So the only option for 5V4s is to buy "new old stock" (NOS) tubes. NOS is a designation for products that are old but in unused condition. NOS products are usually sourced from leftover inventories of manufacturers, distributors, retailers, repair shops, military surplus, or other businesses that hold large inventories of products. When it comes to vacuum tubes NOS tubes are almost always more reliable, longer lasting, and better sounding than brand new tubes from current manufacturers. New manufacture tubes are made cheaply in overseas factories in current and former communist countries where there is still demand, and they are simply not as well made although they have improved tremendously over the last couple of decades. NOS tubes are also a lot more expensive due to the better performance, but also because there is a finite supply of them.

I have a few special NOS tubes I’ve collected over the years but in general, if there exists a good, reliable, newly-manufactured version of a tube, I’ll buy the new tube.  I do this because tubes are consumable – the act of using them depletes them. Other than food, I generally avoid spending a lot of money on consumables unless there’s a very compelling reason. And obviously in the case of 5V4s, there is. So I bought a pair of NOS Sylvanias which were pricey, but not outrageous like some NOS tubes.

They arrived today. I haven’t had a chance to test them out yet, but I wanted to write this blog post simply because the boxes they came in were cool little time capsules from another era. One that I only caught the tail-end of. 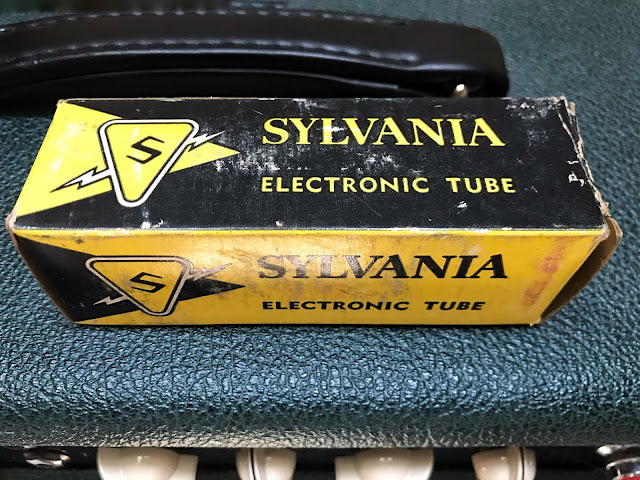 I bought two tubes and each came in a different box. One tube was packaged in a black and yellow, retro-cool Sylvania-branded box which looks straight out of the ‘60s.

But even more interesting to me was the plain box that the other tube was packaged in. Or rather, the writing on it was really interesting. 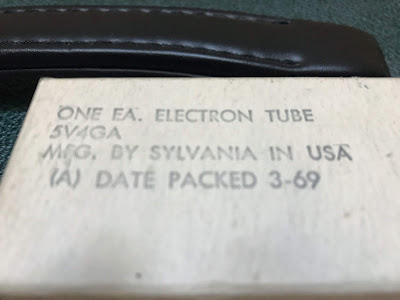 As you can see, the box was packed in March 1969 making it almost as old as I am. There’s no guarantee that the tube I bought is the one originally packaged in the box. But it’s very possible since it is as-described on the box – a NOS Sylvania 5V4GA.

Another interesting thing is that this tube evidently sold for $0.68 when new. Wow! Let’s just say I paid a fair amount more than that 51 years later. 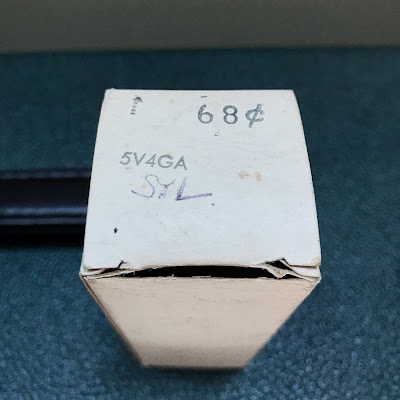 Electronically speaking (i.e. ignoring subjective opinions about audio quality), tubes of the same type are fungible. And as I understand it, in the later years of the golden age of tubes, manufacturers often bought tubes from other manufacturers and slapped their own label on them in order to meet supply chain demands. So although Sylvania did manufacture vacuum tubes, it’s possible that one or both of the tubes I purchased may have been manufactured by some other company.

To my untrained eye, the tubes I bought are identical except for two things: The screen-printed labeling on the base of the tubes, and the size of the getter. The getter is the silver coating on the inside of the glass dome of a tube. It absorbs residual gases from the components inside in order to preserve the tube's vacuum. The getters won’t be exactly the same from tube to tube due to the process used to create them, but I think the difference between the getters in my tubes are significant enough to not be the result of unit variance. So between the differences in the getters and the labels, I think it’s clear that at the very least my tubes were from different production runs, and potentially from different manufacturers.

All of this tube nostalgia also brings back another memory I hadn’t thought about for many, many years. I recall from my childhood (this would have been the early ‘70s) that there was a drug store in my home town that used to have a tube testing station. My recollection is that it looked very much like the one in the photo below that I found on Google. It had a bunch of different sockets to accommodate all the different types of tubes and a simple good/bad meter. It also had drawers full of replacement tubes in the stand supporting the tester. If your TV acted up, you’d pull all the tubes out of the TV, take them to the store, and test each of them one-by-one. Then you’d buy replacements for whichever ones tested bad (at prices that would make modern tube audio dorks salivate). 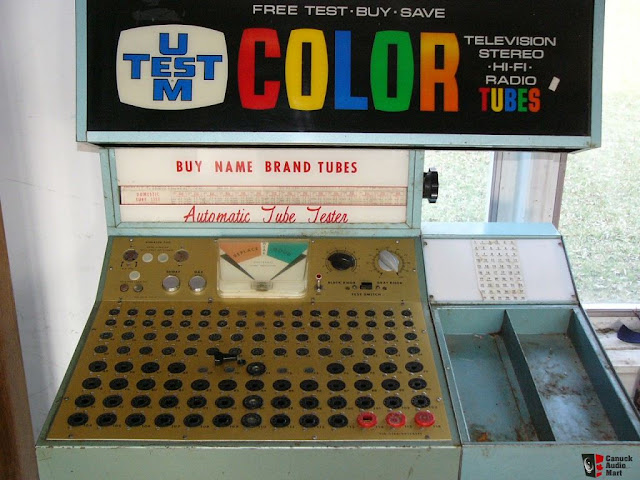 It’s a shame you can’t still do that!

Sometime in the near future, I'll post my own impressions of the tube swap.
Labels: music technology tone musings