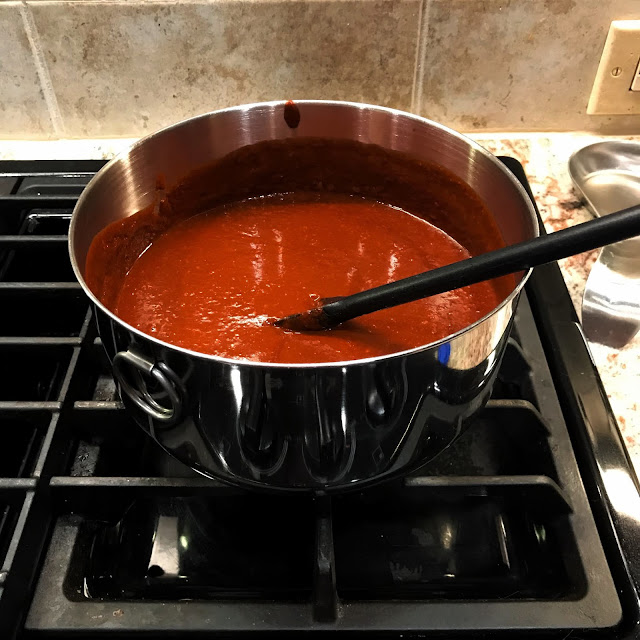 Anyone who knows me can attest that I am a New Mexican chile fanatic. It's nowhere near the hottest pepper*, but it is the tastiest in my not-so-humble opinion. And my answer to the character-illuminating question of, "Red or green?", has been emphatically "Green!" for a very long time.

But a week ago, I was pondering what to do with some of the brisket I'd just spent 12 hours smoking. We have some staples in our home for leftover smoked brisket – sandwiches, breakfast tacos, and my oldest son's greatest culinary contribution to our house, brisket potato soup (it's quite amazing). But I wanted to do something different and I thought smoked brisket enchiladas would be perfect.

Normally anything enchilada will have NM green chile sauce in my home. But I just felt that smoked brisket would work better with a red chile sauce. And not the poor imitation stuff you buy in cans from the grocery store, but made-from-scratch sauce using dried New Mexican red chiles. That style of sauce is a staple in my home state of New Mexico. The difference is truly night and day. Thinking about it, I got excited because I haven't had good New Mexican style red chile enchiladas in about 30 years! You can't get it in North Carolina (to my admittedly limited knowledge) where I live now, and it was almost impossible to find in central and coastal Texas where I lived for over 20 years before moving to NC. Trust me, the red sauce you get at typical Mexican restaurants outside New Mexico is very, very different from what I'm talking about.

I'd actually never made the sauce before, but I had a large bag of dried red chiles from my last visit to NM that I knew would be the most elusive ingredient here on the East Coast. I found several recipes online and chose the one that sounded the most authentic, with the sort of basic ingredients that a New Mexican would probably use.

Cutting to the chase, it came out fabulously. My family, who had never had this kind of sauce before, loved the enchiladas. There's a wonderful, warm, earthy flavor to NM red chile sauce and I'd forgotten just how good it is. And my hunch was right – it went perfectly with smoked brisket. My family and I are now big fans and we have another great option for the brisket when I do a smoke.

Over the next week, we used the leftover sauce to make Carne Adovada, and then Migas. Both of those turned out wonderfully too. We got a lot of mileage out of that sauce!

So, am I still a green guy? Yeah, I am. But I'm glad I rediscovered the red! It's a great change of pace and it simply goes better with certain kinds of food.

* Ironically, that would be a pepper originating just a few hours from where I live in Raleigh, NC. The Carolina Reaper is officially the hottest pepper and the guy who invented it apparently has even hotter cultivar peppers that just haven't been officially measured yet. Who would have guessed that the hottest pepper in the world come from Fort Mill, SC? Not me.