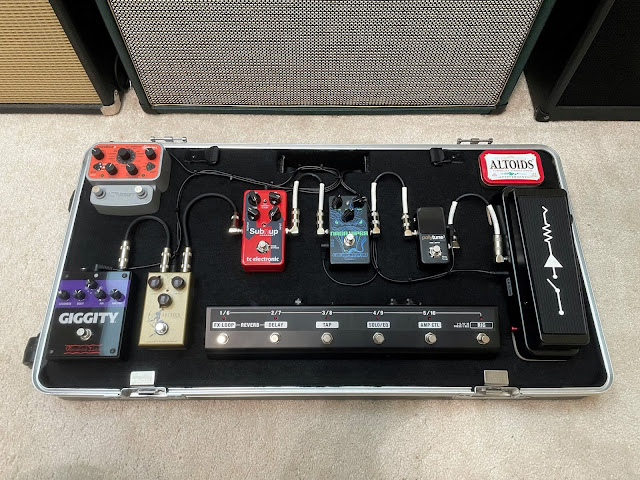 Awhile back, I'd put together what was my ideal pedalboard. It used some sneaky wiring schemes to create three separate signal paths that could be switched between with a single button press. Short of an expensive programmable loop switcher, it remains the best way I've found to use a clean platform amp, and get the core sounds I want with minimal dancing around on the pedalboard.

But the Tube Amp Expander is a game changer.

The truth is, I've never liked the "clean platform with pedals" approach. I did it because it was the only way to get overdrive sounds at a reasonable volume with the non-master volume amps that I like. But for me, it's always been a sad compromise. I bought these expensive, cantankerous tube amps for the way they sound, especially when cranked into overdrive. But I had to neuter them by running them clean and using pedals to get my overdrive sound and it never sounded as good as the amp turned up loud in my opinion. It was like owning a Ferrari and not being able to take it out of first gear.

With the TAE, I can turn up my amps and get that cranked amp sound, but at any volume level. Even better, I can play the way I really want to play: Turn the amp up until the power tubes get involved in creating a killer crunch sound, and then use the guitar volume, my picking attack, and a boost pedal to get cleaner and dirtier variations. That's a much simpler, more direct, more expressive, and better sounding way than using dirt pedals in my opinion. And it removes the need to emulate channel switching with a bunch of pedals and clever wiring tricks like my old pedalboard did.

This has enabled me to greatly simplify my pedalboard. No more loop switchers and multiple signal paths. I have a single signal path with fewer pedals and patch cords. The TAE also provides delay and reverb, so I could get rid of those pedals too. Less stuff to go wrong.

In addition to jettisoning a bunch of pedals, I also moved my power supply to underneath the pedalboard, freeing up yet more real estate on top. Now my pedalboard is bordering on minimalist, which I love.

At the same time as downsizing, I also upgraded and added a few pedals (not too many, lest I re-complicate things...). First is a J Rockett Archer Ikon, which is one of the many Klon Centaur clones out there and I really like it. I use it as a mostly-clean boost, but it's also a terrific low-to-medium gain overdrive with a more restrained and natural sounding mid bump than a Tube Screamer.

Another new pedal is a Catalinbread Naga Viper. The Viper is a silicon transistor treble booster with a nicely expanded control set. This is the first treble booster I've owned and it's made me regret taking so long to get one. It turns just about any tube amp into a feral beast that still cleans up wonderfully when you roll back your guitar volume. Sometimes I toy with the idea of going full-on Rory and using just a guitar, amp, and treble booster. But I can't resist a little bit of complication in my life.

I'm still using my Voodoo Lab Giggity, which seems like the world's best kept guitar secret. I usually keep it dialed in for a "fat boost" – a mostly-clean boost with an EQ curve that rounds off the top end and adds a bit of low-mids. I like to use it for solos where I want a more warm, singing tone. With the Ikon, Viper, and Giggity, that makes three different boosts available on my board that all sound a bit different. And I sometimes combine them in different pairings too.

Also new is a TC Electronic SubNUp, which is a polyphonic octaver. I have two main purposes for it: First, I use it to create faux electric 12-string sounds, ala the Byrds, Tom Petty, and the Beatles. Second, I combine it with the Naga Viper to simulate Hendrix style octave-fuzz. The SubNUp fakes both of those sounds pretty well. Not 100% of course, but close enough that non-guitarists would never know. The SubNUp is also a ton of fun for doing organ, synth, and fat octave-down sounds ala Tom Morello, but I don't use those sounds as much.

Finally, I retired my old Boss TU-12 tuner and bought a TC Electronic Polytune 3 Noir. Back in the '80s and '90s, the TU-12 was the tuner to have and mine served me faithfully for over 30 years. But the Polytune is superior in every way. It's a lot more accurate, more rugged, and it doesn't degrade my tone when bypassed. Best of all, its polyphonic mode allows me to find an out-of-tune string very quickly then seamlessly switch to super-accurate strobe tuning mode to fix it. It's the perfect stage tuner in my opinion. Also, strobe mode is great for adjusting intonation because of the increased accuracy.

I've been playing with this setup for a few months now and every time I plug in, I'm tickled with how good it sounds, how versatile it is, and how controllable my overall volume is – without sacrificing my tone! Now, I don't have any illusions that this pedalboard configuration will last forever. I'm far too fickle for that. But I can say that this is the best I've ever sounded.