A Big Step Forward on the Pedalboard 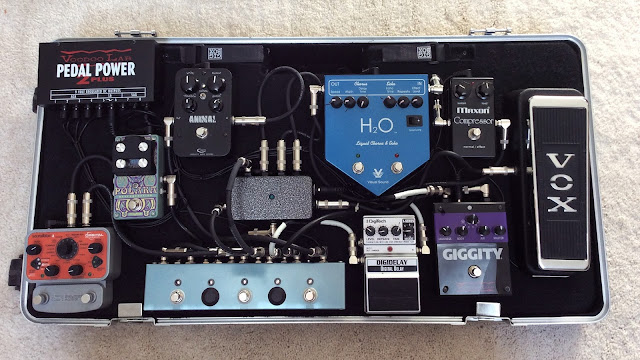 I mentioned in an earlier post that I'd rewired my pedalboard to what I think is the ideal setup. It's ideal not because I have a ton of pedals giving me every possible sound, but because it greatly simplifies switching between the handful of sounds that I use most.

In general, I need 3 core sounds – clean, crunch, and lead. Very simple. But in an ideal world, each of those sounds has a very different effect treatment. For example, for my clean tone I usually like some compression, a low-level slap-back delay, and a splash of reverb. But for a crunchy rhythm, I just want an overdrive pedal and the reverb. And for my lead, I want to boost my crunch sound so it's louder and more saturation, and I like to add a medium-length delay to the reverb.

The approach is somewhat inspired by Eric Johnson's rig. EJ has 3 entirely independent signal chains, each terminating in a different amp (or rather, amps since his clean sound uses a pair of Fender Twin Reverbs in stereo). He switches between them using two A/B switch boxes. But there are several key differences in what I do. First, Eric has a roadie and I do not. There's no way I'm schlepping around 3 or 4 amps! So my rig uses a single amp. There are also some pedals, like wah and reverb, that I want to be able use with any of the core sounds.

I had tried this before using a homemade loop bypass strip box with 5 loops that I made several years ago from parts ordered from Pedal Parts Plus. But I abandoned the approach after a year or so due to a couple of issues. First, the footswitches on my loop box were too close together for my big feet! I was always stepping on two of them when I meant to hit one. Second, switching between any of my core sounds always required hitting two buttons - one to turn off the current sound, and one to turn on the new one. Combine that with my tendency to stomp on two buttons instead of one, and tone changes were really error-prone.

So I ended up going with a simplified pedalboard and just not using a lot of pedals that I have would preferred. This is the configuration I wrote about way back in 2015.

With my new setup, I can switch between my 3 core sounds with a single button press, maybe two depending on exactly which sounds I'm switching between.

The lead photo doesn't really show how the system works, so I put together this diagram which rearranges the pedal layout to make the signal routing clearer: 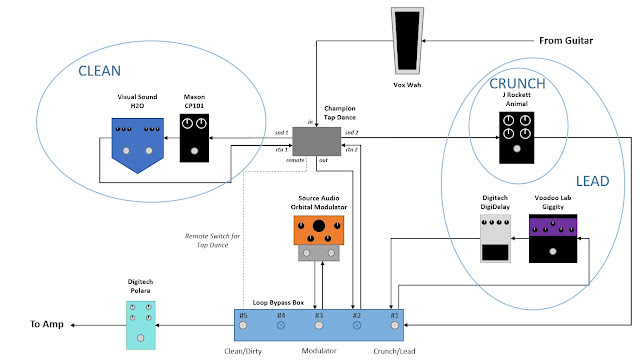 There is a signal chain for each core sound:
And on top of these core sounds, I can individually activate a Vox wah and a Source Audio Orbital modulator that I use for the occasional phaser/flanger/rotary/tremolo sound. The Polara is always on, adding reverb to everything.

There are two routing boxes that are the lynchpins to the system: A Champion Tap Dance loop selector, and my loop bypass box, which I've resurrected and modified.

The Tap Dance toggles between the clean signal chain and one of the dirty signal chains (either crunch or lead).

The loop bypass box is much changed. First, I unbolted the footswitches for loops #2 and #4 (when counting right-to-left, in the direction of signal flow) and pushed them into the chassis box so they're hidden inside, inert. Then I plugged the holes in the chassis. Before plugging the holes I ensured that loop #2 was activated, making loop #2 an always-on loop. You'll see why I did this in a bit. Loop #4 is always off – it has been essentially mothballed. Both loop footswitches could be restored very quickly if I ever needed to, but this simple mod gives the remaining footswitches a lot more breathing room to prevent inadvertently stomping on the wrong switch.

I also rewired the left-most switch on the loop bypass box (#5) to convert it into a simple latching switch to control the Tap Dance. Pressing on that left-most footswitch causes the Tap Dance to toggle between the clean and dirty chains.

The tricky bit is that I wired the loop box and the Tap Dance together in a very non-standard way. At a high level, I wired it so that loop #1 on the loop box is part of the dirty loop on the Tap Dance, so that the Giggity and DigiDelay can be added to the crunch sound (changing it into the lead sound).

I also fed the master output of the Tap Dance back into the loop box using the return jack on loop #2 (the always-on loop). This allows the modulation loop to be used with any of the 3 core sounds.

It was a little complicated to figure out how to wire it, but using it is extremely simple:
At any given time, my clean sound is one button press away. Crunch and lead are at most two button presses away. Usually only one because I switch between crunch and lead more than any other combination. In addition, if I'm playing the clean sound I can often "preload" my crunch or lead sound by hitting the button in advance of actually needing to switch. Then when the time comes to do the switch I only have one button to press.

It all works really well. The only downside is that the routing is odd and I'm likely to forget exactly how it works a year from now (which is one reason for documenting it here). I imagine it could be difficult to troubleshoot if I have problems at a gig. So I actually printed out the diagram and keep it in my gig box just in case! But the only way I can think of to make this simpler to use - and still get similar functionality - would be to use a programmable loop switcher, and that costs a lot of money. I could also buy some solderless cable kits for both audio and power and tidy up all the cabling. But once again that's pricey, and I'm never very confident that a pedalboard configuration will last long enough to make that pay off. For now I'll stick with what I have because it's working really well and didn't cost me any additional money to do!

Labels: music tone musings what i know of