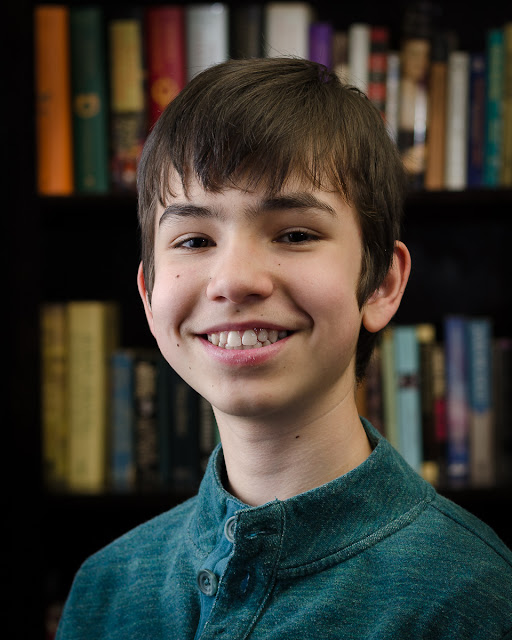 Well, my oldest kid turned 13. The time is just whizzing by. Doesn't seem very long ago at all that we were bringing him back from the hospital as a newborn. I'm proud of the boy he's been. And I'm looking forward to seeing the man he'll become.

To mark the occasion, I decided to take his portrait. At this age you can't get too many really. The photo session gave me the opportunity to try out my spiffy new Ladda NiMH batteries in my speedlights and triggers. They worked great! Took over 100 shots including all the test photos getting the lighting right and the Laddas were still recycling my speedlights in one second or less. Didn't come close to depleting them.

I forgot to take a BTS photo, but the session went down like this: We set up in our library. Ambient light wasn't a contributing factor in these because the library is rather dark. The key light was set up camera-left. It's coming in directly from the side and just slightly above - maybe a 15 degree angle up from my son's head. It was shot through a 48" octobox. The octobox was aimed in front of the subject, feathering the light on him. This was done to avoid glaring reflections off the shelves, which have a glossy finish, but it made for a nice even lighting. The key light was triggered using a pair of Yongnuo radio triggers.

To lighten the shadows and illuminate the background bookshelves a little, I first tried using a shoot-through umbrella aimed from camera-right. But with the way that umbrellas throw light around indiscriminately, specular reflections off the shelves were a problem. So I got rid of the umbrella and  bounced the bare speedlight off the ceiling. That worked nicely to simulate ambient light without adding reflections to the shelving. The bounce fill speedlight was triggered optically off the key light.

Normally when going for shallow depth of field while using off-camera flash, I go right on up to my camera's maximum flash sync speed of 1/320. That enables me to open my lens up as much as possible. But the Yongnuo triggers introduce a bit of latency and lower the sync speed to 1/200. So I have compensate with 2/3 stop more flash power. But that's the worst of the complaints I have with the Yongnuo triggers, which are actually pretty darn great for the less than $30 I paid for them.
Labels: photography