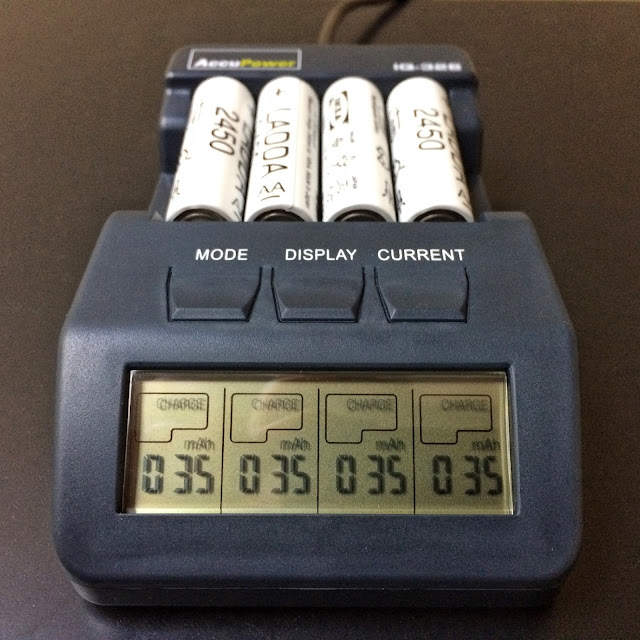 A few years ago, I set out to switch from alkaline to rechargeable NiMH batteries for my speedlights. NiMH batteries are superior in almost every way to alkalines: they're cheaper (in the long haul); they'll recycle a speedlight to full power much faster; and they're environmentally friendlier. Yeah, there's the hassle of recharging them, but the benefits far outweigh the costs.

So, three Christmases ago I asked Santa for a smart charger to start my rechargeable journey and he got me one.

But oddly, I never got around to switching over.

The issue was that the initial cash outlay for NiMH batteries to power multiple speedlights and radio triggers is pretty steep (even though, as I said, in the long haul it's a financial no-brainer). It was one of those deals where I intended to buy them in the future when I had a little extra cash, but never got around to doing so. Photo sessions would come up where I needed batteries, but the sessions always seemed to occur when I didn't want to spend that much money. So I'd just grab some fresh alkalines from the kitchen drawer that my wife keeps well-stocked with batteries for the kids' toys. This cycle repeated over and over for 3 years.

Of course we spent more money over those 3 years than if I had just bit the bullet and bought rechargeables in the first place.  It didn't help that my wife was physically buying those alkalines, not me, so I was insulated from the feeling of wasting money. In any case, science has proven that it's hard to change short-term behaviors for long-term benefits (otherwise everybody would quit smoking, eat better, and exercise), and I did my part to demonstrate the validity of that principle.

But recently, I made the switch.

The catalyst for finally joining the 21st century was stumbling across IKEA Ladda batteries on the Internet. Laddas are high capacity, low self-discharge NiMH batteries. On paper, they're very similar to Panasonic eneloops, which are one of the most popular rechargeable batteries for strobists due to their performance. In fact, a lot of people on the 'Net are claiming that Laddas are re-badged eneloops.

I don't know about that, but here's what I do know: Where eneloops go for about $15 for a 4-pack (less if you hunt around online), Laddas go for $7 every day at your local IKEA!

For me, that puts Ladda batteries in the "Just buy 'em now" category, instead of the "Hold off until you have some extra dough" category.

So I bought enough batteries to power every speedlight and trigger that I have, plus an extra 4-pack each of AA and AAA batteries. Eventually I want to have 2 complete sets of batteries for each device. That way I can always have a fresh set of batteries in my devices while simultaneously charging the drained ones.

Now that I have batteries, I finally got to use that charger that Santa got me. It works great! It's an AccuPower IQ-328. They don't even make the model anymore, but basically it's a cheaper copy of the La Crosse BC-1000, which is kind of the Mack Daddy of battery chargers for strobists. The IQ-328 worked fine. It ought to considering that it's been sitting unused in its box for the last 3 years! It seems like a very nice charger with an excellent feature set. The user manual is very poorly translated from the original German, but it's not hard to work out what they're trying to say.

I haven't tested the Laddas in my speedlights yet, but I'm expecting them to work great given all the other people who've had excellent results with them.

Here's a little trick I came up with for AA and AAA batteries. If you're using them for speedlights, you're likely to carry a bunch of them around with you. And it's a good idea to keep the battery contacts from touching each other or other metal objects so that you don't accidentally discharge them in your bag. I take the original packaging and remove the clear plastic tray from the cardboard backing. I put the batteries back in the tray and wrap a rubber band around the tray to hold the batteries in. That makes a nice, neat little package that insulates the contacts. 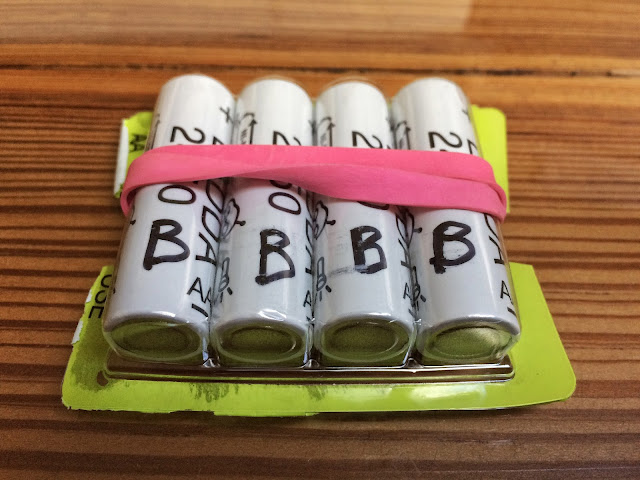 Storing them in the tray also helps you keep a matched set of four batteries bundled together, which you'll want to do with rechargeables.  When you load a device with rechargeable batteries, you always want to use the same brand, type, and capacity of battery. Moreover, you want to charge and discharge the set of batteries together. That will make them perform better and last longer. I took a Sharpie and marked quartets of batteries with a unique letter so I can always use and recharge them together. Each quartet lives in its own tray so that I can keep the sets organized and easy to find.

I'll report back after I have some time with the Laddas, but I'm hoping it'll be a very high performing and cost-effective system.