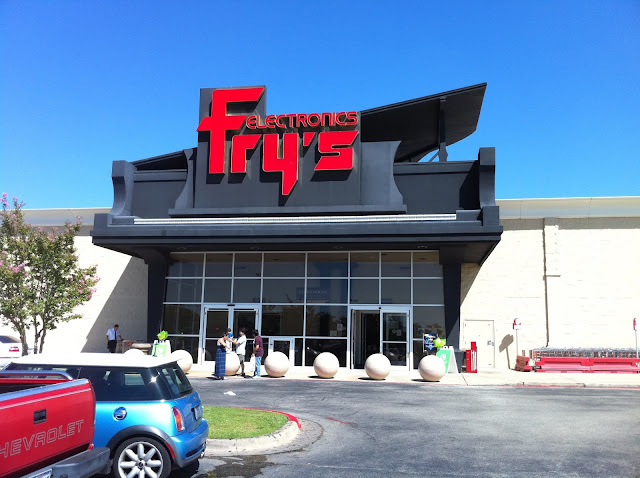 Fry's went out of business today.

In general, I don't mourn the loss of big box chain stores all that much. The past success of these stores was achieved at the expense of thousands of the small local stores across the country. Those big box stores didn't really care about the little guys, so I don't shed many tears for them now that the Amazon behemoth is killing them off. (I do of course worry about the long-term effects of consolidating all retail down to a small number of vendors, but that was also my concern with the big boxes killing the locals. And it's a topic for another day.)

Fry's is a bit different for me though. I just remember what an amazing experience it was to visit my first Fry’s in Austin in the '90s. The selection was mind-boggling in those pre-Amazon days. Pretty much anything electronic, they had it, in stock, on the shelves, ready to take home. And it was one of the few convenient and dependable places I could find raw electronic parts - resisters, capacitors, and so on. I loved that store and thought they kicked Best Buy’s ass from here to Sunday. And everybody else thought so too because that store would get crowded, especially on weekends.

But in 2011, I moved to Katy, TX and the nearest Fry's was an hour's drive away so I didn't go very often. And when I moved to Raleigh a few years later, there was no Fry's at all. So I hadn't been to one in many years.

Then a couple years a ago, I went to Austin on a business trip and stopped by that Austin store to pick up some SD memory cards. I was shocked by how much it had changed. It was a barren wasteland! Bare shelves, very few shoppers, just a handful of employees.

I figured, okay, maybe they've switched focus to online sales. So I visited their web site and was shocked again at what a paltry web site they had. It looked 20 years old and the inventory was as bad as the brick and mortar stores. Apparently, Fry's didn’t even put up a fight for online sales.

It was obvious then that Fry's had died on the vine and it made me a bit sad. Based on how depleted that store looked looked two years ago, I’m surprised it took so long for them to officially pull the plug.

I miss that experience of visiting Fry's in its prime. It was a tech nerd's paradise. And being physically there in the middle of it made shopping exciting.

RIP Fry's. You're the one big box store that I'll actually miss.