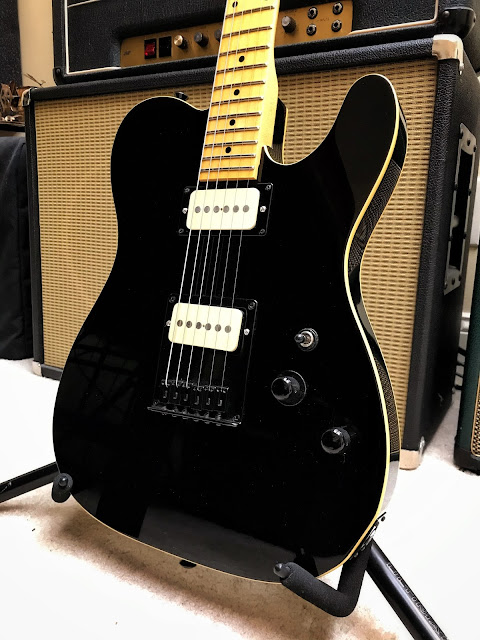 Back in the late 90s and early 2000s, I went through a period of obsession with P90 pickups. I had them in a hollowbody guitar I had at the time, and I really loved them in Les Paul Juniors, Specials, and the P90-loaded Hamer Specials of the 1990s. I really liked (and still do) how they sound fat and a bit raunchy with overdrive, but clean up nicely and get more refined-sounding when you roll back the guitar volume.

In my thirst for knowledge about all things P90, I investigated humbucker-sized P90 equivalents and that's when I discovered the Harmonic Design Z90 pickup. I bought a pair sound-unheard and installed them into my PRS Custom 22.

And that was instant love.

The Z90 is an amazing pickup. It's not the most accurate P90 clone, although a P90 is the closest comp I can think of. I find the Z90 to be more open, and full-range sounding (instead of being heavily concentrated in the mids like a P90). It has a very big and balanced sound with a bit of sizzling top, a fat bottom, and plenty of midrange push. And like any good singlecoil, it cleans up extremely well with changes to picking strength and the volume control. I played the Z90s in my Custom 22 for close to 10 years before finally reinstalling the stock PRS Dragon pickups because I missed the versatility of that guitar's original switching arrangement (which the Z90s were incompatible with).

But I still loved the Z90 pickups and really wanted to have another guitar that I could install them in. So I bought a lightly used Schecter PT for a good price with the idea of installing them in that. The PT is very different from Schecter's current model line-up. It's named after Pete Townshend, who played a similar, custom-made Schecter Tele back in the early '80s back when they were a parts supplier, before the brand became associated with metal players. On paper, the PT was a terrific host for the Z90s.

And so began the long, drawn-out process of creating a good home for the Z90s.

I ran into several issues getting the Z90s into the PT. First, I had decided to replace all the electronics at the same time with good quality parts because this quasi-reissue model of the PT had cheap electronic components. What I didn't realize was that the body holes for the potentiometers would need to be enlarged to accommodate the bigger US pots. So that extended the project.

So then I did a very, very dumb thing. I tried to force-fit screws that were too big into the Z90s. Looking back, I just shake my head and marvel at my stupidity. (Pro tip: If the term "force-fit" can be applied to anything you're considering doing, especially to a guitar, it's virtually guaranteed to be a really bad idea.) I ended up stripping the threads on both pickup mounting plates!

I did manage to get the pickups into the guitar, but in doing so, I rendered them non-adjustable. And worse, they were stuck at a height that was too low. So these pickups that I loved just didn't sound very good anymore. As a result, the PT sat on a stand near my bed for many years as my "noodling around" guitar, very rarely getting plugged in. It was just laziness on my part. I had lost my enthusiasm for the project after screwing it up.

Finally about a month ago, I decided come hell or high water, I would turn the PT into the guitar that I'd originally envisioned.

I removed the Z90 pickups with the intention of retapping the screw holes on the base plates. That didn't work because the holes were now enlarged. So I decided to drill out the holes even further and solder nuts onto the bottom of the pickups' base plates, so the mounting screws would go through the baseplates and engage with the nuts on the other side. When I drilled out one of the base plates, the delicate connector wire on the pickup became detached, so I had to resolder that. Then, the base plates didn't take to soldering because they're made of aluminum. Grrrr. So I ended up using a very strong epoxy to glue the nuts onto the base plates. And after a false start where I didn't have the gluing surfaces properly scuffed up, that finally worked. Because this project basically fought me the entire way, it ended up taking an entire month.

But I finally finished it yesterday. I got the pickups mounted and soldered into the guitar, and the adjustment screws worked perfectly. I strung the guitar with some Elixir Optiweb strings, which I recently switched to. I did a full setup on the guitar, getting the neck relief, action, intonation, and pickup height all adjusted properly.

Of course, I now wish I'd done this years ago! I'm reminded how much I adore these pickups, and the PT is in fact a great host guitar for them. I adjusted out most of the neck relief so it plays a more easily and the intonation is now on-the-money so the guitar is especially sweet-sounding all the way up the neck. It's become a very satisfying instrument to play. And it's cool-looking too. The cream-colored Z90s pick up the creme binding and contrast with the black body. The whole thing gives off a classy vintage tuxedo kind of a vibe.

Nice to finally finish a project that had been languishing for so many years!