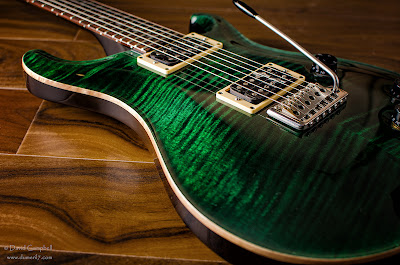 I took a little break from photographing guitars for most of the holiday, but now I'm back at it with number 5 in the series.  This a a 1996 Paul Reed Smith Custom 22.  The Custom 22 was a 22-fret version of the guitar that put PRS on the map – the Custom (later renamed the Custom 24).  Frankly, having two more frets at the very top of the neck doesn't mean much to me, as I just don't spend a lot of time way up there.  However, there are more pragmatic considerations that made me go with the 22-fret model:  First, the feel is slightly different.  When you add 2 frets, you can't just make the neck longer because that would change the scale length (the distance from the nut to the bridge).  You have to extend the fretboard into the body area and either change the body shape a little to allow access or make the player reach over the body to get at the extra frets.  PRS did a little of both and it changes the feel a bit.  Secondly, with 22-frets the neck pickup is placed right on the two octave node of the string.  You can argue whether that is a good or a bad thing from a physics point of view, but I like it because sound-wise it's a tried-and-true formula with the most venerated solidbody guitars, including the Gibson Les Paul, Fender Telecaster, and Fender Stratocaster. 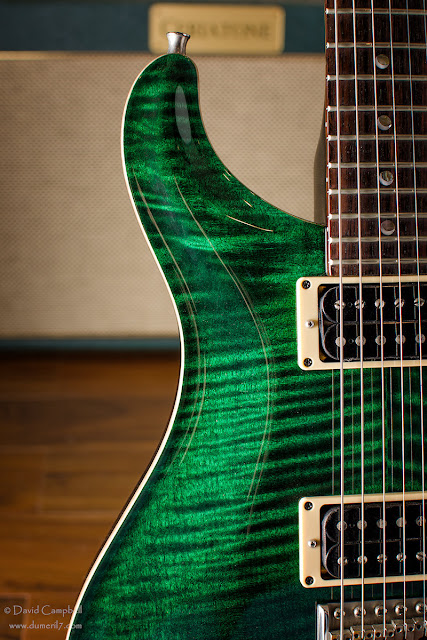 There are several unique features on the PRS Custom line of guitars.  First, they employ a 25" scale length – something of a compromise between a Gibson and a Fender scale length.  For my money, it feels and sounds closer to a Gibson, with maybe a tiny bit more twang than a Les Paul.  But that could very well be confirmation bias – my perception being altered by what I expect to happen as a result of a slightly longer scale length. 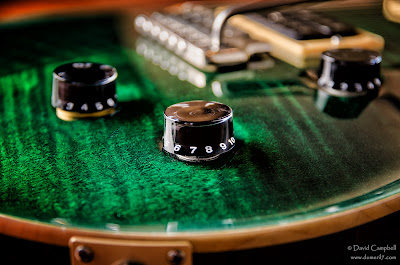 The Custom 22 also comes standard with a 5-way rotary switch that combines different coils of the two humbuckers, in series or parallel.

So you get your standard single-humbucker sounds in Positions 10 and 6. To my ears, Position 8 is kind of similar to the middle humbucker sound of a 3-pickup Les Paul Custom. Positions 9 and 7 resemble the "in-between" pickups positions of a Strat, with the 9 being the slightly brighter of the two. It's a very versatile arrangement, although a lot of people don't like the rotary switch because it's not as quick or easy to use as a traditional toggle switch and it's harder to tell what setting you have it on by looking at it.  I've used the rotary for so long that I'm very accustomed to it. 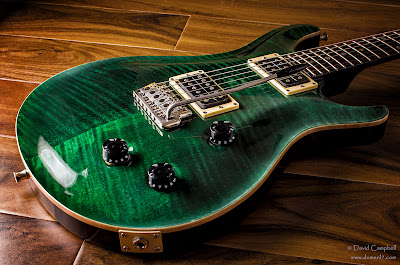 PRS was also one of the early manufacturers to use locking tuners.  This guitar has the original PRS "Phase I" locking tuners, which I like quite a bit. They hold the tuning well, the locking mechanism adds less weight than other locking designs, they're way less hassle than a locking nut, and they preserve the feel and sound of having a traditional guitar nut. Some people don't like the Phase I tuners because they find them hard to use. The way they work is a bit subtle – there's a flat side of the tuning post that has to be oriented correctly in its rotation in order to lock the string with the cam. Once you understand how they work, these tuners are actually very easy to string because the cam mechanism automatically clamps down on the string as you raise the strings to pitch, so there's no separate locking knob to deal with. There are two aspects of these tuners that I consider legitimate negatives, however: first is that they have a 14:1 gear ratio, which is too coarse for my tastes. I prefer finer control than that. The second is that changing strings on a dark stage is difficult because of having to orient the post. It's a good idea to bring a flashlight so you can see what you're doing better. But those are relatively minor drawbacks to a system that otherwise works exceedingly well. 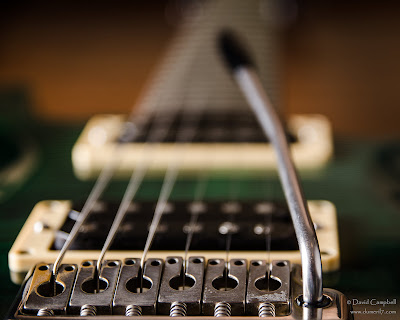 One thing that PRS deservedly gets a lot of credit for is the quality and setup of their guitars. In my opinion, they have the highest consistent quality level of any mass production guitar maker. You take virtually any PRS off the wall at the store, and assuming nobody has messed with it or damaged it, it will play like a dream and have spot-on intonation. And that's what I like best about my Custom 22. The action and neck feel of this guitar is just beautiful. Combine that with the slim, well-balanced, and amazingly resonant body, and it's just a joy to play. 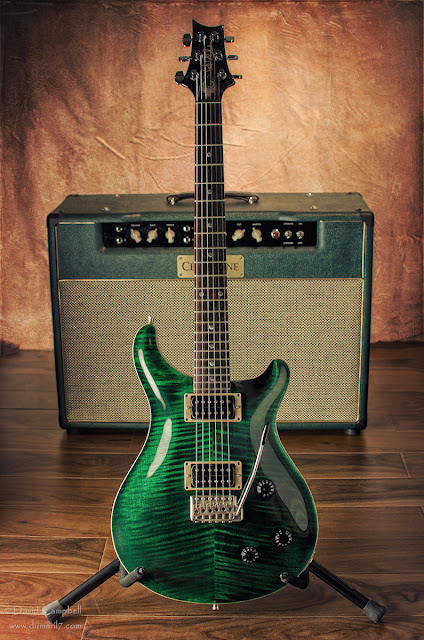 This guitar has the original-spec Dragon I pickups. The neck pickup is nice. It's slightly overwound relative to a vintage PAF and has a nice open and balanced sound, which I think is a virtue of its Alnico IV magnets. However, the Dragon I bridge pickup is the Achilles heel of these old Custom 22's in my opinion. It's simply over-powered with ceramic magnets and a whopping 19K DC resistance. The bobbins must be on the verge of over-flowing with wire! High-output pickups can be cool if you are only interested in high-gain tones, but they just don't work as well for low- and mid-gain tones in my opinion. For almost 10 years, I used a pair of Harmonic Design Z90s in this guitar, but I switched back to the PRS pickups because I missed the versatility of its 5-way rotary switching. One day I will almost certainly install different pickups in this guitar, but it can be challenging to find ones that work well in the split-coil modes offered by the 5-way rotary. I should also mention that I think PRS have really broken the code on how to make good pickups now! I love the DGT pickups and the various "50" series pickups that I've tried in my friends' guitars have all been excellent.

Of course, you can't talk about PRS without mentioning their flame maple tops and finishes. The guitar here is not even a "10-Top" (PRS's designation for their most-figured maple tops), but the wood top on this guitar is still pretty amazing as you can see. And PRS offers a huge variety of gorgeous finishes to show them off. More than any other innovation, I suspect all the beautiful translucent colors over flamed maple convinced a lot of players to try a PRS.  It certainly encouraged me.