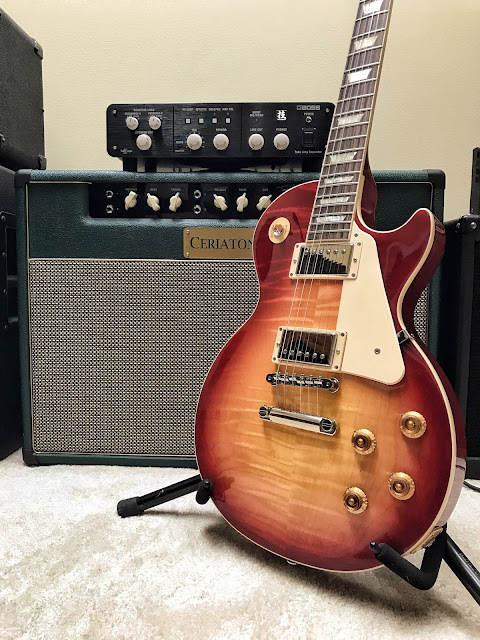 I've been enamored with Gibson Les Pauls since before I actually played guitar. My earliest exposure to music was through my sibling's records – Led Zeppelin, The Beatles, Creedence Clearwater Revival, The Who, and other late '60s and early '70s rock bands. When I was 11 year old, I bought my first two albums with my own money – Book of Dreams by Steve Miller and the first Boston album. There are a lot of Les Paul players in there!

Then, like most 13 year old boys of my generation, I got into KISS. And I just fell in love with Ace Frehley's Les Pauls. The LP became the quintessential rock guitar for me. The whole KISS schtick is pretty silly now, but Ace inspired me to play electric guitar and informed my entire concept of what electric guitar was. When I thought of an electric guitar, my mental image was a cherry sunburst Les Paul like his. I got a guitar a couple of years later, but of course I couldn't afford a Les Paul.

Fast-forward 40+ years. I've now played a lot of Les Pauls – a few on stage and in recording studios, but mostly at guitar shows, in music stores, and at friends' houses. But I've only just now bought one of my own! That's amazing to me, considering they're what started me on this journey and I was infatuated with them from before the beginning. I guess at the moments in my life where I've had enough scratch to actually buy one, there have always been other guitars that I wanted just a little more. But it's always felt like a big gap in my guitar experience.  So I finally decided to just bite the bullet and get one while I'm still young enough to really enjoy it and play it well.

So here's my LP, a Gibson Les Paul Standard '50s in Heritage Cherry Sunburst. Complete with that new guitar smell. It is, in fact, exactly what I needed. It sounds f'ing glorious (especially through my old Marshall), it plays well, and it's well-made which is not always a given with these things. I particularly love the neck. It has the ideal profile for me – chunky, but not a club. I got lucky and found one with a nice top and a relatively light weight (8.9 lbs) for a regular production model with no weight relief.

Of course, one of the first things I played on it was Cold Gin, which now that I think about it, was the first song I ever figured out by myself on the guitar.

Ace, wherever you are, thanks man. I'm a bit late to the party but I'm thrilled to be here.