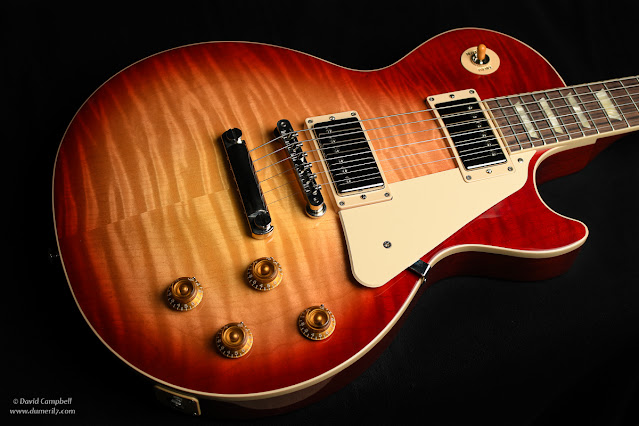 It's been a long time since I posted any new updates to my photography guitar series. But my new Les Paul was certainly going to break that silence. I don't get new guitars very often (the last one was over 10 years ago) and it's good to shoot these things before the guitar gets its share of scratches and dings. Still, I didn't get on it right away because I've been more motivated to play it than shoot it. But here it is, along with my candid thoughts about the guitar, although I have to warn you that I'm still in the honeymoon period with her. 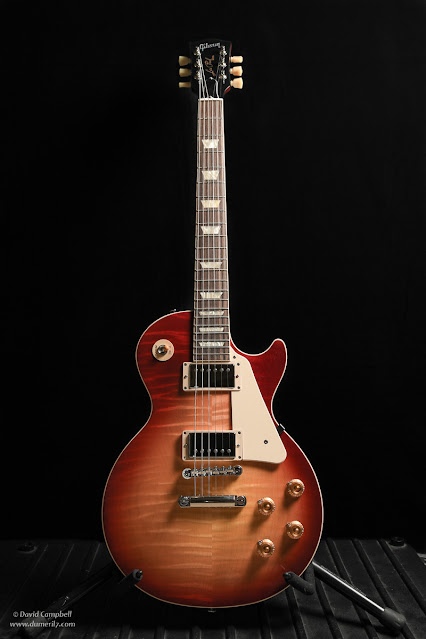 This is a 2021 Gibson Les Paul Standard '50s. It's part of Gibson USA's "Original Collection", which is their newly-conceived product line that "honors their heritage" by including the most important aspects of vintage Gibsons, while not being spare-no-expense reproductions of them. (The Gibson Custom Shop addresses that market very ably.) 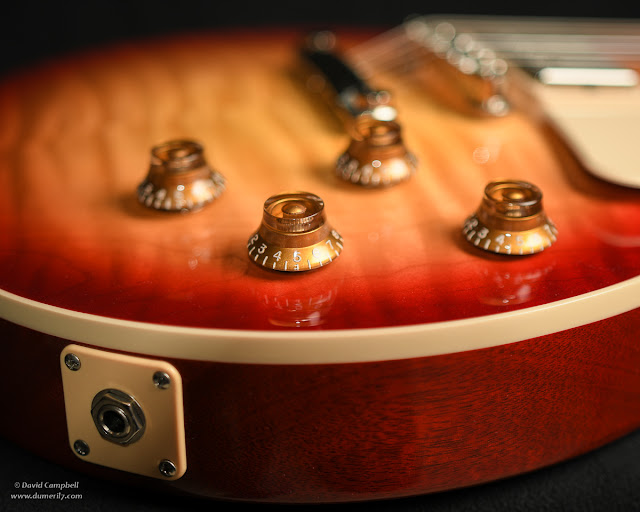 In other words, the Original Collection serves up exactly what I was looking for – it sticks as close to the vintage formula as possible, while still building to a more reasonable price point and using modern production methods. Philosophically, that's what I think a "standard" product should be – a stable model in the product line that reliably delivers the time-tested features that buyers want. Not a platform for questionable experiments, which is what the Les Paul Standard had morph into under the previous regime. To that end, the Standard '50s has a solid mahogany body with a 2-piece AA maple top, mahogany neck, rosewood fretboard with a 12" radius, trapezoid inlays, ABR-1 tune-o-matic bridge and stop bar tailpiece, vintage-output Burstbucker pickups, nitrocellulose lacquer finish, vintage-style tuners, and hand-wired guts with two volume and two tone controls and a 3-way pickup switch. Other period-correct details are a fully-solid body with no weight relief and a 17° angle on the headstock. The '50s model differs from its '60s model sibling in the Original Collection by having a fatter neck profile, Kluson-style tuners with pearloid keystone buttons, gold top hat knobs, and Alnico II-based Burstbucker 1 (neck) and 2 (bridge) pickups. It pretty much looks the part of a late '50s Les Paul.

The only things I would have liked to have seen on this model are a long tenon neck, '50s style wiring, and bridge posts that mount directly into the wood instead of Nashville-style metal bushings. But Gibson was building to a price point and had to draw the line somewhere. Besides, you can always buy a Custom Shop guitar if the production line guitar doesn't have every period-correct detail that you want. 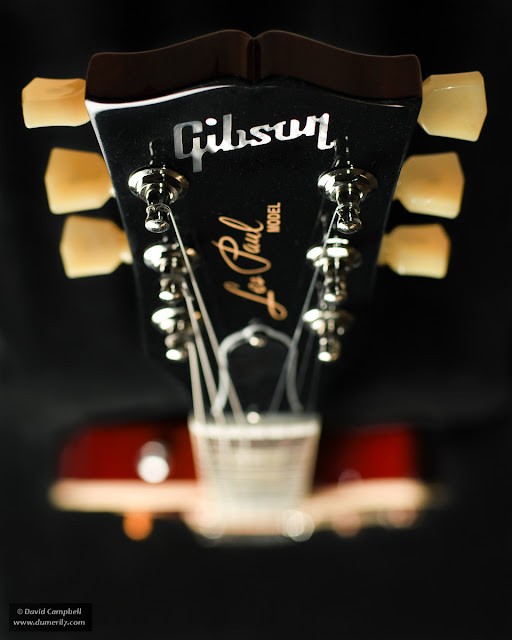 The finish is very nicely applied with a paler shade of yellow and a more transparent red than you often see on modern cherry sunburst guitars. The transition from yellow to red is a very artful gradient, not at all clown-bursty. The figuring in the maple is nice and 3D looking but varies dramatically depending on the angle of light, including disappearing altogether! Like a Hollywood actor, some angles are more flattering than others. Which is why it's not considered a AAA top. I carefully shot most my photos to maximize the flame effect (I also make my kids comb their hair before I photograph them), and it's not quite this dazzling in most normal lighting situations. But it is very pretty. And light! Only 8.9 lbs, which is fairly svelte as modern USA Les Pauls with no weight relief go.

The guitar gives an overall impression of solidity. It just feels solid and well put together. I've pored over it in quite a bit of detail, trying to summon my OCD superpowers. The inlays are straight and there is no gap-filling epoxy. The pickups are mounted squarely in the rings. The tuners have a nice, easy, but controlled action with no free play. The nut is cut correctly, with nicely rounded ends, and the binding nibs are executed well. The control cavity is tidy with good solder joints, although it really ought to be fully shielded. (One day, after the warranty has expired and I'm feeling particularly productive, I'll probably do it myself.) The only issues I found on this guitar were a couple of small cosmetic blemishes in the neck binding – one nick from fret shaping, a very slight ledge at the neck/body joint, and a small area of orange peel on the underside binding near the nut. Candidly, a lot of people would not even be able to spot these. On the whole, a respectable job that shows more attention to detail than I've seen on a lot of Les Pauls over the years. I hope this guitar is representative of current Gibson USA production quality. 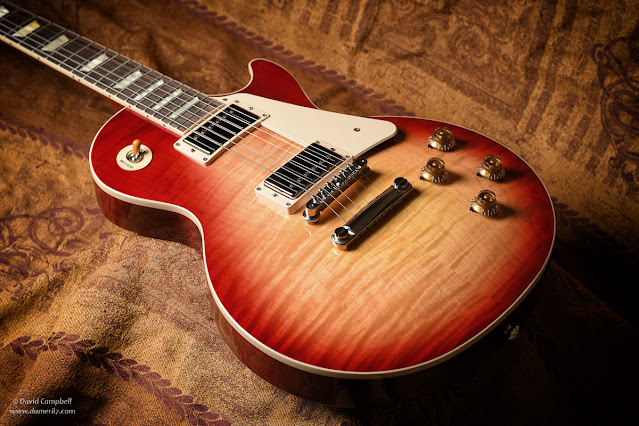 Of all the guitars I've owned over the years, this one has the best neck profile hands-down. For my big mitts, the '50s neck is girthy, but not club-like. It gives me something substantial to hold onto when doing bends, but it doesn't impede play-ability even on the higher frets. Honestly, if I could have this neck profile magically appear on all my guitars, I'd be a very happy dude. The action from the factory is very low. It seems on-the-money for the Gibson factory specs of 3/64" on the treble side and 5/64" on the bass, which is a bit too low for me. As a testimony to the PLEK system that Gibson uses, the guitar is buzz-free despite the low action and minimal neck relief. It plays beautifully, except for one thing: the frets have a bit of a gritty feel when bending that could have been smoothed out with some additional polishing. At the next string change, I'll be raising the action a little bit and polishing those frets. 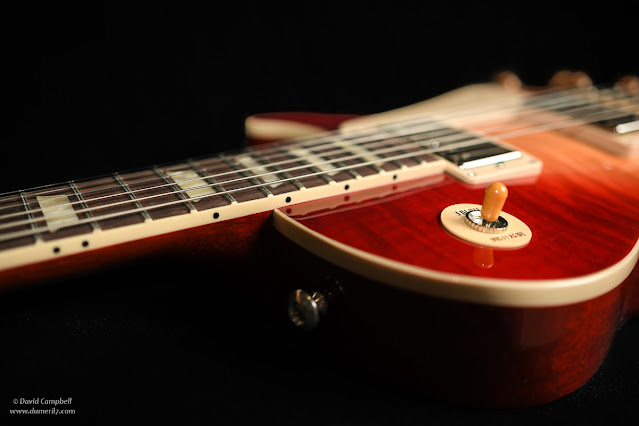 Sound-wise, this is what I'd expect from a vintage-inspired Les Paul. It has a nice, loud acoustic sound, which is always a good sign. In fact, it has the loudest acoustic voice of any solidbody guitar I've owned. I particularly like the bridge pickup, which is warm and fat, with enough sting to cut through the mix. Depending on how you dial in your amp, it can sound sweet and singing, fat and squawky, or tight and crunchy. It's a very satisfying pickup that has the blues and classic rock thing down. The neck pickup is very warm and vocal sounding and it works well for sweet, singing leads, although the bass is a bit loose and uncontrolled. The combined pickup setting is very nice. It hollows out the mids a little bit and adds a bit of singlecoil-like clarity, which I like. Overall, I'd say that this guitar sounds like a good Les Paul should, although I'd prefer a more articulate treble response and a tighter low-end from the neck pickup. This is my most common complaint with dual-humbucker guitars, and this Les Paul is no different. I find it difficult to dial in sounds on my amps that work well with both pickups on a Les Paul. Get the bridge sounding right, and the neck pickup is a bit muddy and wooly. Get the neck right and the bridge pickup is a bit thin and screechy. 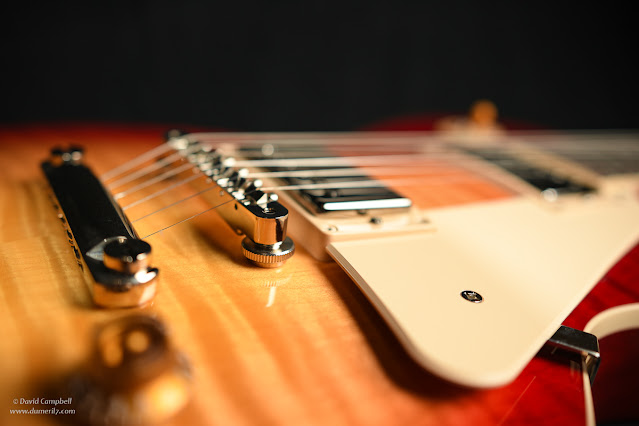 At some point in the future, I will probably experiment with swapping out the neck pickup's magnet for an Alnico IV to help balance its sound with the bridge pickup a bit better. The other thing I'll probably do is change the wiring to '50s style wiring so that the volume controls don't bleed off as much treble. That's a very easy and reversible mod that I highly recommend for players like me that use their volume controls a lot to clean up their tone. 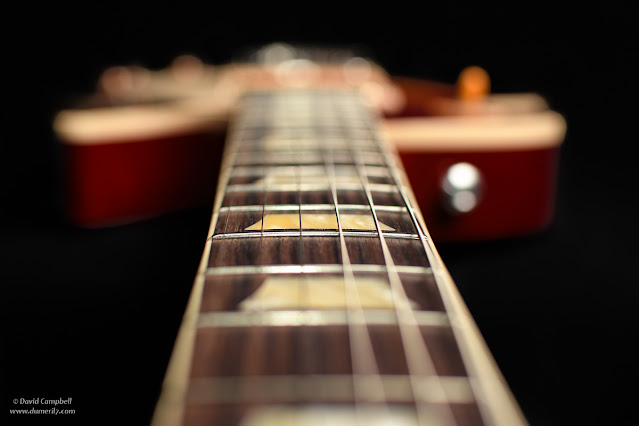 I was pretty impressed with the case candy included with this guitar. A great smelling leather strap, a handy guitar multitool, a microfiber polishing cloth, an extra trust rod cover without the script-styled "Standard" logo, a completed QC checklist and photo of the guitar on their bench, warranty information, and an owners manual. The case is quite attractive and nicely made. Overall, a better than average unboxing experience.

So that's my new Les Paul. Just what the doctor ordered. 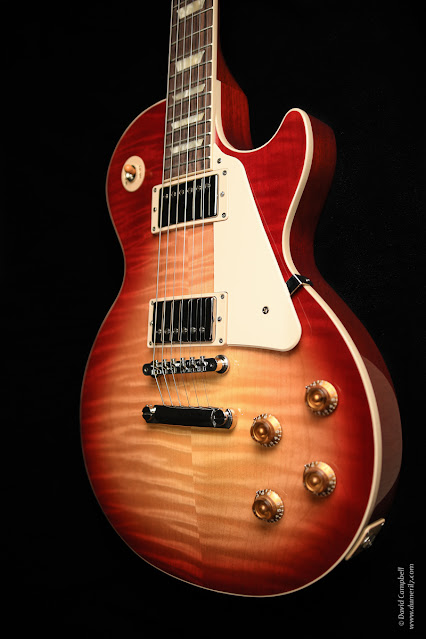 A bit about the photography. I shot all of these in my studio. Lighting was courtesy of a single speedlight through a 24" Lastolite Ezybox. I shot most of the photos against a black seamless backdrop. For a few of the shots, I took the comforter off my bed and pressed it into duty as a fancier backdrop. As usual when I shoot with artificial light, I shot in manual mode on both the camera and the speedlight to lock down the settings, and used Nikon CLS to trigger and control the speedlight. Most of the shots were at f/1.8, f/2.5, or f/5, depending on whether I wanted more or less depth of field. I'm very pleased with how these turned out, despite having made one very significant blunder while shooting: I shot the photos in JPG instead of RAW! I almost never do that because I usually keep the camera in RAW mode. As a result, there is actually less post-processing on these photos than I would normally do because I didn't want to push things too far with the reduced bit depth. Still, they came out quite well in my opinion.