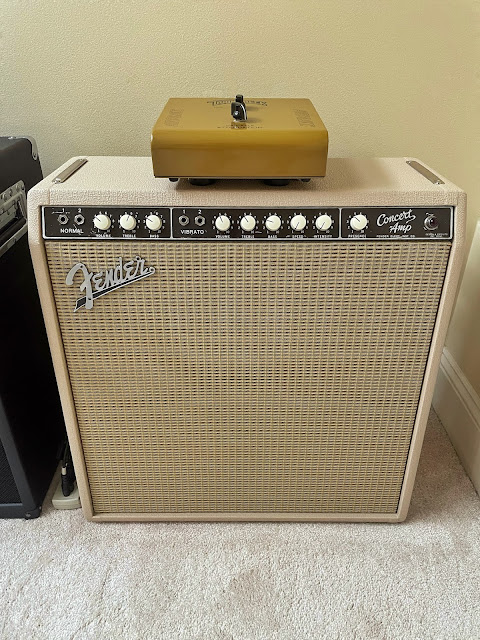 Way back in 1999, I was in Austin Vintage Guitars and made an impulse buy on an amp. It was 1963 Fender Concert – one of the Fender "brownface" era amps, which are lesser-known but are still revered among vintage Fender fans. Outside its pedigree as a vintage Fender, it was not what most players would consider a "desirable amp". In fact, my wife thought I was crazy. And she had a point – it looked like shit. The cabinet had been stripped of its original brown Tolex and refinished with a poorly-done varnish stain. The wheat grill cloth had been replaced with a black one that was just all kinds of wrong. Lots of components in the circuit had been replaced, it had a hole drilled in the back of the chassis from some previous modification, and the tube chart had unfortunately been removed. The speakers had also been replaced with some vintage alnico Wilder speakers which were actually pretty cool, but they weren't really appropriate for the amp and they had weird red doping applied to the surrounds that tended to drip when it was hot and make a mess! The one thing this amp had going for it other than being an old Fender was that it sounded pretty good, despite its sorry state. But the real reason I bought it was because it was only $500 and I naively thought a restoration would be a cool project.

The first thing I did was sort out some electronic issues. It was prone to odd intermittent noises and some of the electrolytic caps needed to be replaced. I also restored the circuit to conform with the original 6G12-A schematic and I bought a set of four Jensen P10R reissue speakers to use in the restoration. There were a lot of replaced electronic components in the circuit (more than just electrolytic caps), but I stopped short of replacing them with vintage parts. If a part was the right electronic value and it functioned properly, I kept it.

After getting the amp's electronics squared away, I installed the Concert's chassis into a 2x10 Vibrolux-style cabinet I got on clearance from Kendrick Amplifiers. It was supposed to be a temporary arrangement while I worked on the Concert's original 4x10 cabinet. The 2x10 cab was loaded with a pair of Weber C10N (now called 10F150) speakers.

Well, as projects often do, this one lasted longer than expected. Over 20 years! For the first few years, the Concert in its "temporary" cabinet got gigged quite a bit as my main amp in the swing/jump-blues band I was in at the time. But the sad truth is that the Concert sat in the 2x10 cabinet, the new speakers sat in their shipping box, and the original 4x10 cabinet and hardware sat in storage for most of those years. I'd play the amp every once in a while only to keep the electrolytic capacitors from drying out. With those speakers, the Concert just didn't do anything other than jump/swing very well. Although the tremolo was killer, the overall tone was relentlessly clean, overly-warm (i.e. dull), and tubby-sounding to really work for anything else that I played.

Since moving to North Carolina in 2014, the Concert had been weighing on my mind. The amp was kind of an albatross. I didn't like its sound enough to play it very much, but I wasn't willing to sell it because I knew I'd take a beating on the price before it was restored. And the thought was occurring to me that if I didn't push through and get it completed, 20 years could easily turn into 40, and my kids might inherit this abandoned project with zero desire or know-how to complete it. And that would be a crying shame because this amp deserved a lot better than being condemned to the Island of Misfit Toys.

So this year I picked the project back up. The amp had developed some new noise gremlins, but they were remedied with some squirts of DeoxIT in the pots and tube sockets. Given all the non-original parts, that freed me to take some liberties with the cosmetic styling, so I went with more of a blonde Twin look with cream Tolex, wheat grill, and cream knobs. It looks totally vintage, but of course brownface Concerts were never made in this color scheme.

The restoration was completed on August 28, and it was a very happy day for me. I'm really delighted with the way it turned out. The amp is stunning looking in my opinion.

But even more importantly, I love the way this amp now sounds! I halfway expected to sell the Concert after finally finishing the restoration, but I have no desire to do that right now. It sounds so much better in the 4x10 configuration with the Jensen speakers! It validates a suspicion I had that the Weber C10N's were responsible for the Concert sounding so dull, tubby, and clean. The Jensens are brighter, not as bass-heavy, and they break up way sooner and in a pleasing way, all of which is a much better match to the voice of this amp. I never appreciated just how much speaker break-up can contribute to the crunch sound of an amp, but these speakers made it super obvious – the amp sounds much more aggressive now! P10R's are sometimes maligned on the Internet, but they work really well with this amp, which demonstrates that it's hard to judge the sound of a speaker independent of everything else. (As an aside, I'm very glad I bought my speakers 16 years ago. Nowadays they go for about 3 times what I paid for mine!)

Not only does the amp sound better, but it's also not nearly as loud, despite having twice as many speakers. The Jensens are rated at 94.2 dB sensitivity, which is very low for a guitar speaker. Weber doesn't supply sensitivity specs, but the volume difference is striking so I think they are considerably more sensitive. (This post corroborates what I'm hearing.) The amp at 4 or 5 is actually tolerable in my small studio with my Kendrick Airbrake attenuator. With the C10Ns, the amp was absolutely punishing at that setting, even with the Airbrake.

So, let me describe the tone of these big brownface amps like the Concert (small brownface amps like the Deluxe and Princeton are different animals...). A lot of people say that they are sort of a mix between blackface and tweed. In some ways that's true, but to put it that way might lead a person to think that it sounds halfway between the two, and that's not accurate. It's more that it combines different aspects of each. The Concert sounds more similar to a blackface Super Reverb than a tweed Bassman, but it isn't as scooped-sounding because it has a stouter mid-range, a more rounded treble, and a stiffer feel overall (fast attack and an in-your-face tonality from the high plate voltage). The low-end is very similar to a Super Reverb - very strong but prone to flabbiness if you crank both the volume and the bass at the same time. Allegorically, I would say that a blackface amp delivers head-shots, while a brownface delivers body blows.

I think this amp works best run clean or with moderate amounts of overdrive. Too much and it gets uncontrolled and muddy sounding. If you need more overdrive, it’s better to use a boost pedal of some sort than to turn up the amp volume more. Using a humbucker-equipped guitar also helps. That said, boost pedals sound terrific with this amp. A treble booster works particularly well, but a Klon style pedal or a clean boost both work well too. A Tube Screamer on the other hand, isn't optimal with this amp because there's just too much midrange in that pairing for me.

I’ve been so into British style amps for the last several years that I’d forgotten how amazing a vintage Fender can sound! There’s a low-end authority that a brownface or blackface Fender has that vintage Marshall and Voxes can't really touch. On the other hand, British amps break up more pleasingly, especially at higher gain levels.

And of course, there's the fabled brownface "harmonic tremolo" circuit. What can I say? It sounds glorious. The circuit is kind of complicated, but it results in a tremolo that has a subtle bit of pitch modulation that almost gives a sort of Uni-vibe kind of character. It is sumptuous. So while the amp has a great core tone, the tremolo will always be the showpiece feature of the brownface Concert.

There are a couple of things I'd like to do with this amp. The first is to build a tremolo footswitch for it. When I bought it, it didn't include the original switch. Unfortunately, original vintage footswitches are literally hundreds of dollars, which is ridiculous. Even the couple of reproductions I found on Reverb are way over-priced in my opinion. An original spec footswitch consists of a switch, an RCA plug, an enclosure, some lamp cable, and couple globs of solder. That's it. So I'm going to make my own. It won't look like an original because I can't find a source for the conical enclosure that Fender used. But I have a concept for making a vintage-looking footswitch that will be a stylistic match even if it's not like the original, and it will be more rugged too. "It should be a fun project," repeating my thoughts from many years ago...

I'm also toying with the idea of putting in an aftermarket tweed Bassman output transformer wound for 8-ohms. That would make the amp more usable with my Boss Tube Amp Expander. My hesitation is that it will also make the amp even less original. On the other hand, it's already very non-original and of course I'd save the original transformer in case I ever did sell the amp. So it's not like I'm going to lose a bunch of money by doing it. But I'm still having the internal debate on it. The amp sounds great as-is and I can play it with the Airbrake, so I'm in no hurry on a decision.

But hopefully it doesn't take another 20 years.