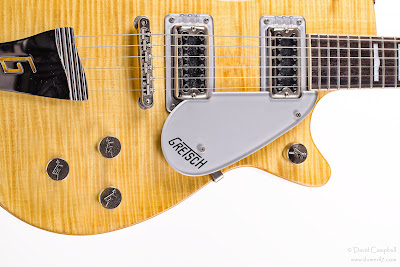 I had been meaning to get some nice photos of my guitars for quite awhile.  So this weekend I finally made some time and shot one of them.  This is a Gretsch New Jet, model G6114.  It's kind of a fancy version of a Duo Jet with a flame maple (veneer) top.  The New Jet was a Japanese model that was only made from 2001 to 2003.  It's not as nice as the American-made Jets, but it's a big step up from the Korean-made Electromatic line. It has a fairly chunky neck and it plays very nicely. 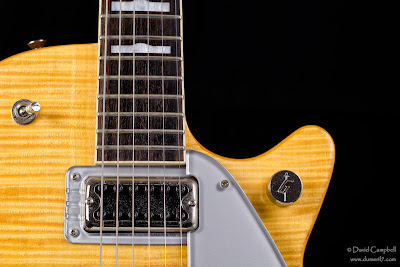 Consider the way the New Jet differs from the Duo Jet: flame maple top, hot pickups, thicker body with body contours, jumbo frets, tune-o-matic bridge. That reads like a recipe for turning the Duo Jet into a Bizarro World Les Paul! It's clear that Gretsch intended the New Jet to capture some Les Paul marketshare, which on paper seems like a pretty decent strategy. But alas, it didn't work. Despite being a great guitar, the New Jet was not a great seller. It was killed after only 3 years when Fender acquired Gretsch. 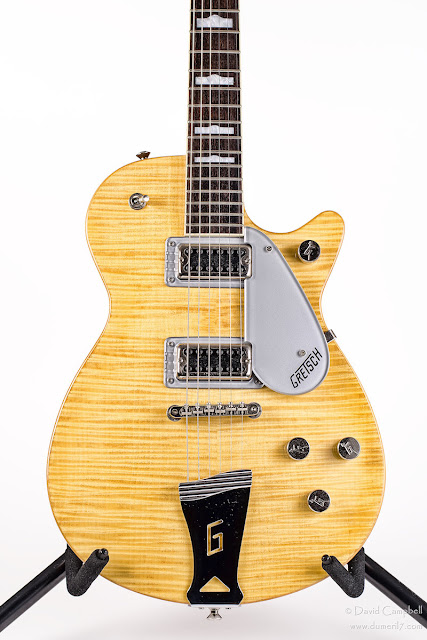 The best aspect of this guitar is the pair of TV Jones designed Filter'Tron pickups with alnico magnets.  TV Jones makes hands-down the best vintage style Filter'Trons you can get short of a real '50s era Gretsch. The pickups in this guitar are moderately hotter than vintage 'Trons and a bit darker sounding.  Paired with the right amp this guitar sounds terrific, not surprisingly.  It benefits greatly from new strings and I always try to keep a fresh set on it.

Another minor but cool thing about the New Jet is the vintage-style mounting of the tune-o-matic bridge. The bridge posts screw directly into the maple top, just like you'd find on a 1957 - 1960 Les Paul. This is one small area where Gretsch outdid Gibson with the New Jet. Since the introduction of the "Nashville" Tune-o-matic bridge in 1974, Gibson has screwed the posts into metal bushings implanted in the guitar top on all production Les Pauls (except for Historic reissues and a small handful of other models). Screwing the post directly into the wood provides much better bridge stability and coupling between the bridge and the body than the loose fitting bushings, and that increases resonance and vibration transfer. 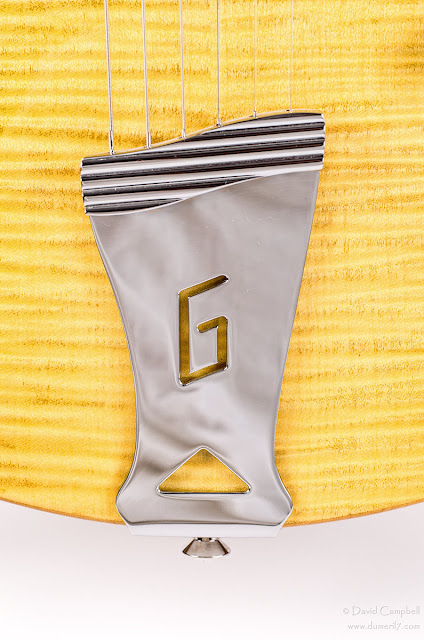 The controls are pretty much standard Gretsch fare: individual pickup volume controls, a master tone, and a master volume.  As much as I like Gretsch guitars, I'm not a fan of the Gretsch master volume arrangement. For me, it's too high of a price in tone for a feature of limited value. Every volume and tone control in a guitar circuit dampens the output level and dulls the tone a bit even when they're turned all the way up (unless you have special no-load pots). I believe that having two volume controls in the circuit adversely affects the tone of these guitars. Brian Setzer, undoubtedly one of the most famous Gretsch aficionados, rewires his 6120's to remove the individual pickup volumes from the circuit for exactly this reason.

Speaking of idiosyncratic Gretsch features, the New Jet doesn't have a mud switch! The mud switch (optimistically called the "tone selector" by Gretsch) is a second 3-way toggle switch next to the pickup selector switch on most Gretsch models with Filter'Tron pickups. In the "middle" position the tone circuit is bypassed completely, which is actually quite nice. In the "down" position, it rolls off some of the high end offering a warmer (or duller, depending on your tastes) tone. In the "up" position, the highs are rolled off heavily. The laudable goal is to enable quick, predictable tone changes. The problem is that the up and down positions both roll off treble aggressively, much more than a lot of players (including me) would like. And that's how the switch got its colloquial name. Now, you can simply leave it in the middle position, but the problem is that it's really easy to flip the switch accidentally while you're playing, which is a hassle for a feature that you don't even use. On the other hand, if you know how to change capacitors in the circuit, you can alter the treble rolloff for each setting to your taste and make the switch worthwhile. 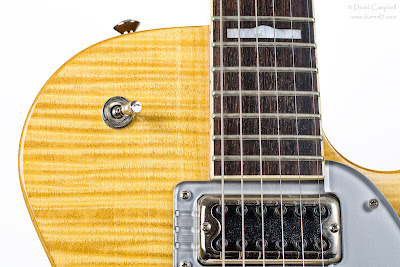 Okay, let's talk a bit about the photography. Here's a rigging set up shot.  I used a couple sheets of white poster board as my backdrop, clamped onto a mic stand.  I draped some black felt cloth onto a couple mic stands for the one black background shot.  For lighting, I used a shoot-through umbrella placed camera-right, and a 24" EzyBox softbox placed camera-left, both with speedlights.  I turned off the room lights before every shot so all lighting is from my speedlights.  The modifiers are placed even with, or slightly above, the guitar and the speedlights were set to equal power.  I also "feathered" both lights, aiming the center of the modifier (and therefore the brightest light) behind the guitar onto the background.  The umbrella and softbox are both big enough that a lot of light still falls onto the face of the guitar, but it's feathered - i.e. tapered from brighter to darker.  I think this adds some subtle 3-D depth to these head-on shots that might otherwise appear a bit flat.  I was expecting to have to fight with reflections off the face of the guitar, but I didn't.  I think that's because the finish on this particular guitar isn't as glossy as some.  When I get around to shooting some of my other guitars, I bet I'll have to deal with that.  As for lens, I used my 50mm f/1.8 lens for everything and did all my focusing manually using live view and zooming all the way in on a selected feature of the guitar.  I shot everything on a tripod and with a wireless remote to ensure tack-sharp images. 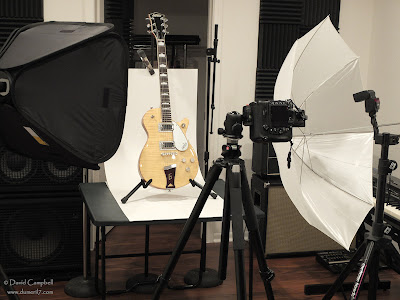 I learned one valuable lesson on this shoot:  These close-ups really show dust!  I cleaned up the guitar before shooting it, but apparently not enough.  Next time, I intend to use a compressed air can to blow as much as I can off the guitar, especially in the small crevices of all the machined bits.  Then I'll probably spend some time in post-processing, spot-healing any remaining dust particles.
Labels: guitar series music photography