Here's the second in what I've decided will be a series of guitar photos.  This guitar is a first model year D-03R, made by the Canadian company Larrivée.  The D-03R is a no-frills model with a satin finish and almost no ornamentation.  But it's got it where it counts: It's made from all solid woods and it has terrific fit and finish. Solid wood has a characteristic big, open sound that interestingly  improves with age, while a laminated wood guitar starts off sounding not quite as sweet and will keep that same sound over it's lifetime. This guitar sounds superb.  It has very little compression as you lay into it so it's very dynamic, and it's basically a bass cannon.  It's a bit thin in the mids for lead playing in my opinion, but it's wonderful for rhythm work.  The new model year D-03Rs are a little fancier with body and neck binding and a real pickguard.  But they're also considerably more expensive and aren't quite the no-brainer bargain these early ones were.

Below is the rigging shot.  The key light is a speedlight shot through a grid at camera-right (you can see it in the upper-right of the photo), shining down on the guitar like a spotlight. There's a speedlight on a little stand sitting on the bass amp towards the left of the photo.  Its light is being bounced off the ceiling for fill because my exposure settings (f/3.5, 1/200 sec, ISO 100) pretty much nuked the room light.  As with my last guitar photo, the lens is a 50mm prime.  It took quite a few photos before I zeroed in on the right amount of fill.  Not enough and the photo looks like a crummy flash shot where the subject is over-lit and everything else is in darkness; too much and you lose the spotlight effect from the key light.  But there's a big continuum of choices between those extremes and it's easy to get option anxiety trying to find the right balance. 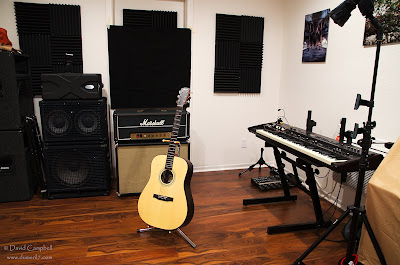