Number 4 in the series. This is a Lakland 55-01. It has a swamp ash body and a maple neck, and active Bartolini electronics. It has a nice, balanced, piano-like sound. Its tone works great for slapping and for fingerstyle.

Unfortunately I forgot to get a rigging shot, but everything was done with a speedlight through a 24" softbox on one side as the key light and a silver reflector on the other for fill.

I'm learning a lot doing these and in evaluating them after the fact.  For this one, I'm very pleased with the color and toning.  For whatever reason, bright red tends to be tough for digital cameras.  It's all too easy to blow out the red channel, which in this case would ruin the yellow-to-red fade blending in the finish of this guitar.  I worked hard in post-processing to get the sort of toning that I wanted without blowing out the reds and I was successful.  I also like the sharpness on the photos (with the exception of a few I rejected because the depth of field was too shallow) and the exploitation of the guitar's curves in the composition.

One area that I didn't do as well on was in handling reflections.  Since undertaking this project, I've looked at a lot of professional photography of guitars and the usual approach is to avoid large areas of specular highlighting.  I think you can go too far with that because specular highlights provide strong depth cues, and I think that a little bit looks nice.  For instance, I like the specular highlighting on the arm bevel and along the top curve in the photo at the top of the post.  I think it shows off the contouring of the body really nicely.  But I do agree that having a large portion of the face of a guitar covered in specular highlight would be a problem.  The problem I had however is that in a few of my photos the specular highlight showed up as a wrinkly looking area.  You can see it on the guitar's arm bevel in the two photos below.  It looks like the guitar's finish is marred, but the finish was perfectly smooth.  The problem was that the highlight was a reflection of a silver disk reflector and the wrinkles in the silver cloth reflected light at different efficiencies, showing up as wrinkles in the highlight.  Anyway, I should have caught it when capturing the images.  For the next set of photos in the series I'm going to try a white reflector.  I'm thinking the white might not have such wide variance in reflection due to wrinkles in the cloth and the highlight will be more even.  If that doesn't work, I'll try to angle the reflector to remove the specular highlight altogether. 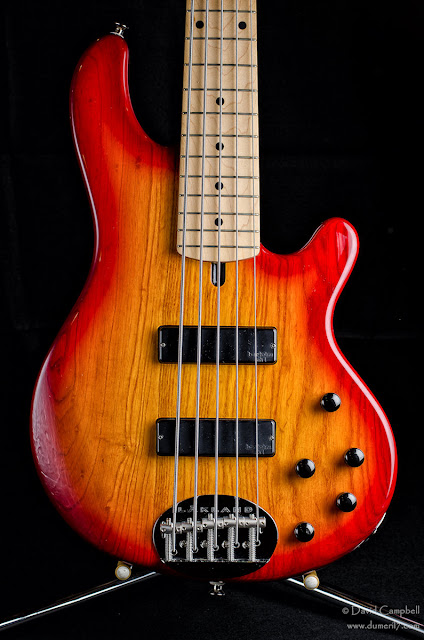 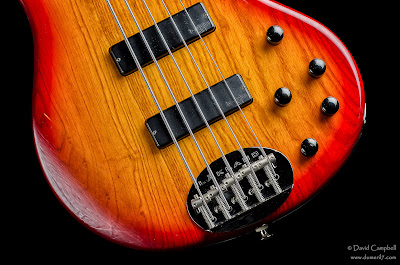 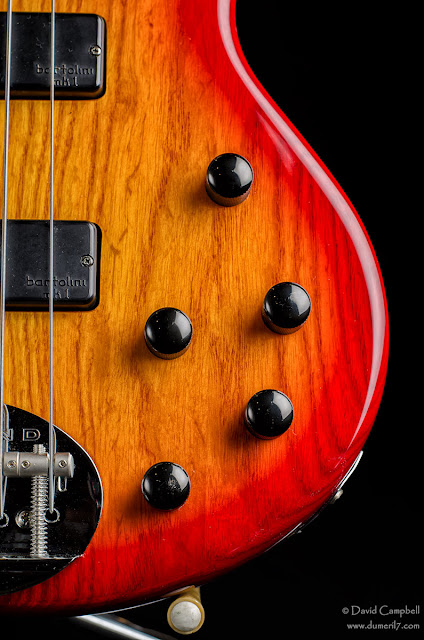 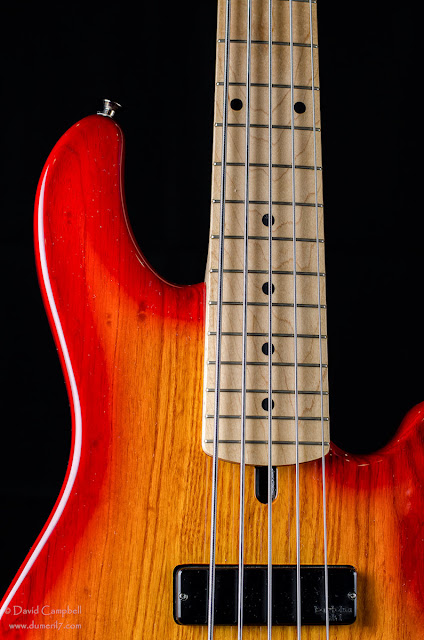 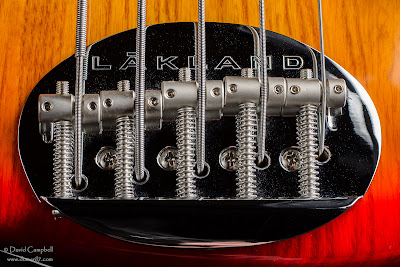 By the way,  I don't just site around taking photos of my guitars.  They get played, and often!  By me and occasionally by people I record.  This bass sounds as nice as it looks.  I recorded this song with John Fanelli, probably the finest bass player I've ever known.  He played all the killer funk bass; I played everything else.