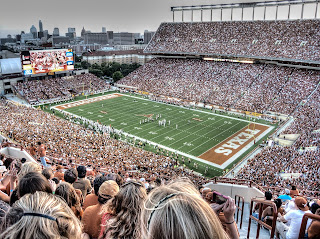 Despite being a big Texas Longhorns football fan, I decided awhile back not to post much about it.  That was driven by the fact that there are so many great Longhorn blogs out there written by people who know more about it than I ever will.  But I'm making an exception in this case to just write a few thoughts as we near the end of the conference schedule.

I think it's safe to say that relative to everybody's expectations, including the team's, the Longhorns have underachieved.  And it certainly has been an emotional roller coaster.  But at the same time, I'm proud of the team's Never Say Die attitude.  Starting the season off 1-2 would have totally sunk a team made of lesser stuff, but these kids showed at incredible amount of heart and I'm proud of them in a way that I can't really say about other Longhorns teams that maybe won more games.

Greg Robinson saved our season, there's no other way to put it.  He didn't magically turn his charges into a top-20 defense, but he stopped the hemorrhaging and gave us a chance to have a winning season.  When he was hired, like a lot of other people I looked at his record at Michigan and Syracuse and thought, "This is pure desperation."  And it was.  But it paid off.  Mack Brown deserves some credit for having Robinson in the wings and being willing to pull the plug on Manny Diaz mid-season.  That's a gutsy call.  On the other hand, Brown also deserves considerable blame for not having pulled the plug on Diaz at the end of 2012.  If he'd done that, it's not a big stretch to think the Longhorns could be undefeated right now.

Case McCoy is not a great QB, but he has managed to get it done, with some notable exceptions.  I could write a whole post describing his deficiencies (and many have), but his willingness to stop writing checks his talent can't cash, combined with his extraordinary luck when he does, has made him just good enough.  At least until we played Oklahoma State.

Burning Tyrone Swoopes' redshirt was a fiasco.  I buy into the idea of burning the redshirt to prepare Swoopes as a back-up.  The problem is the coaches didn't follow through on that goal!  They gave him precious little action, all of it in garbage time when games were already decided, and they limited his plays to the most rudimentary stuff, never expanding his repertoire.  So today, Swoopes is no more ready to replace an injured McCoy than he was at the beginning of the season.  It was a total waste of a year of eligibility for a guy who needs them, since it looks like he's going to require a lot of development time.  Heaven help us if David Ash doesn't return next year.

It's a shame that Joe Bergeron had problems with fumbles and they benched him.  I think he could have had a considerable positive impact on games.  In his limited carries, he's demonstrated more ability to break big runs than Malcolm Brown, and isn't as nearly as easy to bring down as Jonathan Gray.  I'm not saying Bergeron should have been the starter over those two, but I am saying that the team would have benefited from a greater number of snaps going his way.

I also can't help but think that there had to be more effective ways to use our three excellent running backs than to "go with the hot hand".  Especially when all of them have shone some ability to catch passes.  Why do we continually have such problems leveraging our talent?

It's great that the WRs and OL are now areas of strength!  We have had a profound lack of both production and depth at those positions dating back to the Colt McCoy days, and the situation was absolutely dreadful in 2010.  Coaches Searles and Wyatt deserve major kudos.  Too bad we didn't have a quarterback who could really exploit it.

I'm glad that the SEC might get shut out of the national championship game.  (That's still not a certainty though...)  Frankly I'm tired of all the chestbeating from that conference's fans.  [12/9/13 Update:  Looks like Auburn got in.  All things considered, they deserve it.]

Although the Longhorns' season has been a disappointment overall, I have to admit that it is fun to watch games when the outcome is not a foregone conclusion.  In the VY and Colt McCoy days, we  expected to win every game in blow-out fashion and were disappointed when the game was actually competitive.  Nowadays, we're just happy to win, and that has it's own appeal.  (Iowa State being a notable exception.  That was a win that felt worse than most losses.  And by all rights, it should have been one.)

[12/9/13 Update:  Since I wrote the post above, Texas lost to Baylor in what turned out to be the conference championship.  The game went as I expected.  McCoy's limitations were on full display, and to be fair, Baylor is simply a better team.  I think the score would have been worse if the weather had been better.  What worries me:  1) We play Oregon in the Alamo bowl - a team with some frightening similarities to Baylor.  2) Next year.  We're losing a ton of starters.  The QB situation is absolutely dire if Ash doesn't return.  Finally, for the record, I would be mightily surprised if we managed to get Saban as our head coach.  It just doesn't add up:  There's nothing that Texas could offer him (except the city of Austin) that he doesn't already enjoy at Alabama, where he's already contending for national championships every year.  On top of that, I'm not sure I'm all that crazy about having him.  His age makes him a relatively short-term solution and that grayshirting business makes me uneasy.]
Labels: lagniappe