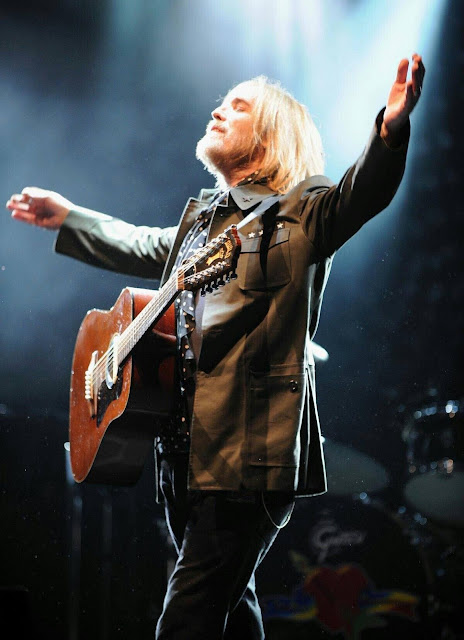 He had me at Refugee.

I would have been a freshman in high school. Just starting to play guitar myself.

I'd heard a couple of others, but Refugee was the first song by the Heartbreakers that really spoke to me. First of all, it had that sound. That heady mix of cranked-but-not-metal guitars and Hammond B-3 organ. For me, that's a combination that just can't be beat. It's the very best sound in rock and roll. The perfect combination.

Then there's Petty's voice in that song. Nasally, menacing, and cool, all at the same time.


Somewhere, somehow, somebody must have kicked you around some.

I love the way he fit what seems like to too many words into too little space, and somehow it worked perfectly with the simmering tone of the song. And when the chorus hits, Petty showed some real balls and range.

Rufugee's lyrics were a little abstract, open to interpretation. I always thought it was about emotional pain holding people back in a relationship. But Tom later said that it was about the issues he was having with his record label at the time. No matter. When you can assign your own meaning to lyrics, then the song becomes a lot more personal.

After that, I got familiar with the first two Heartbreakers albums, catching up with the previous minor hits like American Girl, Breakdown, and Listen to Her Heart.

My brother and sister had given me a great musical education. As a small child I grew up listening the Beatles, the Who, Led Zeppelin, the Stones, Creedance Clearwater Revival, the Animals, the Byrds, and so on. As I think about it now, the Heartbreakers were the perfect bridge between these '60s bands I was nurtured on, and what was current at the time I started seeking out my own music to listen to. Their influences – the Byrds, Dylan, British invasion bands, '50s and '60s blues bands – were my influences. But they were adding a contemporary spin on them.

Throughout the '80s, I followed Tom Petty. Hard Promises and Long After Dark were good follow-ups to what they were doing on Damn The Torpedoes. With Dave's Stewart's influence, Southern Accents was a bit of a departure, but a commercially and artistically successful one and I was still into it

Petty lost me a bit when the '90s rolled around. With Into the Great Wide Open, he started singing in a lower register and it wasn't as appealing to me at the time. But there's no doubt that period was still incredibly successful for him, even if I wasn't along for the ride.

I didn't get really plugged back into the Heartbreakers until around 2009 when I joined a Tom Petty tribute band in Austin. I got to play all my old favorites and I came to really appreciate those '90s and 2000s songs as well.

I remember being worried at the time that learning all the songs might wear the magic off them for me. But that didn't happen, thank goodness. In fact, it gave me a new way to appreciate them. I disassembled them, examined every part, and put them back together again. I knew how they worked and they taught me a lot about songwriting and arranging. So in addition to being affected by the songs on an emotional level, I could admire the craftsmanship involved. Especially since he had one of the best backing bands in rock history.

I also got into the lyrics more. Petty was really a remarkable writer. His lyrics were evocative, sometimes even cinematic. But he somehow avoided coming off as pretentious. In fact, his lyrics were very approachable, very "every man". He never condescended, never felt like he had to be overly literal or beat you over the head with it. He learned from the great '60s bands that you can usually say something more effectively by not saying it at all. He had perfect balance between art and accessibility in his lyrics.

I'm wondering what playing the songs will be like now that he's dead. I expect the experience to be an emotional one for awhile at least. Even though the Beatles are my favorite band, the truth is that I've learned more songs by Tom Petty than any other artist. He has left a particularly indelible mark on me. And he's associated with some of my earliest memories as a rock musician.

His death is a particularly big one, in my reckoning.

I'll miss you Tom. You've meant a lot in my life, and I thank you for the gifts you've left me.