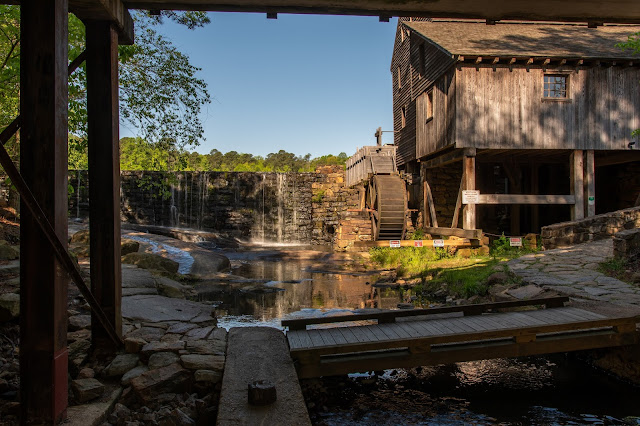 I haven't done a post-processing walk-through in quite a while, so I figured it was about time. All my processing here is done in Lightroom, but I'm not doing anything exotic. All the operations performed could be done in almost any pro-level image processing tool.

In this post, I'm going to process a photo I took at the Yates Mill park near where I live. Yates Mill is a restored gristmill that was originally built in 1756. The mill itself is lovely, but the entire park is beautiful. It's a great photography location and I'm lucky to be so near to it.

The Assessment
Before doing anything else, I assess the photo. I've seen some folks just start moving sliders, but for me that's usually a recipe for crap. I do much better when I have a point of view on things. I need to start out with an understanding of the problem areas, the enhancements that I think could improve things, and a mental concept for how I want the image to look. Then I'm not just making shit up as I go; I'm working towards something.


Straight off the camera, the RAW image shows at least one really big issue. The scene has massive dynamic range: the sky is washed out and the foreground and shadows are almost completely dark. Shooting a scene like this, I think you have four choices:
The fourth option is the one that I choose.

Despite how it looks straight off the camera, I think the composition has some merit. I like how the bridge that I was under when I shot the photo – along with the support posts, walking path, and the mill – frame the waterfall. That's pretty nice. Technically, the image is sharp and for a wide angle (18mm) shot, the perspective distortion doesn't seem too excessive.

Pulling down the exposure slider all the way, I can see that the sky isn't blown out – there's usable color in there. Okay, this photo is like a 6th round draft pick – it's a developmental project.

So I reset the exposure slider back to 0 and begin.

Exposure – When setting exposure, I usually try to tune out the image's highlights and shadows (which have their own dedicated sliders) and think of the exposure slider as a mid-tone adjuster. In truth, there aren't many mid-tones in this photo! I would say the stacked blocks to the left of the watermill, and the sections of the building that aren't getting direct sunlight would both qualify as mid-tones. Using these areas as my guide, I pull the exposure slider down just a little to -0.20. It's just enough to make the stacked blocks be balanced in terms of tonality.

As an aside, the fact that the RAW image is over-exposed in the sky and underexposed in the shadows, while also only needing a 0.20 adjustment in exposure shows you just how much dynamic range was in the scene. This is, in my opinion, a virtually impossible shot to get nice straight out of the camera.

Normally, I'd use the contrast slider next to adjust mid-tones contrast. But as I said, there aren't many mid-tones to judge. So I'll just return to contrast later as well.

Highlights – I pull the highlights slider all the way down to -100. That restores a nice blue sky. That's the way the sky looked when I actually shot the photo.

Shadows – To set shadows in a photo like this, I start moving the slider up slowly, bringing the details out of the darkness. It's always impressive to me how much detail can be pulled out of shadows in a RAW file. It is very easy to over-do this part and make the photo look weird. You always have to keep in mind that in real life, the foreground was in fact in shadow and you couldn't actually see everything! You want to bring it up enough to show some detail, but not so far that you can't tell it's shadow anymore. Setting the highlights and shadows in a high-contrast image like this is all about reducing dynamic range, but just enough to fit it into the dynamic range available in the 8-bit jpeg file and no more. You don't want to obliterate all the dynamic range, or worse, flip the dynamic range so that the foreground is lighter than the sky, which is entirely possible. Anyway, I end up setting the Shadows slider to +84, which is still a lot.

So this is what I have now.

From here, I can go back and properly assess the white balance. There are a few different ways to approach WB. One is to be true-to-color. If you really want to do that, you use a gray card and nail it when you're shooting. That is best practice for certain kinds of photography. But for this type of photo, I have more leeway to make an aesthetic choice. I can set the WB however I want, as long as it looks good to me. The colors may not be 100% true. But they may be closer to what I actually saw since the ambient lighting at the scene wasn't showing true colors either. Or it may just look nicer even if it isn't particularly accurate or representative of reality.

For a picture like this, I like to take more of the aesthetic approach while still trying to preserve naturalness. One thing that I like to do is see what Lightroom comes up with using its Auto WB button and the preset that best matches the scene descriptively (in this case, "Shade"). I compare these to the WB that the camera shot, and see which one I like best, and potentially tweak the controls to further customize it. In this case, the Auto and Shade settings looked very similar, which means that Lightroom correctly judged the scene as shade when it did its Auto WB evaluation. And as it turns out, I liked both of Lightroom's WB attempts more than the camera's. They added some color and warmth to the scene which was quite lovely and in fact was closer to how I remember the morning light when I shot the photo. So I go with Auto.

Contrast – Now there's some more mid-tones in my image. So I can go back and evaluate the mid-range contrast. I think it needs a little, but not much, more contrast. I set it to 12.

At this point, I usually set the Whites and Blacks sliders to stretch out the extreme highlights and shadows so that I'm using all the dynamic range available in the output file. It's important to be judicious with the Blacks slider – it enhances contrast in shadow areas which can be very nice, but it's easy to over-do and plunge those shadows into blackness. I settle on +22 for Whites and -5 for blacks.


Punching It Up, or Not

Microcontrast can look cool in certain kinds of photos, so I sometimes boost Clarity a little. But not so much with landscapes because too much can do ugly things to foliage in my opinion. For this photo, I think it looks pretty good the way it is. So Clarity stays at 0.

Sometimes I add Dehaze, which besides getting rid of haze is also handy for adding more broad-range contrast with minimal change to color saturation. It's a handy control. But I don't see much need for it on this photo, so it also stays at 0.

At this point in the process, if my photo still looks a little bland color-wise, I can add a little Vibrance. One thing to know is that Vibrance is selective in enhancing color – it amps the color in some areas and not others. I like to crank it all the way up temporarily just to see where it is going to have the strongest effect. In this photo, it enhances color in the trees, the sky, and the wet rocks (but not so much the dry ones). I bring the slider back down to 0, then slowly bring it up until the color starts to look unnatural. Then I back it off until the color looks natural again. At that point, it is usually still too high because Vibrance is another control that's easy to over-do and raising it slowly like I have can have a numbing effect on your judgement of it. So I do a lot of before/after comparisons using the undo (ctrl-Z) and redo (ctrl-Y) commands before I find the right setting. For this photo, I settled on +18.

In general, I never use the Saturation slider because the Vibrance control works better and achieves more natural-looking results.

So here's where we are after all the Exposure, tonality, and white balance adjustments have been made:

Distortion and Other White Lies

At this stage in the process, I start looking at any sort of lens distortions that might be detracting from the picture. My philosophy on lens distortion is that if it's not detracting from the photo, I don't mess with it. When you correct barrel and pincushion distortion, you are doing more than just re-coloring pixels. The software is moving, stretching, compressing, and aligning areas of the image in order to correct the optical problems. In other words, this isn't a trip to the tanning salon; this is invasive cosmetic surgery. And it causes a deleterious effect on sharpness. So if it isn't obviously broken I don't fix it. 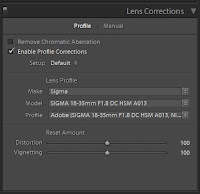 However, in this case, I can see some barrel distortion on the bridge support post near the left edge of the photo. See how it bows out a bit in the middle? It's not terrible, but now that I've noticed it I can't unsee it. I'm going to see if using Lightroom's lens corrections will improve things. I select Enable Profile Corrections in the Lens Corrections panel. Once again, I do a bunch of before/after comparisons to see if I like the results or not. I decide to roll with it and keep the profile corrections.

Okay, now the support post is straight, but it's still not square with the left edge of the frame. So I use the Crop & Straighten tool to fix it, drawing a line along the left edge of the post to vertically align it. Sometimes doing that will cause misalignment in other parts of the photo and the only way to fix them all is to use the tools in the Transform panel, which have the same sort of major surgery drawbacks as the lens corrections. But I don't see anything too objectionable, so I elect to forego that.


Come On Feel the Noise

There's nothing else I really want to do with this photo except apply a modest amount of noise reduction and sharpening. For sharpening, one thing I like to do is set the Masking slider by holding down the Alt button while I move the slider. This highlights the edges where the sharpening will be applied. I like to increase the masking setting until it is no longer sharpening areas that don't benefit from sharpening – like deep shadow areas, or large expanses of color (e.g. the sky). This is especially critical with high ISO photos because otherwise it will actually sharpen the noise, making things worse!

So now I'm done. You can see the final result in the photo at the top. And the before/after is here:


Post-processing really changes the way you think about photography. You begin to look at shooting as just the beginning of making a picture, not the end. The photo off the camera is a rough draft that you edit into a final work.
Labels: Nikon D7500 photography what i know of