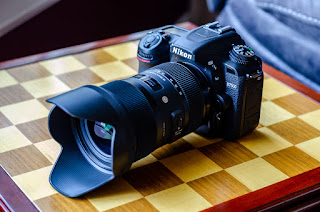 Here's the photography gear that I use and my honest opinions on everything. Each item on this list I own, I like, and I think is worth buying. But that doesn't mean it's perfect. So I'll tell you what I use, why I like it, as well as anything that don't like about it.

Cameras – I consider myself a Nikon shooter, but you can't really call me a fan boy. I could very easily live with another brand. I roll my eyes at people who get caught up in brand debates because if you can't take a good photo with a modern camera, regardless of brand, the problem isn't the camera. That said, over time I have accumulated enough of an investment in the Nikon system that it would take some fairly drastic circumstances to make me take the financial hit of switching.
Lenses
Accessories – This list doesn't include all the little stuff that you end up buying - memory cards, filters, batteries, and so forth.  Just the big stuff.
Lighting – I definitely identify with the strobist movement. That's somewhat driven by budget limitations, but I also love the portability of speedlights. Thank goodness for David Hobby, the pied-piper of strobism. The dude has taught legions of people like me how to conjure professional looking lighting from little speedlights. Having said that, I've nothing against studio flash and in fact any further investment in lighting gear will probably be in that realm.

Software – I consider post-processing to be as critical to what I do as working the camera. That's not a hip thing to say as a photographer, but it's true. I don't mean to diminish camera skills (you can't polish a turd, after all) but just like a song recording really comes to life during mixing, a photograph really comes to life during post-processing. Transforms it from "That's nice" to "Wow!"