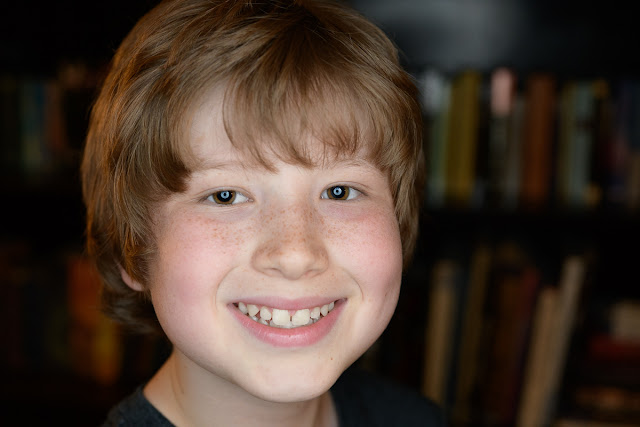 Today I'm reviewing the Neewer Round Universal Collapsible Magnetic Ring Flash Diffuser Soft Box 45cm/18″ for Macro and Portrait Photography. I'm not kidding – that's the actual name! Over my career as a marketing dude, I've had the misery pleasure of naming a lot of products. And there are things to be said for going with descriptive names (e.g. "Internet Explorer") instead of evocative names ("Safari"). But Neewer takes the description naming thing to a whole other level. I wonder how many web searches they're not showing up in by having such a ridiculous name...

Anyway, in the interests of readability and avoiding carpel tunnel syndrome, I'll just call this verbosely named doodad, "The Donut". I'd love to call it the "The Slayer Donut" since it has a pentagram in the center, but the whole point is to keep the name short and pithy. So, Donut it is. 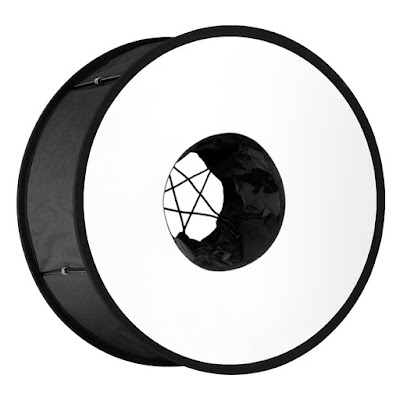 What Is This Crazy Thing?

The Donut is a lighting attachment that converts a standard speedlight into an 18" ring flash. Used on-camera, ring flash gives a characteristic uniform, shadowless, and decidedly unforgiving lighting effect. As a key light it was/is quite popular in fashion photography.  Another characteristic aspect of a ring flash is the distinctive circular catchlight it produces in subjects' eyes.

Ring flash is also used extensively in macro photography because the compact LED versions are very easy to maneuver and bring in close to a tiny subject. The Donut on the other hand, is comically big. Holding the Donut/camera/flash combo up to your face turns you into Mike Wazowski from Monsters, Inc. Its sheer size would make it awkward for macro work. (Although I'm sure I'll try it before long because, well, I can.) But the size of the Donut also makes it a more versatile. You can take it off-camera, bring it in really tight to the subject, and it will work more like a portable softbox.

There are a lot of great uses for ring flash besides photos of glamour models and insects. For instance, it makes a terrific fill light. You can add it to an off-camera key to lighten shadows while maintaining your key light's directionality. David Hobby likes to use ring flash for this, as well as to provide maximum detail in an interesting side-lit setup he uses for product photography.

I'd be remiss if I didn't mention that the Donut is a pretty shameless Chinese copy of the RoundFlash Ring. You can make a defensible case that plagiarism should not be rewarded and that photographers should pony up the extra dough for original, innovative products. I respect that. For my part, I wasn't sure if ring flash was for me, because I usually go in exactly the opposite direction – I like my lighting soft and directional. So I didn't want to make a large investment in something that I might abandon rather quickly. I expect I'll upgrade to the real-deal Ring if it becomes a go-to lighting technique for me. In the end, you have to decide for yourself.

I have to say, I was a little surprised by the apparent quality of the Donut. I had my expectations firmly in line with what you usually get when you buy a cheap copy of a popular product. But the Donut is actually surprisingly well-made for the most part. The business side is made from translucent white nylon to diffuse the light. The sides and back are made from heavier opaque black nylon. The nylon all seems of reasonably high quality and I have not detected any sort of color cast from the diffusion panel. The inside of the Donut is baffled and lined with silver reflective material to distribute the light as evenly as possible, and as near as I can tell it does its job very well.

The Donut has 5 pairs of magnetic rods around the perimeter of the ring. When expanded, each pair of rods stick together end-to-end magnetically and run from the front panel to the back panel, providing an external skeleton similar to the poles of a tent.

On paper, magnetic rods seem like one of those too-clever-to-actually-work solutions. But in reality, it works fine as long as you're reasonably gentle with it. One scenario I can think of where I just wouldn't trust it would be outside on a gusty day. Not only would the rods collapse, but the Donut would essentially become a sail attached to your expensive camera and that could end badly. But that's really nothing new – wind and lighting gear have never gotten along together very well.

To break down the Donut, you break the magnetic connection between each pair of rods, and collapse the side panel so that the front and back panels are lying flat against each other.


Then you do that twisty-foldy maneuver you do to a car sun shield to fold the Donut onto itself. The twisty-foldy maneuver is incredibly awkward to describe in text so I won't even try. It's probably easier to learn just by watching the video I linked to. Honestly, I know people who've never gotten the hang of it, including the otherwise wonderful woman I'm married to. But for those of us who've mastered it, it's very quick, easy, and effective. Anyway, folded up the Donut fits into 6" diameter bag, which is wonderfully compact.

The lens of your camera goes through the hole in the center of the Donut. The lens hole has a thin bungee cord arranged in a star pattern to suspend the Donut on the lens. This is one area where the cheapness of the Donut is apparent. It's kind of fiddly to work with and the bungee is not the highest quality I've ever seen.

At about 6 1/2", the thickness of the Donut can make working with prime lenses a challenge. In fact, the lens hole can even show up around the edges of your image if you're using a short, wide-angle lens. Similarly, zooming a lens is cumbersome and doing manual focus is enough of a hassle that I would consider it impractical. The best bet is to use auto-focus and have your zoom level set before you attach the Donut.

The speedlight is inserted into a hole at the top of the back panel. There's a velcro strap to secure the Donut to the speedlight. The strap works well enough, but it would more effective if part of it was made from elastic like LumiQuest does with its UltraStrap.


Once mounted, the Donut works pretty much like on-camera flash, except that you look slightly ridiculous and if you're not mindful you can bump into things with it like a dog wearing the Cone of Shame. When using it as a lone artificial light, I think it's easiest to use i-TTL mode combined with manual exposure and manual ISO. For tight portraits like the one at the top of this post, dialing in between -0.7 and -1.3 EV of flash compensation is usually about right. Be aware that the Donut blocks the focusing aid lights on your camera and speedlight. Not an issue for me because I never use them, but it might be for you. 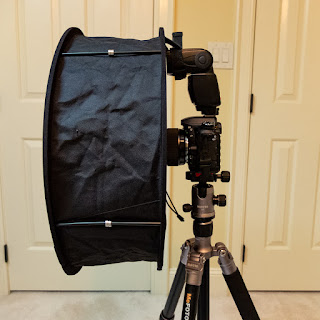 Like most other lighting modifiers, I think this thing works best when you get it as close as possible to the subject. Think about it: The usual way of shooting with a ring flash is on-axis with the lens, so you get no shadows in the resulting image. The further away the ring flash, the smaller the light source will be relative to the subject and the harder the light will be. Hard light, no shadows. In other words, the further away the ring flash, the more it looks like bare on-camera flash, which I'm almost never keen on. But bringing the ring flash in tight will soften the light, giving kind of a glowing effect on faces. And it also makes the distinctive circular catchlight in the eyes bigger and more apparent. Of course, your subject gets to be up close and personal with Mike Wazowski, so bonus!

In case you're wondering and haven't sussed it out from my photos, you can in fact use a tripod with the Donut mounted on your camera. It works just fine. And as I mentioned before, you can also use the speedlight/Donut combo off-camera for directional light. In an off-camera configuration, you're working with an 18" light source, so you can achieve pretty soft lighting as long as, once again, your Donut-to-subject distance is pretty close. Do you sense a pattern here?

I really like the Donut. Its most compelling feature is probably the $25 price tag. But it would still be 25 wasted dollars if the thing didn't work well. Fortunately it works very well indeed, providing a very lovely quality of light, and a level of versatility that I wouldn't have expected from a ring flash.