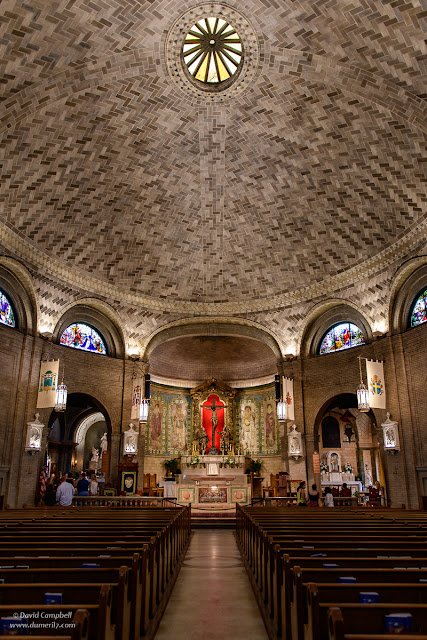 Here's another perspective on the nave at the Basilica of Saint Lawrence in Asheville, NC. Compared to the previous photo of the Basilica interior that I posted, which focused on the apse, this photo captures more of the dome, which is one of the more impressive aspects of a thoroughly impressive building. The photo was taken at 12mm on my ultra-wide zoom, so it almost looks like a vertorama.

The Basilica was designed by the Spanish architect, Rafael Guastavino who interestingly (to me, anyway) came to Asheville originally to work on Biltmore Estate. He was not the principal architect at Biltmore. But he personally oversaw the installation of several tile vault and arch systems of a design that he had patented. The Guastavino Tile Arch System is employed in the Basilica's dome, as well as in hundreds of historically significant buildings throughout the United States. Guastavino ended up retiring in North Carolina and is buried in the crypt at the Basilica.
Labels: Nikon D7500 photography