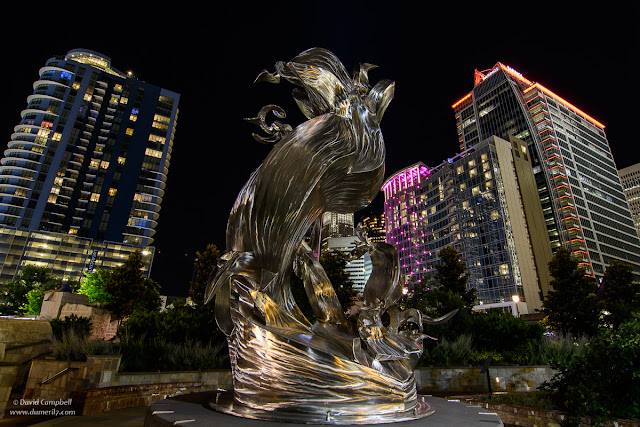 There are two types of photos that I get the most reaction from on Facebook. The first are pictures of my kids being cute. The photographic merits of the pictures don't matter much. As long as the cuteness coefficient is high, it's going to play well among my Facebook friends. My kids are rapidly approaching the age where they're not so cute anymore, so I intend to keep pumping water from that well until it's been run dry.

The second type are nighttime shots. They are always good for ohs and ahs. They just really resonate with people. And they're usually very easy to make.

You don't need much in the way of gear. A camera and a tripod is all.

The settings are pretty simple, although I go through some extra pains to ensure that the camera is perfectly still. After all, if I'm going to go through the trouble of lugging around a tripod, I just as well put in a little extra effort to eliminate any other source of blur.

Here are the settings I typically use:

Not including physically setting up your camera on the tripod, all of this is less than a minute of futzing around with your camera settings, assuming you're fairly familiar with its menu system. I use these settings enough that I've programmed a custom menu on my camera to include them so I have quick access.

If you don't have a tripod, then try to find something you can rest your camera on – a table, fence, tree, etc. The effort is worth it and your Facebook friends will be duly impressed. If you want to go for the double-whammy, then do a nighttime photo of your kids being cute!
Labels: Nikon D7500 photography