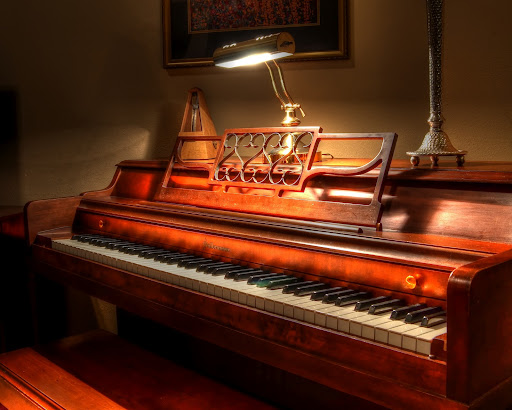 This is one of my very first HDR photos and appropriately the subject is the first musical instrument that I ever had.  The piano was purchased in the very early '70s primarily for my sister who had just started lessons.  As my mom tells the story, she wanted to get the most value out what was a big investment for my family, so they enrolled me in lessons too.   I would have been 5 years old.  As it turned out, my sister ended up quitting piano after a few years, but I somehow stuck with it until I graduated high school.  I can't say that I got genuinely great at piano, but if you do anything for that long, you can't help but gain some proficiency at it.  I think my very last recital before I graduated high school I finally got the coveted spot of being last on the the program for the recital, which was reserved for my teacher's most advanced student.  So I had finally arrived.  But by that point, I'd discovered guitar and in some ways I made more progress on guitar in 3 years than I made on piano in 12.

Years later when I bought my first house, my mother gave me the piano as a reward for sticking it out, and probably to get it out of her house!  I liked the idea of having it, but it kind of sat neglected in my living room for many years while I continued to play guitar in various bands.  But a few years ago I rekindled my relationship with piano when I joined a band playing keyboards.  Oddly after so many years focused on guitar, but advancing musically, when I came back to piano a lot of skills unexpectedly transferred over.  So in many ways I returned to the piano a better player than when I gave it up almost 30 years before.  Once I got some semblance of technique back, I was a pretty competent player.

As for the photo, I took this late at night after everybody had gone to bed.  The only light is the lamp on the piano, so we're talking long exposures.
Labels: music photography