Sometimes You Get Desperate For Subject Matter 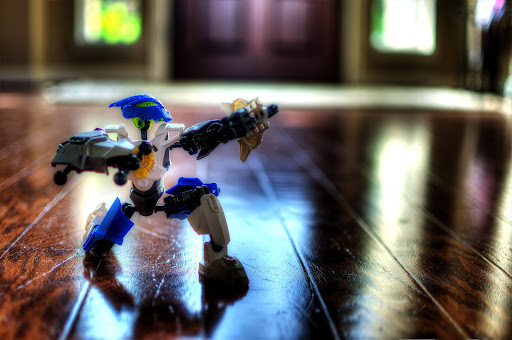 One of my kid's toys.  I would have loved toys like this when I was a kid!  Although we had GI Joe (the full-size ones, not the lame miniature ones they have now) and Joe was pretty darn cool in his time too.  On the other hand, these Hero Factory toys have interchangeable parts so my kids can concoct their own robot, which is a lot more creative.

Some technical photo info after the jump...

This is one of my first photos with my spiffy new tripod.  I got a terrific deal on a Manfrotto 055XPROB with a Vanguard SBH-250 ball head combo that had been returned to the store but was functionally and cosmetically perfect.  My old tripod served me well for over 10 years, but this is a huge and much-needed upgrade.  Before, I mainly used a tripod to hold the camera while I ran to get in place for a family photo.  But HDR requires a good tripod to get as much image sharpness as possible, as well as pixel-perfect alignment of the bracketed source photos.  So I hit the performance limits of my old tripod pretty quickly (which is gratifying in itself).  Frankly, I'm blown away by how solid, stable, and versatile this setup is.  I can only imagine what a high-end Gitzo or RRS rig must be like.  The Manfrotto/Vanguard combo is a lot heavier and bulkier than my old tripod, but the big improvement in image quality that I'm already getting is well worth it.  Below is a 100% crop of the head of the toy where I aimed my focus: 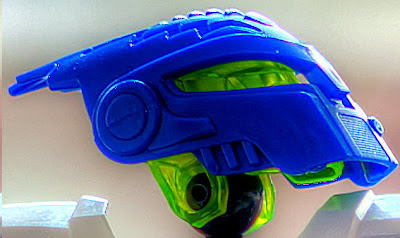 You can see that it's quite sharp -- and this is three photos merged together for HDR, which tends to soften things.  I could have stopped down the aperture (I shot it at f/1.8) to get his whole body in focus, but I like it the way it is.  Opening the lens all the way also gave the image a sort of soft glow that I think is pretty cool.
Labels: photography