What I Know Of: Exposure

Exposure is the total amount of light that falls on the image sensor (or film, if you're old school) while taking a photograph.  In layman terms, exposure affects how light or dark the image is.  Getting the right level of exposure is critical to getting a good picture and can be tricky as the dynamic range (the range of light and dark) of a real-life scene is often more than the camera can actually capture.  That said, there's no single "correct exposure" for a photo -- photographers over- and under-expose photos all the time for aesthetic reasons.  I'm just going to talk about the basics of how exposure is affected by the camera controls that influence it, and why you would pick one camera control versus another.  In future posts, I'll go into detail on those controls.

There are several ways to control how much light falls on the sensor: 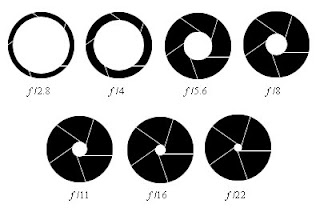 The Exposure Triangle and Reciprocity


The three camera parameters for affecting exposure -- aperture, shutter speed, and ISO -- are called "The Exposure Triangle".  Each affects exposure using different aspects of the camera's physical design.  The available values for shutter speed, aperture, and ISO are cleverly chosen so that a change to one parameter is equivalent, from the standpoint of exposure, to a change in either of the other two parameters.  In other words, selecting the next faster shutter speed results in the same reduction in light hitting the sensor as using the next smaller aperture or selecting the next lower ISO sensitivity setting.

More importantly, it means that I can change one parameter, and make the inverse change in another parameter, and the resulting exposure will remain the same.  So, if I open up the aperture by one increment (letting in more light), and increase the shutter speed by one increment (decreasing the amount of time the light is let in), the resulting exposure is the same before and after the changes.  The principle holds true for ISO sensitivity as well.  This inverse relationship between shutter speed, aperture, and ISO is called reciprocity and it's fundamental to understanding photography.  The key take-away from reciprocity is that we can get the same exposure with different combinations of the shutter speed, aperture, and ISO settings.

Side Effects of Each Parameter

Here's what the Exposure Triangle parameters affect other than exposure:

So choosing between the various combination of aperture, shutter speed, and ISO is really a balancing act of deciding how you want to affect the image properties of exposure, depth of field, sharpness, motion blur/freeze, and noise.  Sometimes what you're trying to achieve puts the various camera parameters at odds with one another and then the balancing act becomes a matter settling on a compromise.  The sheer number of combinations makes photography a highly technical craft, but the myriad resulting aesthetic choices make it an art.
Labels: photography what i know of