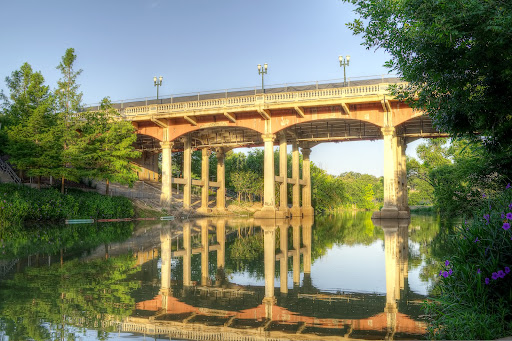 Yesterday I made an early morning trip to downtown Houston before work to try to capture a sunrise skyline shot.  I did capture some of those which I'll post later, but as I was shooting down at the edge of the Buffalo Bayou, I looked back and saw how the morning light was shining on the Sabine St.bridge and casting a lovely reflection on the still water.  So I turned myself around and shot this and it will probably end up being the best image from the session.

Technical photo information after the jump...


Obviously this is another HDR shot.  But for this one, I was trying to achieve a lighter, softer, more ethereal look.  In addition  to the HDR process, I also applied the digital equivalent of the Orton effect, which is a post-processing technique that gives you that soft, glowing look.  The Orton effect is similar to HDR in that you blend multiple photos of the same scene, but instead of blending photos taken at different exposure levels, you vary other aspects of the source photographs.  In this case, I blended one sharply-focused and overexposed image with another version that was blurry and at correct exposure.  To do this, I took the HDR output image, made two copies, applying a Gaussian blur to one and overexposure processing to other, and blended them together as layers in GIMP.  In a future post, I'll describe the process step-by-step.  Its a really cool effect when applied tastefully to the right kind of photo, but like HDR it's capable of absolutely destroying a photo if you overdo it.
Labels: photography