Lil' King of Everything 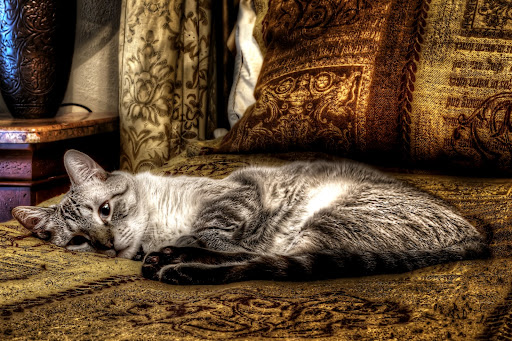 Meet Cooper.  We got him about a year ago when a co-worker's friend found him as a stray kitten.  Our previous cat of 22 years passed away the year before and we were ready to take on a new one.  Cooper has mellowed into the lazy and entitled cat you see in this picture, but he was one ornery son of a bitch for the first several months.  He's an awesome friend now though!

I like the textures, colors, and general HDR treatment of this photo, but good grief, it was pain in the butt!  (It occurs to me how fitting that is for Cooper.)  It took a lot of coaxing to turn the photo into something; and it's still a bit softer focus and more noisy than I'd like.  All the problems stem from not having sufficient light, and not compensating for that with lens selection, when I was shooting it.
Labels: photography