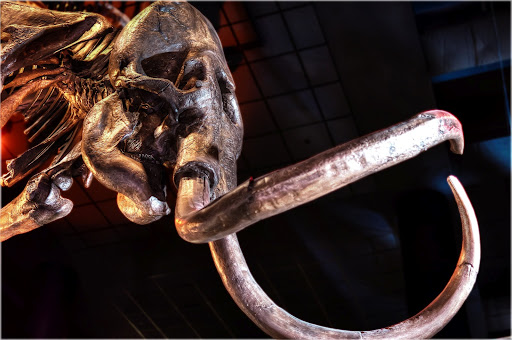 Here's another shot from the new Paleontology Hall at the Houston Museum of Natural Science.  I suspect I'll be posting a lot of these because this trip yielded a bumper crop of photos.  The Hall is about the size of football field and its just filled with skeleton mounts, fossils, and models.  Highly recommended.


Here's the original photo as it came off the camera.


It's not going to win a Pulitzer, but its not a bad shot.  I like the composition and especially the perspective of the photo, although it would have been better if I hadn't clipped off the bottom horn in the frame!  That might be a deal breaker for a pro, but I can live with it.  The depth of field is a bit shallow since I had to open up the lens so much (a flash would have utterly destroyed the terrific lighting of the exhibits). Not a perfect photo, but definitely something to build upon.

First step for me is the HDR processing.  I didn't use a tripod because the museum was crowded and it would have been majorly inconvenient for me, and majorly inconsiderate to others, if I had used it.  If I'd had a tripod I would have done a series of exposure bracketed photos because that yields better results in the HDR process.  Instead, I used the single image for the HDR.  I shoot in RAW+JPEG, so I used the RAW image to begin the process.  A lot of people go apeshit with color saturation when they start doing HDR.  (For example, check this out.)  I really don't like that look, frankly.  What turns me on about HDR is not the ability to amp up color, but its ability to amp up detail.  Stuff that was obscured by shadow, highlight, or lack of contrast, is brought out in an amazing way that for me is closer to the vividness of the actual experience than typical photos capture, emotionally if not visually.  So when I start tweaking parameters in Photomatix, I try to take it easy on the saturation and focus on bringing out detail.  Here is what the photo looked like coming out of Photomatix: 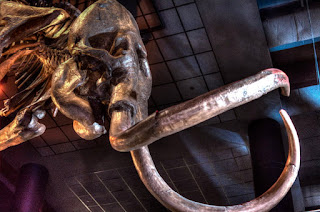 I definitely liked the effect on the bones.  The enhanced surface detail really gives them a nice texture.  I set up the color tones to emphasize the fact that the bones are supposed to be ancient.  Now they actually look really, really old.  If all I did was the HDR treatment it would still be much more engaging image in my opinion.

But one thing I didn't like about the HDR process for this photo was that it was overly effective at bringing out shadow detail in the ceiling in the background.  Now you can see pillars, rafters and ceiling tiles, which are just a distraction.  I liked the way that the original photo underexposed all that and made the mammoth stand out.  So my fix was to do some layer masking to restore the dark background.  Going into detail on layer masking is beyond the scope of this post, but at a high level, it involves "stacking" the HDR image on top of the original camera image, then selecting portions of the HDR image (in this case, the background) to make semi-transparent so that those portions in the original image bleed through.  It's pretty straightforward to do, but it is time consuming to select all the background.

In addition to layer masking, I also ran the image through some noise reduction software to remove some graininess from shooting it at ISO 1600.  I also sharpened the image using GIMP's unsharp mask tool, and did some contrast enhancement using GIMP's Levels tool 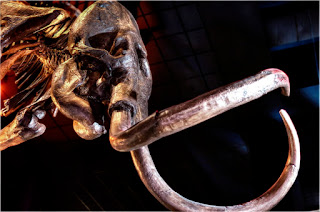