And It Holds Cars Too! 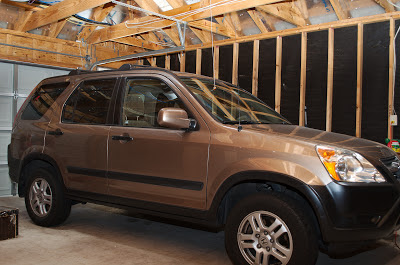 Okay, this isn't a great photo, but it has a somewhat interesting story behind it from a photography point of view.  I was in my garage taking in-progress photos of some cabinets that I'm finishing for my wife's library/office.  I've got my speedlight mounted on the camera, and aimed for direct flash (I'm just documenting the progress, so having pretty lighting isn't a concern).  I decide while I'm at it to take a quick shot of my car for fun.  That picture with the direct flash looked particularly crappy because of the rapid fall-off of light from the flash.  (This phenomenon is described by the inverse-square law which is explained in excruciating detail in the Wikipedia link, but which I'll summarize as, "Light falls off faster than you think the further you get from its source.").  My instinctive photographer thought is, "Is there any way to broaden the light source?".  Mentally I had already eliminated bouncing the flash off the ceiling because my garage is a detached structure with a hip roof and open framing (i.e. the walls and ceiling are not finished out), so there's not the usual ceiling to bounce off of.  But I look up anyway and I'm reminded that the inside of the roof is covered in radiant barrier, which is shiny silver on the inside.  In other words, the de-facto ceiling of my garage is a reflective tent -- basically, a ginormous reflective umbrella!  My instinctive photographer thought now is, "Bad ass, I gotta try that!"  So I aim the flash up into the rafters and after a few tweaks to flash exposure compensation and ISO, I get the photo above.  It certainly solved the rapidly falling light problem - the car is pretty evenly lit, especially considering it was done with a single small speedlight.  Made me want to go into the house, grab my other speedlight and see if I could improve it even more.  But alas, the cabinets weren't going to finish themselves.
Labels: photography