What I Know Of: Auto and Program Mode

Way back in June, I wrote a post that was intended to be the first of a series of informational articles on photography called "What I Know Of".  The idea of the title being that I'm nowhere near an expert, but I'll certainly share what I do know.  For various reasons, I hadn't gotten around to writing additional articles, but here is finally the next installment.  That initial post covered exposure, including the exposure triangle as well as the photographic side effects of the camera settings that affect exposure.  It covered all of this rather conceptually, rather than pragmatically, because I think the best way to really understand this stuff is to get your head wrapped the concepts, then dive into exactly how to apply it.  So, this post begins a series which will apply what we learned about exposure to the ubiquitous "exposure modes" available on a camera.

First up, Auto and Program modes. 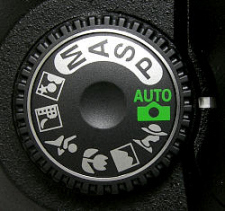 Philosophically, Auto mode is the camera equivalent of the automatic transmission in a car.  You give up control for ease of use, allowing the car to select when to shift and what gear to use based on engine and driver input.  In Auto mode, the camera will evaluate the lighting coming off the scene, as well as try to guess what your artistic intent is, and then select aperture and and shutter speed settings to get what it believes will be a good picture.  It will even automatically pop up and fire the flash if it needs to.  The photographer has little or no ability to override the camera's decisions.  Now, modern cameras are incredibly sophisticated in their evaluation of scenes, being able to compare the scene to a database of literally thousands of commonly encountered "template" scenes.  They're remarkably good at recognizing situations like backlighting, silhouetting, night-time shooting, heavily-shaded faces, etc. and coming up with a reasonable exposure solutions that incorporate elements like depth of field and motion stopping into the equation in response to what it thinks you're trying to achieve.  Auto mode is great for taking point-and-shoot snapshots where you're more interested in the event than the photograph and you don't want to have to think about the best way to shoot the scene.

Cameras aimed at the consumer market often have additional Auto modes called "scenes" or some similar name, depending on the manufacturer.  Scenes basically optimize the exposure and other settings for particular shooting scenarios such as portrait, night-time, and beach scenes.  My camera has 17 of these scenes.  By selecting one, you're sort of helping the camera make more intelligent choices by telling it at a high level a little bit about what you're shooting.  And with a wide enough variety of scenes, a person can just dial up the right scene for a situation and start firing away.

The limitation is that despite the sophisticated technology, Auto mode isn't always right and has the aesthetic sense of a well designed paint-by-numbers kit.  It can only make educated guesses about the scene it's looking at and what you're trying to achieve, and it is often conservative in it's choices to the point of being bland, and sometimes just flat-out wrong.  It's pretty easy to confuse a camera into making poor choices either on purpose or by accident.  But with Auto mode, you have to live with those choices.  Some people prefer automatic transmission and some people prefer stick-shift.  I like automatic transmission in cars, but when it comes to photography, I'm a stick-shift kind of guy (although I'm not above using an automated clutch if I can stretch the analogy past its breaking point).  I enjoy the process of photography as much as the result.

The next step in the progression from full automation to full manual is Program mode.  Program is very similar to Auto mode in that the camera is making the exposure decisions, setting the aperture and shutter speed.  The difference is that you have the ability to override the camera's choices if you see fit.  The Program mode of most modern cameras allows the user to select different combinations of aperture and shutter speed that result in the same exposure the camera has deemed as correct (courtesy of the principle of reciprocity as we discussed in my exposure post).  In this way, the camera maintains the exposure but the photographer has artistic control over depth of field or the motion stopping/blur of the photograph.  Program mode is useful when you want to mostly just point and shoot the camera, but may occasionally want to override the camera's choices in order to manipulate the depth of field or motion blur/stop.

So how is the camera making these exposure decisions?  Most cameras over the last 30+ years have built-in light meters that measure the light coming from the scene.  Going deeply into metering is at least one post unto itself, so I'll just stick to basics.  In the case of DSLR cameras, the light is measured after it has gone through the lens using a very sophisticated system that can concentrate it's readings on a single spot (when you absolutely, positively have to expose a particular object in the scene correctly); weighted toward the center of the frame (for portraits); or considering the entire scene as a whole.  A modern metering system can factor brightness, color, and subject distance in it's decision making, and when metering the entire scene, it can compare the scene to a database of thousands of common scenes (stored on the camera) to determine the correct exposure required.  And it does all this literally in the blink of an eye.  Pretty cool stuff.  The camera's metering system is what makes the various automated and semi-automated exposure modes possible.  It also helps the camera obtain and maintain focus and determine automated white balance settings.

In the next article in this series, I'll talk about the "semi-automatic" modes, which put one variable of the exposure equation completely in your control, while automating the others.
Labels: photography what i know of