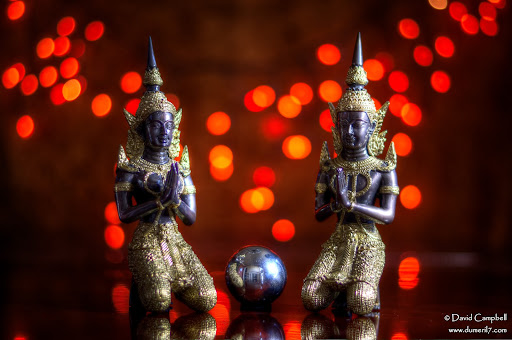 I got inspired by a photo on Muddled Ramblings & Half-Baked Ideas that had an excellent example of bokeh, the anglicized Japanese name for the aesthetic quality of optical blur of objects in a photo that are outside the depth of field.  The Muddled Rambler used a lust-worthy portrait lens with a f/1.2 maximum aperture.  f/1.2 produces a massive, Jacob's Ladder scale, gaping hole of light to hit the sensor.  It also produces a depth of field measured in millimeters (especially at the distance the Rambler was shooting) meaning that everything not in the tiny slice of in-focus area in the photo will be modeling that lens' bokeh.  Now, I should be so lucky as to have an f/1.2 lens, but I do have an f/1.8 which ain't too shabby.  In my shots, I set up a backdrop consisting of a coppery brown chenille blanket, draped over a couple stands, with orange Halloween lights hung over it.  Nothing says "See my bokeh!" like twinkly lights.  For the foreground I used some nicknacks we have in the house.  And of course to throw things over the top, I shot my photos as HDR composites to amplify the details of the figurines.

Click on the photo to go to the Picasaweb version, zoom in 100%, and you'll see some knucklehead's reflection in the Baoding ball.  That would be me.  An unintended cameo appearance.  I thought I was out of the frame, not accounting for the ultra-wide angle reflection of a round ball. 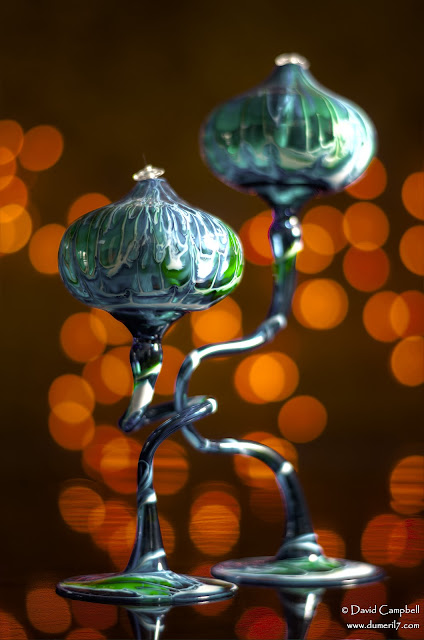