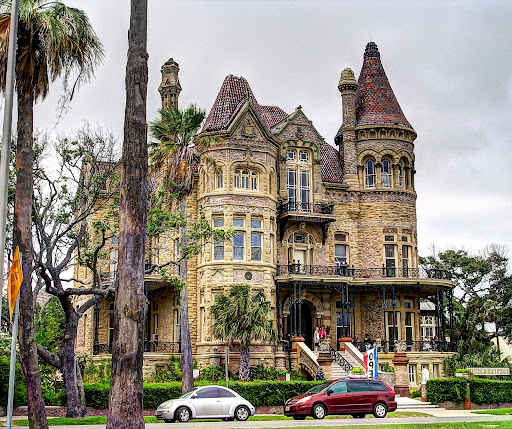 I'd had this image sitting in my old camera for months but I'd forgotten about it until last weekend.  I took this back in April when we went to the beach in Galveston and I didn't want to bring my new camera (the sand on Texas beaches is extremely fine - powder-like in fact - and gets into everything) so I brought the old one.  We passed by a number of amazing, old Victorian mansions and I pulled over to get a photo of this one which is now a tourist place.  I was a numbskull and neglected to bring a tripod because I thought I wouldn't need it, so this is a 3-shot HDR with me trying to stabilize the camera on the roof of my car!  It's a miracle that it came out as sharp as it did.  Unfortunately, it was the middle of the day, the sky is drab, and all the tourists and cars are distracting from this amazing house.  I've made a mental note to get back down there for a sunrise one day.

I didn't know it until recently but at the beginning of the 20th century, Galveston was the largest and wealthiest city in Texas.  The infamous Galveston hurricane of 1900 wiped the city out, killed an estimated 8,000 people (far and away the most in US history), and cratered the port-based economy which never recovered and led to Houston becoming the economic center of the region.
Labels: photography