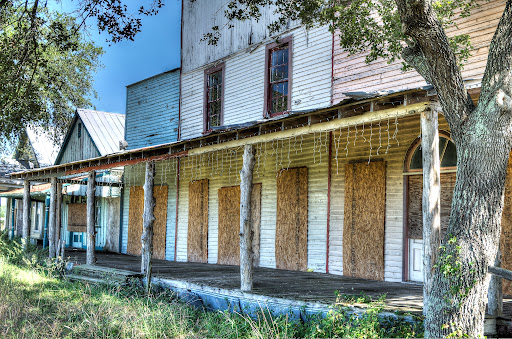 Since moving to Texas in 1989, every time I drove on US 290 from Austin to Houston, I passed a little abandoned hamlet full of colorful but faded old buildings.  It was a neat little place as seen from the highway and I'd always wondered about it.  Well, finally this last weekend I stopped to get some photos, and when I got home I did a little Google research on it.  Winkelmann, TX was not a real town and it's not a real ghost town, at least in the common sense of the word.  Apparently a businessman in the nearby town of Brenham had been collecting old buildings from around Texas.  In the 1980s he installed a couple dozen or so at a site on 290 near Chappell Hill with the idea of creating a tourist stop populated with quaint shops, a restaurant, a saloon, and even a few residences.  Winkelmann TX was in fact a tourist stop for a time, but an economic downtown killed the tourism and eventually all the shops closed down.  Later, the original owner died and the property passed hands a few times.  Now the buildings are in a state of progressive decline and they've boarded up the windows and doors to keep squatters out.  I said Winkelmann wasn't a real ghost town, but technically it is because although it's not as old as it appears, and it was never a state-recognized town, it is a community that has been almost completely abandoned by its inhabitants and so it meets the basic criteria in my book.  In any case, it still makes a nice picture.  There does appear to be at least one occupied home on the property and that kept me from getting as many photos as I would have liked.  There was after all a very conspicuous "No Trespassing" sign that I ignored to take the dozen or so shots that I did get.
Labels: photography