The Fujifilm X20 and Parallax 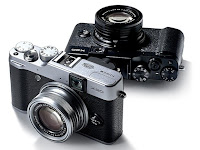 I received a Fujifilm X20 tonight and have been playing with it.  I intend to post a review of it once I've had more time with the camera.  But I did want to post something about how its optical viewfinder (OVF) and focusing system deal with parallax, which I think is rather clever.

If you've only ever shot with SLR, DSLR, or mirrorless cameras, the X20 can be a bizarre experience!  When you're using the OVF, the camera will seemingly place the focus area indicator in random locations and sizes!  It's actually not random and is a nifty way to handle parallax, but it's not intuitive and it's not explained in the manual.  Here's what's going on:


First you have to understand parallax.  On a viewfinder camera like the X20, the OVF and the lens are completely independent views of the scene.  Those views follow separate lines of sight that are a few inches apart. This causes objects to appear in slightly different places in the photo than they are in the OVF.  Your own eyes have a parallax effect.  If you stare at a close-by object with one eye shut and then quickly switch to the other eye (and maybe even go back and forth between each eye), the object will appear to move in your field of vision.  Try it, you'll see what I mean.  Parallax is actually a very good thing in human eyes because without it we would not have depth perception.  The human brain processes the two different views to gauge distance and size of objects in the scene.

This phenomenon is exactly the same thing that's going on with a camera that has a viewfinder that doesn't peer through the main lens.  For distant objects of, say, 12 feet or more away, the difference in perspective between the the OVF and the lens is negligible.  But for close objects it can be dramatic:  A nearby subject you place right in the middle of the frame of the OVF will appear higher and over to the side in the resulting photo.

Now, the X20's focusing system is working off the lens' view of the scene, not the OVF's view.  So, setting the focus area to the exact center of the LCD frame will result in it being slightly off-center in the scene displayed in the OVF.  How far off-center depends on the distance to the subject; the closer the subject the more off it will be.  It logically follows then, that if you have the focus area set to the center of the LCD frame, and then you use the OVF to focus on a nearby object that you've place in the middle of the OVF's frame, the focus area may not actually be on your object!

If that focus area is not where you really wanted it to be, then you should recompose your photo to place your subject under the corrected focus area location.  Then let go of the shutter button, and reacquire focus before shooting your picture.  Re-acquiring focus is important because the focus was initially set to a different location than you were actually going for.

I've read people on the Internet complain bitterly about the OVF not showing where the focus area is until after the half-press, but that's actually not accurate.  If you press the AEL/AFL button, the OVF will show you the location of the focus area.  However, it won't be corrected.for parallax!  So for close subjects, this display is likely to give you the wrong idea about the actual location of the focus area, and this misinformation is likely to cause focusing issues for these close-up subjects.  The X20 needs to know the distance to the subject before it can calculate the parallax-corrected location of the focus area on the OVF, and it can't know the subject distance until it's tried to focus on something - thus, the half-press.  Despite that, it's much better to half-press the shutter button to find the focus area because that's much closer to reality.  (I will say, however, that the AEL/AFL button is useful just to know which of the 49 possible focus areas you've selected, in case you've forgotten.)

To reiterate:  When taking photos of nearby objects, set up your shot, half-press the shutter, and see where the X20 puts the focus area.  Move the camera to put your subject in the focus area, then take your finger off the shutter button, half-press it again, and take your picture.  Kind of a pain in the butt, however, in the golden days of rangefinder cameras you didn't have any sort of correction and you had to develop a feel for how to place your subject in the OVF so that it was composed correctly in the photo.  And you didn't get to find out how well you did until you processed your film!  So stop yer whinin'.  ;-)  Once I figured out what was going on, I found myself developing a feel for anticipating where the X20 was going to place the focus area and thereby avoiding having to recompose the shot.  And that was in the few short hours I'd been playing with the camera.  But it's nice to have a system that doesn't rely on feel and guesswork.

Now, that answers why the focus area in the OVF moves around.  Why does it change size? The X20's OVF has a grid of boxes it uses to draw the actual focus area.  It chooses the box closest to the corrected focus area and renders that box in green (the others remain invisible).  The actual focus location, however, may not line up nicely with one box in the grid.  It may fall on a boundary between two boxes, or it may fall at the intersection of four boxes.  If that happens, the X20 will render both (or all four) boxes in green to indicate this condition.  It doesn't really matter, the procedure is the same -- just center your subject in the resulting green focus area whatever its size, reacquire focus, and take your picture.

This is all a pretty reasonable system in my opinion. Is it more complicated than a DSLR?  Absolutely.  But a better comparison would be to the rangefinder cameras of old, and its pretty helpful compared to the "feel" approach required with those cameras.

Labels: Fujifilm X20 photography what i know of