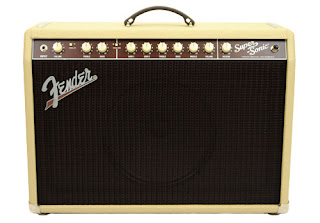 Went to practice last night and discovered that somehow I'd misplaced my pedalboard power supply. Not sure what I did with it. But without it, my pedalboard is basically a boat anchor. Had to just plug straight into the rehearsal studio's amp. It was a Fender Super Sonic 22, which I'd been wanting to try out anyway. The Super Sonic's clean channel is pretty much standard Fender, which is to say clear, punchy, and bell-like. One of the reverb tubes was microphonic (rehearsal studio amps are never well maintained) and the reverb fed back like crazy, so I can't speak to how that sounded. But I expect it was good sounding, as Fender reverbs usually are. The dirty channel on the Super Sonic is just flat-out odd. First it has two gain controls, one being kind of bright sounding and the other dark. In operation, it's kind of like bridging the inputs on an old 4-hole Marshall, which I'm very familiar with. By setting the relative balance between the gain controls you can emphasize saturation in either the highs or the lows, which adds some flexibility. But in order to get a good sound to my ears, the tone controls have to be set to positions I normally wouldn't use with other amps. I had to really crank the mids to get a a nice sound out of it. It is also excessively bright and thin at very low volume (no matter where I set the EQ controls). I don't think it would be usable for me at really low volume. But cranked up even a little (say, about 3 on the master volume) and it fills out on the bottom end. Because of all the midrange you have to add, the Super Sonic 22 doesn't work well for scooped mids sounds, but that's fine by me because I don't care for that sound anyway. That gain channel is also a little boxy and compressed sounding in my opinion. I could live with the amp, but for the $1200 they ask for them new, I think there are more inspiring choices. 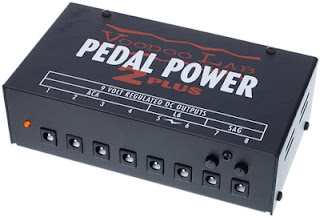 So the studio amp got me through practice but I still needed a power supply. Today at lunch I went to the local bigbox music store and sprang for a Voodoo Lab Pedal Power 2 Plus. The Pedal Power is almost an industry standard. They've been around for a long time and lots of pros use them because they just work without much drama. My old power supply was a Godlyke Power-All, which worked fine with most 9V pedals but produced a strange electrical interference noise with certain modulation pedals, including the chorus side of my Visual Sound H2O pedal. I'd always wanted to replace the Power-All with a Pedal Power due to this issue, but Pedal Powers are comparatively pricey and it never seemed that urgent while my Power-All was working okay. But I decided to pay the ransom now that I needed a new one anyway. The Pedal Power has fully isolated outputs so all the pedals are electrically isolated from one another so there is no funky noise problem. It also has a lot of options to work with pedals that have oddball power requirements. If it lasts (and it seems to be built like a tank), this should be the last one of these things I'll need. Fingers crossed...
Labels: music tone musings