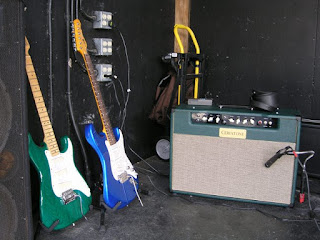 Not to be confused with The Nuge, who is an imbecile.

When it comes to guitar tone I haven't tried every piece of gear in the world, but I have tried just about every approach. Guitar straight into the amp; pedals into clean amps; switching between multiple amps; amps with multiple channels; MIDI-controlled rack systems; digital modeling - whatever it is, I've used it at some point in my playing life. They all have advantages and disadvantages, and you have to choose the one that makes the most sense for your playing.

My favorite approach for several years is decidedly old school: Take a good, simple tube amp (preferably without a master volume) and just crank it up until it gets a nice, crunchy overdrive sound. Which for me, is somewhere between Keith Richards and Malcolm Young in terms of general tonality and overdrive level. Probably a bit more on the Malcolm side of things. That means somewhere between 10:00 and 2:00 on the volume, which is loud. But that's where the magic happens with tubes. If I'm not turning up to at least 10:00, then honestly I just could just as easily do with a solid state amp because tubes don't give up the glory until pushed.

A big part of my preference for this approach comes from the guitar sounds that inspired me as a kid. All that '60s and '70s rock - the Beatles, the Who, Hendrix, Clapton, the Stones, Led Zeppelin, Mountain, the Allman Brothers, AC/DC, Tom Petty, Queen, Van Halen - all that music was made by setting tube amps to stun. Distortion pedals, master volumes, digital modeling - they're all useful (maybe even required) for certain situations, but in the end, they're all imitations of cranked tube amp tone. And in my opinion, there's still nothing like the real deal.

There's an incredble visceral feeling playing a cranked amp teetering on the edge of chaos. Picking lightly gives you a clean but simmering sound, and laying into it makes it scream. Best of all you can get any variation in between those two by altering your picking attack. That tactile response gives you wonderful real-time control over your sound and you can exploit that not only for different sections of a song, but also within individual phrases. That control causes me to pay a lot more attention to playing dynamics and that in turn makes my playing more expressive. You can also roll back the volume a little on the guitar to clean up the sound. Or you can activate a booster pedal (typically an overdrive pedal set up with minimal drive and an output level somewhere above unity gain) to get more sustain, volume, and saturation when you need it, like for a wailing solo. Putting an overdrive (one that's actually set up with some gain) or a fuzz pedal in front can send it over the top in a good way. In fact, I very much like the sound of stacked distortion devices so that's another advantage.

I call this approach "The Nudge" because really what you're doing is optimizing around one good sound, and then nudging the amp a bit in different directions to get variations on that sound. All the variations sound great because they're based on a great fundamental tone. And they're instantly accessible and continuously variable - no channel switching required (although you can make a valid argument that hitting a boost pedal is the equivalent).

The downside of this is volume. Even a 15 watt amp is quite loud when turned up. And it's even worse in today's world because there's a lot less tolerance for high volume at gigging venues then there used to be. And as a guitarist you have to deal with it. If you blast overly loud at a gig, I can promise you that you won't be playing at that venue much anymore (unless you're really drawing a huge audience, but that's another post for another day).

I use a variety of things to deal with the volume issue. My go-to amp has a half power switch that cuts the power down from 30 to 15 watts, so first I'll engage that. If that's not enough - and it usually isn't - I'll use an attenuator (in my case a Trainwreck/Kendrick Air Brake). These things aren't perfect but I find that I can knock the volume down with an attenuator 3 to 12db without neutering the tone too badly. If that's not enough, my amp also has a defeatable master volume that I'll engage to get a few more db's of reduction, but that's my last resort. If I can't get it to a reasonable volume for the gig using those things, then I'll fall back to setting the amp up for a good clean tone and using pedals for my dirty sounds.
Labels: music tone musings