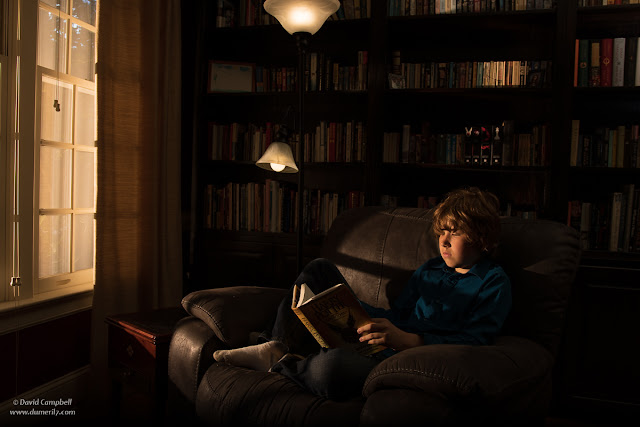 I've been working my way through the Lighting 103 tutorials at Strobist.com as well as re-reading The Hot Shoe Diaries by Joe McNally. Both of those works are heavily (or entirely in the case of Lighting 103) concerned with the coloration of flash using gels. That's definitely an underdeveloped aspect of my game. When it comes to coloring my lights, most of my efforts have been directed at neutralizing color casts using tungsten/fluorescent gels and corresponding white balance settings. All this reading about it, has really inspired me to get more creative with it.

So today I recreated a thing that McNally does a lot – shooting a speedlight through a window to emulate window light. But in this case I also gelled the speedlight with a full CTO to make it look like a sunset.

The key light is outside on a stand, shooting through the window pretty much level with the subject's head. I didn't use any sort of light modifier, just straight-up flash so that it emulated the point light properties of the sun. I did zoom the strobe head slightly to 70mm.

I also bounced a speedlight off the ceiling in the room to raise the shadow floor a little so the shadows weren't totally plunged into blackness. The bounce light was gelled with a 1/2 CTO.

I couldn't use CLS to control my speedlight because I didn't have line-of-sight to the outside light. So I triggered the key light with  Yongnuo RF triggers and the bounce light using optical triggering. I shot the camera and flashes using manual everything, which made getting the key light dialed in a logistical hassle. Getting dialed in took a few cycles of: take a shot, assess the preview and histogram, run outside, adjust the speedlight, and run back inside.

I was pleased with what I was seeing on the camera LCD. But after getting them onto the computer, I saw two problems. First, I was a bit heavy on the warmth. That was a pretty easily fixed by cooling down the white balance in Lightroom a bit. Not a lot, but enough to make it a bit less intense. Better to get it right in-camera, so next time I'll try 1/2 or 3/4 CTO on the key.

The second problem was that my bounce fill light was too weak. The overall tonality is just too dark. That can also be compensated for in Lightroom, but I was limited in how much I adjust because the shadow levels were so low that some of the color information was lost and cranking up the exposure looked kind of weird. So the overall tonality of the photo is lower than I'd like, even after post-processing. Once again, the best way would have been to get it right in-camera. I can pinpoint exactly where I went wrong in my process too. I should have set up the fill light first so that I established the shadow level by itself. That would have made it really clear, even on the camera LCD, that my shadows were just too dark. So, get the fill light right before setting up the key, and watch the shadow levels carefully.